The controversy regarding the Islamic swimsuit has led to an increase in popularity in sun-beaten Australia. 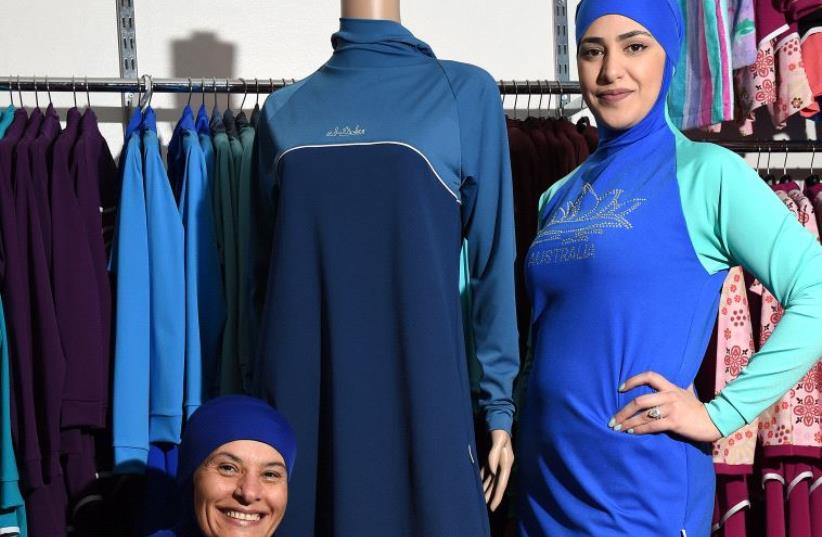 Muslim women wearing the burkini in Western Sydney
(photo credit: SAEED KHAN / AFP)
Advertisement
The burkini bans in France have increased both interest and sales in the full-body Islamic inspired swimsuit, especially amongst non-Muslim women, the Australian designer of the garment said, according to the Guardian. The burkini has sparked controversy in France with 15 towns banning the swimsuit in the south-east of the country after heightened tensions since deadly terror attacks. Aheda Zanetti, the Australian-Lebanese who claims the trademark for the name burkini and burqini, claims that the controversy has attracted publicity for her creation, which she designed over a decade ago.The 48-year-old from Sydney said that she ordinarily receives around 10 to 12 orders on Sunday but “I can tell you that online on Sunday, we received 60 orders – all of them non-Muslim.”Many messages she received came from cancer survivors and swimmers who use the lightweight, two-garments to protect their skin from the sun. Zanetti said: “The support I’m getting is somehow about empowering women ... I feel like I’ve been a counselor. It’s a cry of need that they want to have this enjoyment."“Women are standing together on this. It doesn’t matter what race or religion.”Zanetti claims that the swimsuit is misunderstood and said: "I wanted to create something that would blend in with the Australian lifestyle and allow for modesty," according to the Daily Mail.