US Defense Secretary James Mattis expressed faith in the nuke accord's importance despite the president's clear aversion to it, just as the world looks to the US to lead the policy on Tehran. 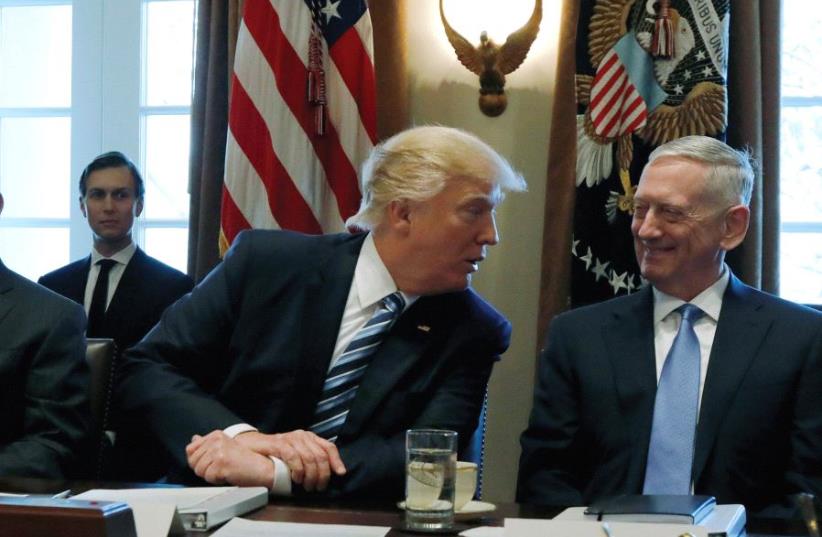 US PRESIDENT Donald Trump is flanked by Secretary of State Rex Tillerson (left) and Defense Secretary James Mattis at the White House
(photo credit: REUTERS)
Advertisement
WASHINGTON – President Donald Trump’s defense secretary told Congress on Wednesday that it is in America’s interests to preserve its nuclear accord with Iran, despite his boss’s assertion last month that the international accord is an “embarrassment” to the United States.Speaking to a Senate panel, James Mattis said Iran is abiding by the technical terms of the Joint Comprehensive Plan of Action.“The point I would make is that if we can confirm that Iran is living by the agreement, if we can determine that this is in our best interest, then clearly we should stay with it,” Mattis said. “I believe at this point in time, absent indications to the contrary, it is something that the president should consider staying with,” Mattis added.Asked to answer “yes” or “no” whether it was in the US national security interest to remain in the deal, Mattis, a career hawk on Iran, answered bluntly: “Yes, I do.”
US Secretary of Defense James Mattis suggests sticking with Iran nuclear deal, October 3, 2017. (Reuters)
The hearing comes amid a debate within the administration as to whether Trump should “decertify” Iran’s compliance to the JCPOA under American law. That would prompt a 60-day review period and debate within Congress over whether to slap back sanctions on Iran, effectively ending its participation in the agreement.Iran’s foreign minister, Mohammad Javad Zarif, says that decertification is an “internal” US matter and that a Republican Congress may well decide to preserve the accord, regardless of the president’s actions.Indeed, several Republican lawmakers have voiced skepticism over the president’s decertification strategy, including the GOP chairmen of the Senate and House Foreign Relations committees, Sen. Bob Corker of Tennessee and Rep. Ed Royce of California.Nevertheless, Trump told the UN General Assembly last month that the international community had not heard the last of his complaints over the nuclear deal, which he campaigned against in his race for the presidency.The nuclear deal brokered by the Obama administration is “an embarrassment to the United States, and I don’t think you’ve heard the last of it, believe me,” Trump said in his first UN address. “We cannot abide by an agreement if it provides cover for the eventual construction of a nuclear program.”