Temporary logo for 2019 Eurovision in Israel
(photo credit: COURTESY KAN)
Advertisement
Despite the rumors and sensationalized reports about where next year’s Eurovision Song Contest would take place, planning for the 2019 Eurovision in Israel officially kicked off this week. Officials from Kan, Israel’s public broadcaster and host of next year’s competition, met Tuesday with representatives of the European Broadcasting Union in Geneva to get planning underway.Both EBU and Kan said that a wide range of issues were discussed but decisions on the host city, date and other details have yet to be decided.“Kan is a new body and we were given the gift of hosting the Eurovision after exactly a year of operations,” said Kan CEO Eldad Koblenz. The public broadcaster stressed that the planning is just beginning, and it expects another 7-10 working meetings to take place in Geneva as well as other additional gatherings. 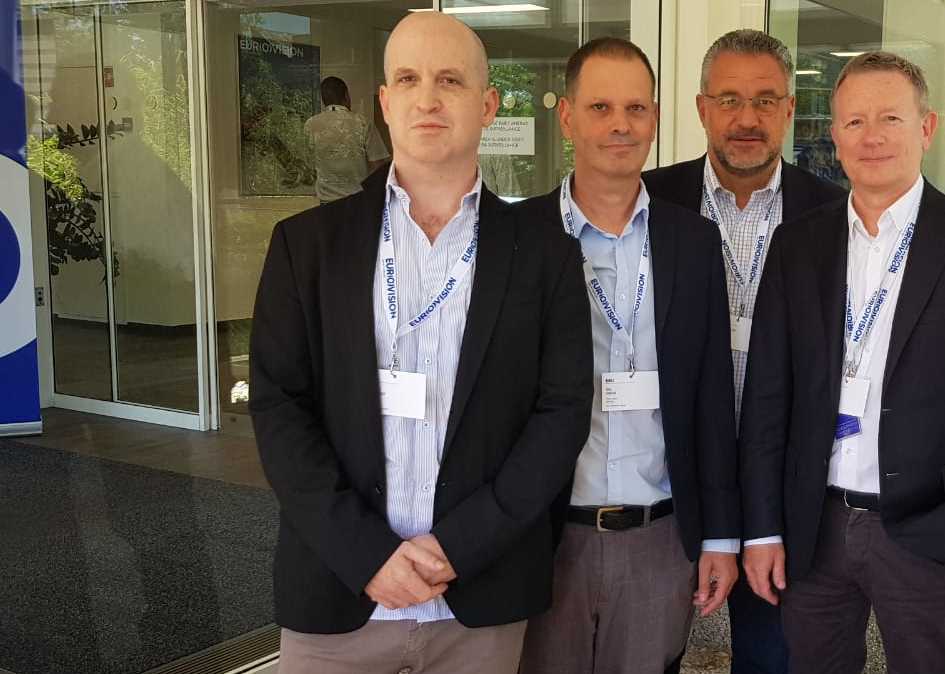 (L to R) Kan CEO Eldad Koblenz, Kan chairman Gil Omer, Frank-Dieter Freiling and Jon Ola Sand of the EBU.At the meeting, RTP, Portugal’s public broadcaster which hosted the 2018 show, officially handed over the reins to Kan.The EBU noted that the date and host city of the competition will be announced by September, as is the norm each year.“Planning for next year’s event has started and, as in previous years, a decision on which city will host the contest will be made following a bid process,” the EBU said in a statement.Kan added that – as is required by the EBU – it would present at least two options of host cities for next year’s competition.While many Israeli officials have stressed that it must be in Jerusalem, other options like Tel Aviv, Haifa and Eilat have been suggested as potential alternatives.While many decisions have yet to be made, Kan is not wasting time getting things underway. On Tuesday it announced that it had appointed longtime producer Yuval Cohen to serve as the editor and chief producer of the competition.Cohen, who was working for Channel Ten, previously worked at Reshet on shows like The Voice and Dancing with the Stars.Kan also released a temporary logo for the competition which will be redesigned when the host city is announced.Kan chairman Gil Omer said the broadcaster stressed to the EBU that it is an independent body, and “promised to take all measures to hold a worthy and respectable Eurovision that will meet all expectations.”According to Kan, the EBU stressed the need to coordinate with the Israeli authorities on security but to ensure the independence of all content in the production.