Expecting an Iran deal, White House and Congress prepare to do battle 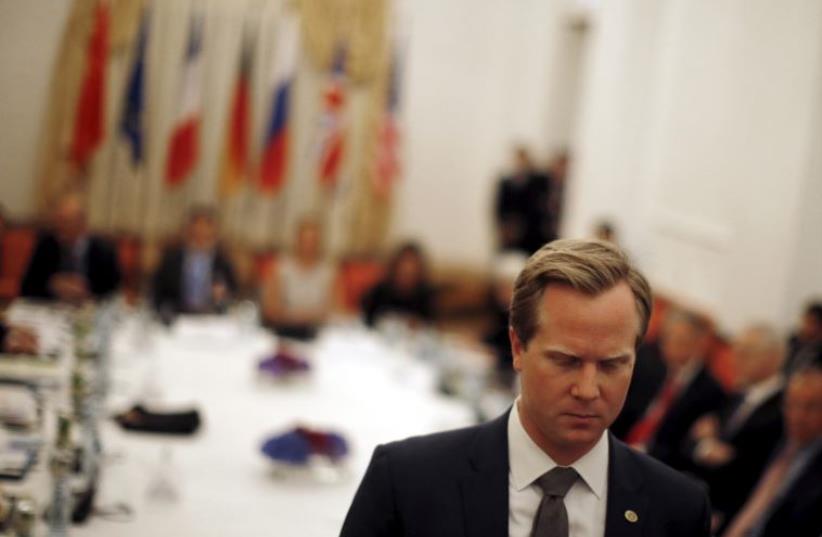 A member of the US delegation asks reporters to leave a room where foreign ministers from the P5+1 and EU meet during the Iran talks in Vienna, July 7, 2015.
(photo credit: REUTERS)
Advertisement
VIENNA -- Negotiations between world powers and Iran over its nuclear program continued on Wednesday with hardly a murmur from diplomats as they ran through their thirteenth straight day at the effort.Meetings, mostly between US and Iranian delegates, maintained pace and resulted in some progress, according to one State Department official, after a late evening of meetings the night before featured a series of tense exchanges.One such moment, according to Russian press, saw the European Union's foreign policy chief, Federica Mogherini, state her intention to depart the talks here in Austria's capital. Iranian Foreign Minister Mohammad Javad Zarif allegedly shot back a warning against "threatening" Iranians.The Iranian delegation did not deny the incident, but in comment to its press corps, expressed Zarif's respect for Mogherini and her foreign minister colleagues.Without a breakthrough, diplomats have entered a new deadline that presents a whole new set of challenges for the Obama administration. The United States Congress will have double the time beyond July 9— from 30 to 60 days— to review any final nuclear agreement that emerges from Vienna.And the deal may not be done, but Washington is preparing as if it is. Congressional committees are scheduling hearings, several leadership members are readying statements and leadership, from both parties, are defining the goalposts for success in the negotiations."We’ll be looking to see how the administration has done on Congress’ red lines," House Foreign Affairs Committee chairman Ed Royce (R-California) said on Wednesday. "Did we get anywhere, anytime inspections? Full Iranian transparency regarding its past nuclear activities? No large-scale, immediate sanctions relief, but guaranteed, workable sanctions snap-backs? Meaningful restraints on Iran’s nuclear program that last decades?"None of those standards are expected to be fully met in a final nuclear deal with Iran, anticipated to close this week. The deal seeks to cap, restrict, monitor and partially roll back Tehran's nuclear work for a limited period in exchange for sanctions relief on the Islamic Republic.Royce knows that, as do his Republican colleagues. And so does the American Israel Public Affairs Committee, which is preparing to cast the agreement as the result of weak diplomacy played with a once-strong hand.AIPAC rarely chooses to battle a sitting president, and believes its strength as a lobby is predicated on its maintaining bipartisan support. But with the Israeli public virtually united in opposition to the emerging deal, Washington's largest pro-Israel organization is now preparing to engage fiercely in the debate.Leadership in both houses of Congress, which are both under Republican control, will have to choose among holding a resolution of approval, a resolution of disapproval, both, or neither. The decision is a strategic one, and has not yet been made, sources close to the process tell The Jerusalem Post."It could go really both ways– a resolution of approval or a resolution of disapproval," said one senior Democratic aide, who added: "I think barring a catastrophe, an override vote is a tough measure for critics to succeed on."Republicans will stand in absolute opposition to whatever deal is produced, based on their broad criticism of a political agreement framing the deal reached in Lausanne back in April.But Democratic lawmakers will face a choice. Several who have been critical of perceived US concessions will nevertheless struggle to oppose President Barack Obama's signature foreign policy achievement."I have had several conversations with [US Secretary of State John Kerry] and meetings to say, ‘Look, you create just as much of a legacy walking away from a bad deal as you do headlong rushing into a bad deal,'" Senate Foreign Relations Committee chairman Bob Corker (R-Tennessee) said earlier this week. "I would just hope that they would take their time and finish this in the best way that they can, even though we have already gone down a bad track."A senior administration official here in Vienna said that the US delegation is not considering deadlines "created here or elsewhere" in the negotiating room.And the White House also downplayed the significance of Congress' deadline on Tuesday."Just because we may be in a period where this agreement is subject to a 60-day review by Congress, that actually reflects the more than 30-day August recess that Congress will take," White House press secretary Josh Earnest said. "So the 60-day review period may require additional delay, but it doesn’t necessarily ensure additional scrutiny. It’s not as if Congress is going to spend the entire 60 days studying the agreement."The review period, vote and oversight powers were all secured for Congress by the Iran Nuclear Agreement Review Act of 2015, which the Senate passed in May with an overwhelming 98 votes. The president agreed to sign it into law after it clarified that the deal did not require congressional approval.While Prime Minister Benyamin Netanyahu adamantly opposes the emerging deal, Obama says there is no realistic alternative. As he has argued to the prime minister, he will similar argue to congressional Democrats that a vote against the deal may be a vote for war by default.Hearings on the prospective deal begin on Thursday in the House in "anticipation" of a nuclear agreement. They will intensify, quickly, should a deal be adopted."I think everyone understands that once we leave here, we are in less control of what happens in this negotiation," the senior official said. "It gets more complicated, not less complicated."