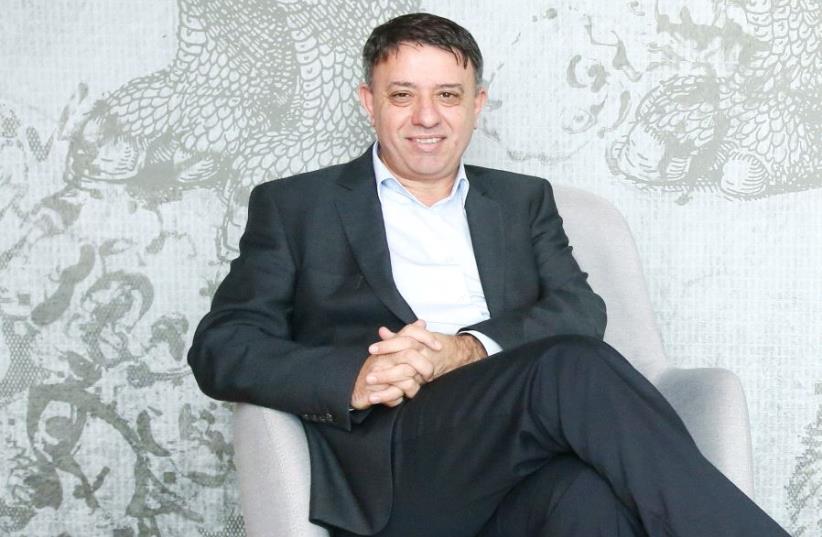 Avi Gabbay
(photo credit: MARC ISRAEL SELLEM)
Advertisement
Unlike US President Donald Trump, Prime Minister Benjamin Netanyahu and other leaders who have adversarial relationships with the press, new Labor leader Avi Gabbay is shaping up to be a media darling.
Gabbay wins Israeli Labour Party leadership (credit: REUTERS)
Gabbay received very positive coverage in the Hebrew media, which has not written in favor of the Labor Party since its previous chairman Isaac Herzog blew his lead over Netanyahu in 2015 and lost the general election.But there has still been plenty of misinformation out there about what would happen soon after a Gabbay victory. Now that Gabbay has emerged victorious over six other Labor leadership candidates, the time has come to separate the truth from the fake news.1. A general election is on the wayFalse: There had been speculation that Netanyahu would initiate an election following the Labor race, because the victor would be strongest immediately after the race, take support away from Yesh Atid and split centrist and left-wing voters.In such a scenario, Yesh Atid would cease to be a threat to the Likud, leaving Netanyahu’s party as the largest by far. Recent arguments between Netanyahu and Bayit Yehudi and the prime minister’s concessions to haredi (ultra-Orthodox) parties had also fueled speculation that he was bound for an election.But the main reason for elections would be for Netanyahu to earn another four years in office before the criminal investigations against him intensify and perhaps even use the elections to put the probes on hold. That could still happen, but it has nothing to do with Gabbay or Labor.2. Zionist Union splitting upFalse. Herzog spread this lie as part of his campaign spin. His claim was that he was the glue needed to keep the Zionist Union together, because of his good relationship with Hatnua leader Tzipi Livni and his skill at getting people to get along.The truth is that Livni has nowhere else to go. That job at the United Nations she was rumored to be getting hasn’t materialized. She met with Gabbay last Thursday and she will meet with him again soon.What might happen is that the second slot on the Labor candidates list would be reserved for Livni, and the other MKs in Hatnua would have to fend for themselves. This would not be the first time she has abandoned her party loyalists. Their political careers could be over.3. Unity government on the wayFalse. There had been reports that Netanyahu intended to make a new effort to build a national unity government with Labor after Herzog would be reelected. According to one report, American envoy Jason Greenblatt was banking on such a scenario.Reports then shifted to Livni, who indeed negotiated joining Netanyahu’s government but ultimately said no. The chances that Livni will take Hatnua into the coalition because of differences with Gabbay or significant progress in the peace process remain very slim.4. Top politicians retiringFalse. In America, when politicians are defeated, they go home and retire or get a real job. Not so in Israel, which does not recycle as much paper or plastic but is very good at recycling its politicians.So, no Amir Peretz is not retiring to Sderot and Herzog is not going back to his law firm in Tel Aviv. They are both sticking around, and they will probably both run again next time.5. Top generals arrivingToo soon to say. Had Peretz won, he could have made a serious effort to bring in former IDF chief Gabi Ashkenazi, who was his director-general in the Defense Ministry before he appointed him chief of staff.It is not known whether Gabbay has ties with Ashkenazi or former IDF chiefs Benny Gantz and Shaul Mofaz. But he does have close connections with former IDF chiefs and defense ministers Ehud Barak and Moshe Ya’alon. Barak is an electoral liability, so reserving a slot of him on the Labor list would be unwise.Gabbay quit Netanyahu’s cabinet to protest Ya’alon’s firing. Ya’alon congratulated him on Twitter following his election victory, urging him to start off on the “Right” foot. Chances are that Ya’alon would be seen as too right-wing for Labor, especially its doves like Shelly Yacimovich and Stav Shaffir.6. Bloc of parties being formedFalse. Yair Lapid already started mocking Gabbay, rather than looking to form a political bond with him. Gabbay has not been on speaking terms with Kulanu head Moshe Kahlon since he (Gabbay) left the party. Even former Yisrael Beytenu MK Orly Levy-Abecassis made a point of saying Tuesday that she intends to run on her own, heading her own party. That does not leave anyone with whom to build a bloc.7. Massive rise in support for LaborTrue. The Zionist Union under Gabbay would win 20 and 24 seats, according to polls broadcast Tuesday on Channels 2 and 10, way up from the single digits of the party's nadir under Herzog. Yesh Atid fell to the third place in both polls and Lapid fell behind Gabbay in the category of fitness to be prime minister. Netanyahu still wins that category by a hefty margin and the Likud is comfortably in first place, but Gabbay and his party have come a long way.