Following Guinea, Chad expected to be next African state to renew ties with Israel

Chad severed ties with Israel in 1972 after coming under intense pressure from its Arab neighbors, Libya and Sudan. 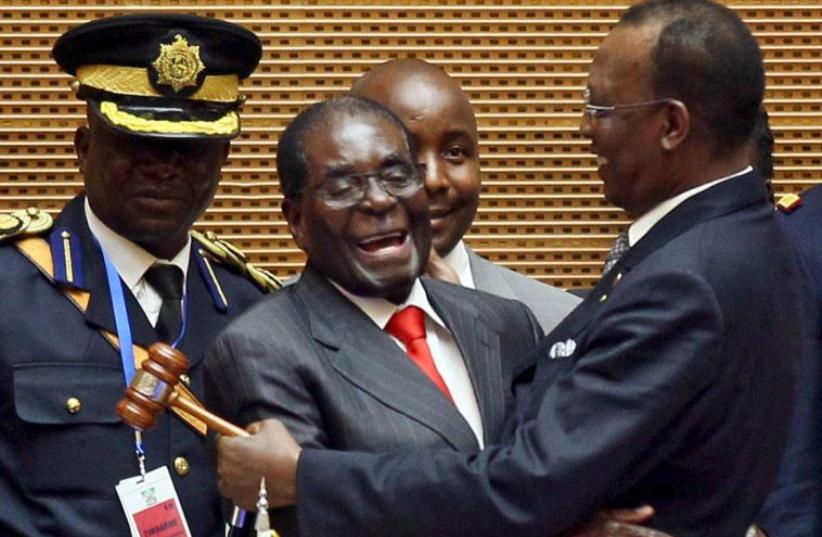 Zimbabwe's President Robert Mugabe (C) talks to Chad's President Idriss Deby (R) after the opening ceremony of the 26th Ordinary Session of the Assembly of the African Union
(photo credit: REUTERS)
Advertisement
Israel's inroads into Africa continues, as Chad – which has suddenly found itself on the front lines in the battle against Islamic extremists – is expected to be the next majority-Muslim African state to re-establish ties with Jerusalem, The Jerusalem Post has learned.Guinea and Israel announced the re-establishment of ties on Wednesday, and Prime Minister Benjamin Netanyahu – who visited four east African countries earlier this month – said that another African country would soon follow suit.Chad severed ties with Israel in 1972 after coming under intense pressure from its Arab neighbors, Libya and Sudan.  The Post reported earlier this month that delegations from Chad and Mali, both countries in northern Africa, were in Israel recently. Chad, like Guinea, is a member of the 57-nation Organization of Islamic Cooperation. US Brig. Gen Donald C. Bolduc, the commander of the US military's special Operations in Africa, was quoted in April in the New York Times as saying that the “Lake Chad basin is ground zero” in the fight against militant Islam in Africa.In April, an arms shipment believed to be from Islamic State fighters in Libya was confiscated near the Libya-Chad border. It was headed for the Lake Chad area, apparently intended for Boko Haram, raising concerns that the two terrorist organizations were now cooperating closely. Boko Haram is active in Nigeria, Cameroon, Niger and Chad.Diplomatic officials said that a major impetus for the surge in African interest in better ties with Israel has to do with a desire to tap into Israel's expertise regarding how to combat radical Islamic terror. These countries, many of them facing significant terrorist threats, are interested in receiving counter-terrorist training from Israel for their elite military units, as well as access to Israeli intelligence and technology.In addition, one senior official said, Israel's close security ties with Egypt and Jordan -- as well as well-known but under-the-radar contacts with Saudi Arabia and Persian Gulf countries -- have convinced many African countries that they no longer have to be worried about Arab pressure against developing ties with Israel, since the Arab states themselves have ties with Israel.Both Kenya's President Uhuru Kenyatta and Ethiopia's Prime Minister Hailemariam Desalegn said as much publicly during press conferences with Netanyahu when he visited their countries earlier this month.It is obvious, the official said, that Israel and many of the African states now share a common enemy in Islamic extremism, and the African states are interested in benefiting from Israel's experience dealing with it.Meanwhile, Togo's president Faure Gnassingbe is scheduled to arrive for a visit next month, as Netanyahu is interested in going to west Africa in the near future, and holding a summit with countries there similar to the one he held this month in Uganda with the leaders of seven east African countries. Gnassingbe is considered a possible candidate to be a driving force behind putting together such a summit.