Is Gaddafi’s son returning to politics?

Saif al-Islam Gaddafi, while hiding in the vast southern Libyan desert, was captured by the powerful Zintan armed militia in November 2011. 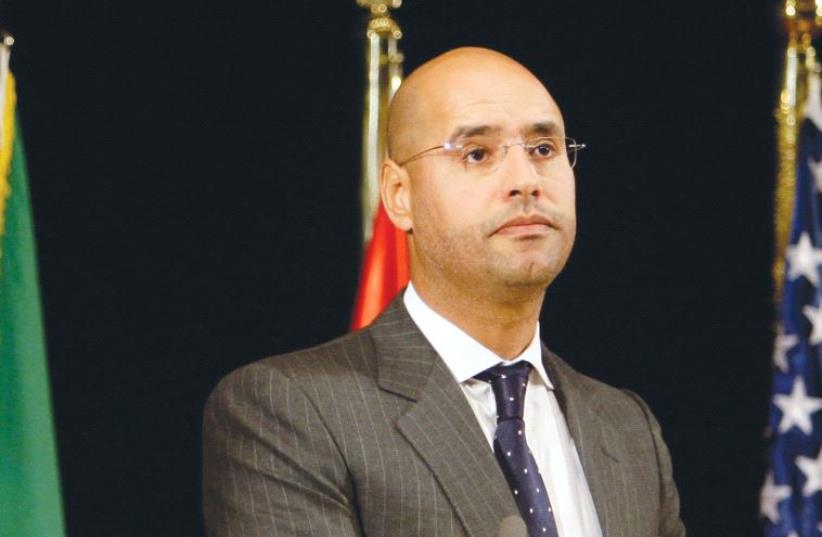 SAIF AL-ISLAM GADDAFI, son of Libyan leader Muammar Gaddafi and chairman of the Al Qaddafi International Foundation for Charity and Development, addresses students and staff at the American University in Cairo, in 2010.
(photo credit: REUTERS/AMR ABDALLAH DALSH)
Advertisement
A cloud of mystery surrounds the goals of those behind the recent release from prison of Saif al-Islam Gaddafi, the son of the assassinated Libyan dictator Muammar Gaddafi.Prof. Yehudit Ronen, a leading expert on Libya and the African Sahel region at Bar-Ilan University, told The Jerusalem Post that Gaddafi, who was the designated heir to lead Libya, is still wanted by the International Criminal Court and a Libyan death sentence still hovers over his head.“His recent release has aroused discussion in Libya and abroad. Does the Zintan armed militia that released him envisage his return to the center of the Libyan political stage?” asked Ronen, a political scientist and author of the acclaimed Qaddafi’s Libya in World Politics.Saif al-Islam Gaddafi, while hiding in the vast southern Libyan desert, was captured by the powerful Zintan armed militia in November 2011, several months after the collapse of the regime in Tripoli.About five years later, Ronen elaborates, “after being imprisoned in a well-guarded jail in a town in the Western Zintan region, the Zintan militia, which adamantly refused to turn him over to the Libyan government, released him from prison.”The Zintan militia, along with its powerful political and military rival, the Misrata militia, controlled the foci of power in post-Gaddafi Libya.The surprising move was reportedly made under a general amnesty.“The release of Saif al-Islam brought him again to the political forefront, notwithstanding his well-known and hateful statements during the 2011 bloody war against the fighting rebels, including the Zintan forces, vowing to fight them down to ‘the very last bullet’ and threatening that ‘rivers of blood will flow through all cities of Libya.’ “Does the Zintan armed militia, whose members were once allied with his father and served in Libya’s army, wish to seize his political charisma, experience and diplomatic talents and connections to gain the upper hand in Libya’s chaotic and violent struggle, which has reached in fact a tragic stalemate?” she asked.The Libya expert added that other questions remain, such as the place of his current hiding as well as whether other Libyan and non-Libyan players were behind the release.“What were their goals in releasing Saif al-Islam?” Whatever the answers, says Ronen, the disintegrating and dysfunctional Libyan state, which is torn up by civil war as well as by a determined war by Islamic State, which seeks to deepen its hold on the oil-rich and strategic Sirte region, “requires the utmost creative moves to help post-Gaddafi Libya curb its slide into the abyss.”