Mixed feelings in Greece to the outline of financial bailout drawn up by IMF and EU. Riots on streets of Athens protesting plan's effects on workers.

By ASSOCIATED PRESS, JPOST.COM STAFF
MAY 2, 2010 20:38
Riots in Greece 311
(photo credit: ap)
Advertisement
The finance ministers of 16 EU nations that use the euro were holding an emergency meeting in Brussels to discuss a plan — the first-ever bailout of a euro-zone country — under which euro-zone countries and the IMF will extend loans to Greece over three years.The exact amount of the three-year package will be agreed on during the meeting, but is expected to be about €120 billion ($160 billion).Earlier Sunday, Greece outlined strict measures, including cuts in civil servants' salaries and pensions, and tax increases, as part of an agreement reached late Saturday night with the IMF and EU."We are called on today to make a basic choice. The choice is between collapse or salvation," Greek Finance Minister George Papaconstantinou said before flying to Brussels."I think that this is the only way for us to return the euro to stability," German Chancellor Angela Merkel said of the Greek bailout which Germany is playing a major part in. 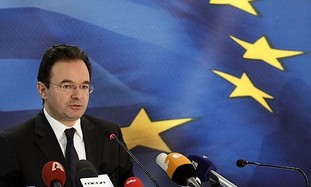 GreeceGreek unions planned a general strike Wednesday against the cuts. Violent clashes broke out Saturday during anti-government protests at May Day rallies."These are the harshest, most unfair measures ever enacted. That is why our reaction will be decisive and dynamic. You can't always make the workers pay for the results of failed policies," Stathis Anestis, spokesman for Greece's largest umbrella union, GSEE, told The Associated Press.

Anestis indicated the union wants the EU to offer more labor protections."We are asking all Europeans to think again: What kind of Europe do they want? What kind of society? What kind of employees?" he said.
Advertisement
Subscribe for our daily newsletter