Hurricane Irma was upgraded to a Category 4 hurricane as it regained strength on its way to Florida.

By REUTERS
SEPTEMBER 10, 2017 10:31
The aftermath of Hurricane Irma on Saint Martin island in the Carribean
(photo credit: HANDOUT/REUTERS)
Advertisement
FORT MYERS, Fla - Millions of people huddled in shelters or in battened-down homes in Florida on Sunday morning as Hurricane Irma, one of the most powerful storms ever recorded in the Atlantic, prepared to make landfall with 130-mph (210 kph) winds and catastrophically high seas.
Florida Coast Guard makes rescue during Hurricane Irma
The National Hurricane Center forecast potentially deadly storm surges - water driven ashore by the winds - of up to 15 feet (4.6 m). As the northern edge of the storm reached the Florida Keys archipelago off the tip of southern Florida, lashing rains and winds knocked out power to hundreds of thousands of people on the mainland. 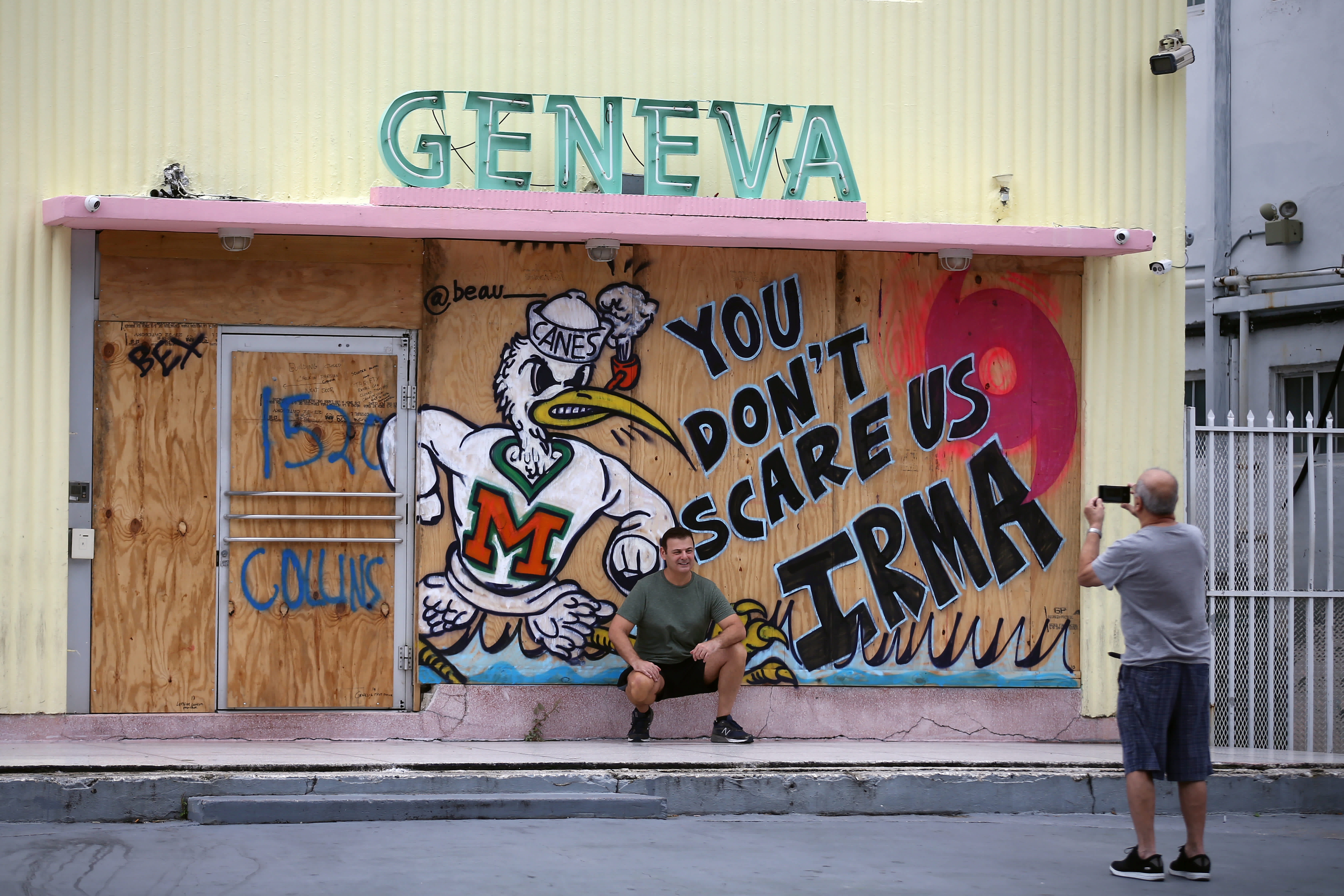 A tourist poses for a picture outside of a shop in South Beach, Florida prior to Hurricane Irma (CARLOS BARRIA / REUTERS)"Pray for us," Florida Governor Rick Scott said in an ABC News interview as his state braced for the massive storm, which has already left a trail of destruction through the Caribbean.Irma, which prompted one of the largest evacuations in US history, was a Category 4 hurricane about 20 miles (30 km) east-southeast of Key West, Florida, as of 8 a.m. EDT (1200 GMT), the NHC reported.A day after hitting Cuba's northern coast, Irma was on a path that would take it along Florida's Gulf of Mexico coast near population centers including Tampa and St. Petersburg, the NHC said. Hundreds of thousands of people spent the night in emergency shelters.
Florida starts to feel Hurricane Irma"s fury (Credit: REUTERS)
Irma is expected to roar up Florida's western coast through the day on Sunday, with hurricane-force winds extending some 80 miles (129 km) from its center. Forecasters also warned tornadoes could form in large portions of the state."Take action now to protect your life," the National Weather Service in Key West advised. "This is an extremely dangerous and life-threatening situation."The storm made landfall in Key West on Sunday morning, with wind speeds at 130 mph. Since hitting land, the storm has been downgraded to a Category 4 hurricane. Officials in Florida have ordered a total of 6.3 million people, or about a third of the state's population, to evacuate, creating massive traffic jams on highways and overcrowding shelters. The evacuation is one of the largest in American history. As of Sunday afternoon, one person had died in the wake of the storm, though the man, yet to be identified, was killed in a car crash. It is unclear still whether the crash occurred because of an accident in the evacuation. Irma, which killed at least 22 people in the Caribbean, was likely to cause billions of dollars in damage to the third-most-populous US state.Close to 600,000 homes and businesses were without power as of Sunday morning, according to utilities.Wind gusts near hurricane force began to batter the Florida Keys late on Saturday, the NHC said, with Key West seeing gusts of up to 89 mph on Sunday morning and water levels about 2 feet (61 cm) above normal.SEEKING SHELTER 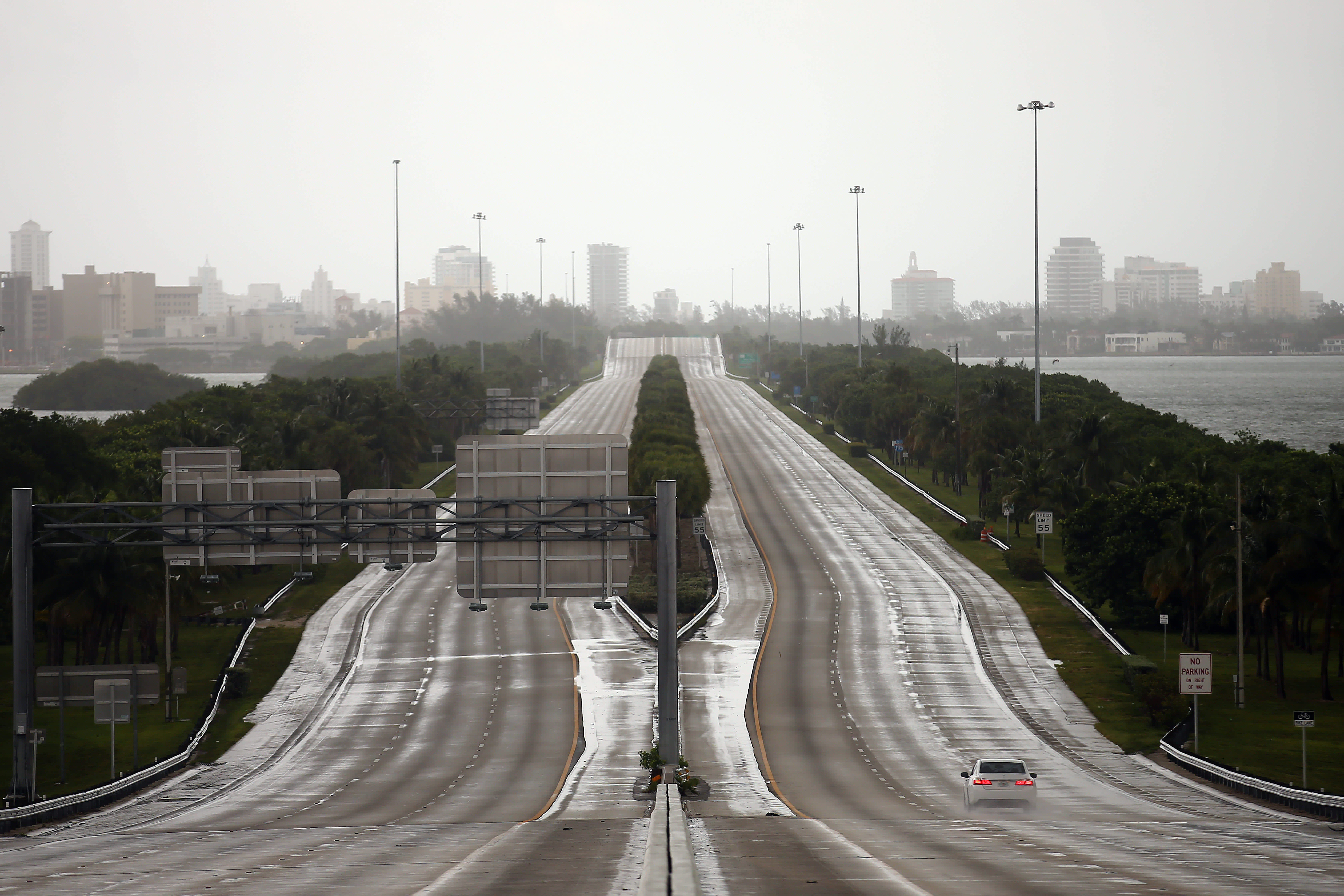 A car drives along an empty highway in Miami before the arrival of Hurricane Irma in South Florida (CARLOS BARRIA / REUTERS)The NHC has put out a hurricane warning and a tropical storm warning stretching through almost all of Florida into Georgia and South Carolina - an area where more than 20 million people live.Irma comes just days after Hurricane Harvey dumped record-setting rain in Texas, causing unprecedented flooding, killing at least 60 people and leaving an estimated $180 billion in property damage in its wake. Almost three months remain in the Atlantic hurricane season, which runs through November.MIAMI A GHOST TOWNTracking models showed Irma will make landfall on the Keys and head along Florida's west coast, slamming the state that is a major tourism hub, with an economy comprising about 5 percent of US gross domestic product.Amid urgent warnings from state officials to evacuate before it was too late, downtown Miami was all but abandoned on Saturday.On Florida's west coast, resident Charley Ball said he expected a storm surge to completely engulf the island of Sanibel where he lives."Just left the island and said goodbye to everything I own," said Ball, 62.In Cuba, the destruction along the north central coast was similar to that suffered by other Caribbean islands over the last week as Irma plowed into Ciego de Avila province.It was the first time the eye of a Category 5 storm made landfall in Cuba since 1932, state media said, and the island's Communist government ordered the evacuation of more than a million people from its path.