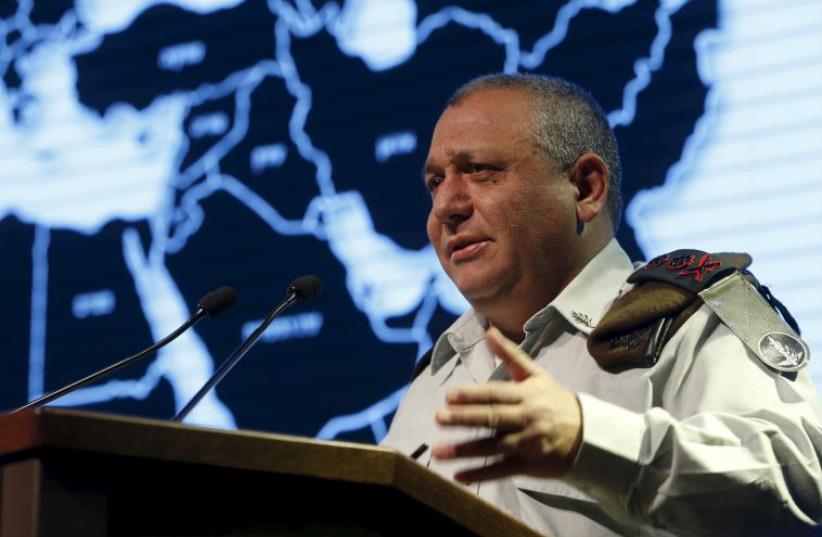 Gadi Eisenkot
(photo credit: REUTERS)
Advertisement
IDF Chief of Staff Lt.-Gen. Gadi Eisenkot is in Washington on a working visit where he will attend a counter-terrorism conference hosted by the United States, the military said Sunday.While in Washington, the chief of staff will meet with military leaders from around the globe at the third annual conference of the chiefs of staff to discuss counter-extremism strategy organized by chairman of the Joint Chiefs of Staff Joseph Dunford.“During the visit, the chief of staff will hold working meetings with US security and military officials, as well as a series of meetings with foreign military leaders, in which they will discuss shared challenges, recent events in the region, regional and security developments in the Middle East and military cooperation,” read a statement by the IDF.Eisenkot will also meet with Dunford, Central Command (CENTCOM) Commander Gen. Leonard Votel, and US Army’s European Command (EUCOM), Gen. Curtis Scaparrotti.The deputy chief of staff, Maj.-Gen. Aviv Kochavi will replace Eisenkot as the head of the military in Eisenkot’s absence.The military leaders are expected to discuss ways of combating violent extremist organizations, as well as lessons learned from military operations, and how to identify ways for joint assistance between armies as well as essential cooperation issues.It will be the second time that Israel participates in the conference, which was attended by the chiefs of staff of 70 nations and the commanders of the US combatant commands last year.Last year, the conference spoke about the Islamic State group, which was regarded as “the most virulent example of violent extremism in the world,” read a statement released by the US Department of Defense at the time.Four years after the Islamic State blitzkrieged through the Middle East, once controlling nearly half of Syria and large parts of Iraq, the group is reported to have lost more than 90% of its territory, including almost all of its de facto capital of Raqqa in Syria and Mosul in Iraq.While the group has been largely dispersed across the deserts of Iraq and Syria, the group is still regarded as a major threat to countries around the globe.Even after the group’s territorial “caliphate” collapsed, the group’s ideology remains popular among a large number of disenfranchised youths across the globe. The jihadist’s expertise in online propaganda allows it to continue to operate as a “virtual caliphate” urging their supporters to carry out attacks in their home countries.Israel’s intelligence community has helped thwart dozens of terror attacks around the globe planned by Islamic State and al-Qaeda militants by sharing intelligence with other countries.