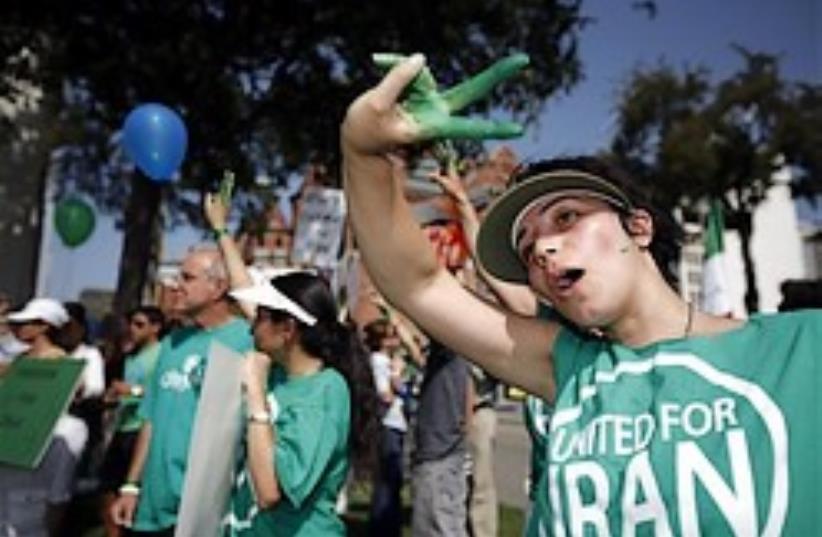 Iranian police prevented hundreds of people who gathered at a Teheran cemetery Thursday from holding an event to commemorate those killed in the violent clashes with the regime last month.

Witnesses said officers dispersed the crowds, and opposition leader Mir Hossein Mousavi was prevented from approaching the graveside of Neda Agha-Soltan, who has become a symbol of the protests against the country's election results.

Hundreds of police surrounded Mousavi and forced him to leave Behesht-e Zahra cemetery, they said.

Some of those gathered reportedly chanted Mousavi's name and "Death to the dictator."

The event was held in defiance of a government ban, and it was believed that the opposition may also try to stage rallies along major traffic circles and squares in the capital at the same time as the memorial.

Mousavi's Web site said the gathering would be held at the graveside of Agha-Soltan, shot to death during protests on June 20. Thursday is the end of the 40-day mourning period for the young woman, whose dying moments were caught on video that became one of the iconic images of the upheaval.

Authorities say some 20 protesters have been killed in the crackdown, although rights groups say the number is probably far higher. The opposition says Iranian authorities have pressured families of slain protesters not to mourn publicly out of fear the gatherings could spark the kind of demonstrations that followed the disputed vote.

Massive protests and deadly clashes erupted in the days and weeks after electoral authorities declared President Mahmoud Ahmadinejad the winner of last month's vote by a landslide. But Iran's powerful Revolutionary Guard and its allied Basij militia have adopted a zero-tolerance policy that has largely thwarted protests over the past month. Nevertheless, demonstrators have still turned out in the streets.

Mousavi and fellow pro-reform leader Mahdi Karroubi decided to hold the ceremony in Behesht-e Zahra - the large cemetery on Teheran's southern outskirts where some slain protesters have been buried - after authorities rejected their request to hold it at Teheran's main Mosalla mosque.

The two leaders sent a request Sunday to the Interior Ministry asking permission for the ceremony. They said the gathering would "be held without any speeches and will be limited to the reciting of the Koran and 'moments of silence' to mark the 40-day period since 10 people died, including Agha-Soltan, during the June 20 protests.

Interior Ministry official Mahmoud Abbaszadeh Meshkini was quoted by the state IRNA news agency as saying Wednesday the ministry had not issued "any permission for any gathering."

"So far, it's unprecedented that someone asks permission for a memorial service from the Interior Ministry," Meshkini said, adding sarcastically: "Unless the applicant has other particular political intentions."

The deaths of protesters during the 1979 Islamic Revolution fueled a 40-day cycle of mourning marches, and shootings of mourners, that contributed to the overthrow of the US-backed dictator, Shah Mohammad Reza Pahlavi.

The election unrest has given rise to rare criticism of Iran's leadership from the country's top clerics and even conservative supporters who have complained about prison abuses, including reports of deaths and the brutal beatings of protesters.

The government announced that first trials of detained opposition supporters will begin Saturday, with the prosecution of around 20 protesters. They also include some accused of sending images of the unrest to the media while top pro-reform politicians will be tried later for allegedly ordering riots.

The opposition has said detainees were tortured to extract false confessions for the courts.