The legislation also broadens existing US sanctions against the Islamic Revolutionary Guard Corps, or IRGC, beyond those simply leveled against the organization's Quds Force. 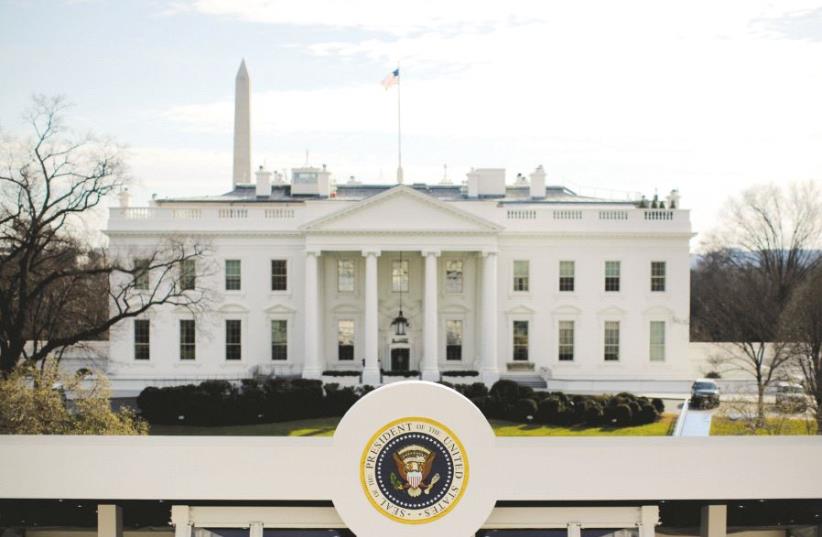 The White House
(photo credit: REUTERS)
Advertisement
WASHINGTON – The House of Representatives adopted a bill on Tuesday night that would sanction three of America’s most quarrelsome adversaries, moving the legislation within reach of the president’s desk.The Senate passed a similar version of the bill, titled the Countering America’s Adversaries Through Sanctions Act, earlier this month. Both chambers voted for the legislation targeting Iran, Russia and North Korea with overwhelming bipartisan support: In the House, 419 members voted for it, when just three voted against, while 97 out of 100 senators supported the measure.If signed by the president, the law would target individuals and entities involved in Iran’s ballistic missile program and in its government’s human rights abuses. The legislation also broadens existing US sanctions against the Islamic Revolutionary Guard Corps, beyond those leveled simply against the organization’s Quds Force, which is responsible for operations outside Iran.Both Russia and Iran responded angrily to the congressional move on Wednesday, warning of a “decisive response” should President Donald Trump grace the bill with his signature.“The Iranian parliament would, in the first step, adopt its own measures in response to the US sanctions,” said Iran’s president, Hassan Rouhani, according to the state-run Fars news agency. “And we will take any other step that we deem necessary in line with the interests of our country, and we would continue our path without paying attention to their sanctions and policies.”Trump has not expressed support for the legislation, which includes harsh new sanctions on Moscow for its “significant” cyber attack and influence campaign in the 2016 US presidential election. But the bill is likely to become law regardless of the president’s action, after Republican lawmakers agreed to build in language that strips Trump of his power to unilaterally relieve Russia sanctions.Massive GOP support during the initial Senate and House votes was an intentional message to the White House that this bill is “veto-proof,” according to Republican congressional aides.That means new sanctions targeting Iran are almost certain to become law – a development that Tehran’s deputy foreign minister, Abbas Araghchi, claimed on Wednesday would stymie implementation of the 2015 international deal governing its nuclear program.The new legislation amounts to a tired move from the US Congress and a “conclusion of previous US sanctions in nonnuclear fields,” Araghchi said, according to Fars.“As a result, the draft sanctions law is incompatible with different clauses of the JCPOA,” he added, using an acronym for the nuclear deal, “under which the US is committed to implementing the deal with goodwill and in a constructive atmosphere.”But US groups supportive of the nuclear accord worked with Senate and House leadership to ensure this new sanctions bill fully complies with the JCPOA – a condition of Democratic support, said Patrick Clawson, director for research and an Iran specialist at the Washington Institute for Near East Policy.“If you look at the text of the JCPOA, what the US said it was going to do was actually extremely limited and specific,” explained Clawson, who said the bill includes impactful new visa restrictions on individuals who have been part of the Revolutionary Guard Corps.“The Iranians would likely say that you cannot relabel the same sanctions as a missile sanction and take the same actions under a different guise,” said Stephen Rademaker, a former Bush administration official and nonproliferation expert now with the Podesta Group. “But the sponsors of the legislation would say it’s entirely consistent with the JCPOA – and as evidence of that, they would point to comments from senior Obama administration officials at the time, who said the US was only obligated to end its nuclear-related sanctions.”EU officials have criticized the bill in recent days, concerned in particular with language from the original Senate version that would hurt Europe’s energy sector. The “extraterritorial” reach of secondary US sanctions – those that target companies beyond America’s immediate jurisdiction – troubles the French government, but has proven to be Washington’s most effective sanctions tool in punishing adversaries.“Any new sanctions represent a threat to the viability of the nuclear deal, which was a significant accomplishment for EU diplomacy, as well as a threat to future business on Iran,” said Suzanne Maloney, a senior fellow at the Brookings Center for Middle East Policy. “They don’t want to see the deal eroded by American egotism, and they don’t want to see it jeopardized by a perception in Iran that its benefits have been insignificant.”Maloney said the JCPOA clearly allows the US to pass new sanctions against Iran on matters outside the nuclear file: “It was clear throughout the negotiations and in the text of the JCPOA that significant US restrictions on Iran’s economy would remain intact,” she said, “nor does the deal preclude the imposition of new measures on grounds unrelated to Iran’s nuclear program.”Iranian officials blame the US for poor execution of the nuclear accord, for slow foreign investment and bank reengagement, and for acting in “bad faith” through its preparation of new sanctions.But the Trump administration argues the nuclear deal was intended, in part, to provide Iran with a fresh start in the international community, in which it has operated as a rogue state since the Islamic Revolution in 1979.Iran has not seized that opportunity, according to the president’s aides.“It is up to the administration to decide who actually will be sanctioned – the bill is a framework, but the administration chooses which individuals and entities are designated on a case-by-case basis,” said Rademaker. “It’ll be very interesting to see how the Trump administration implements this.”