Former Iranian intelligence officer says Tehran ordered downing of plane over Lockerbie in retaliation for US attack on Iranian airliner.

By JPOST.COM STAFF
Iran's Ayatollah Khomeini may have given the order to down Pan Am flight 103.
(photo credit: REUTERS,Wikimedia Commons)
Advertisement 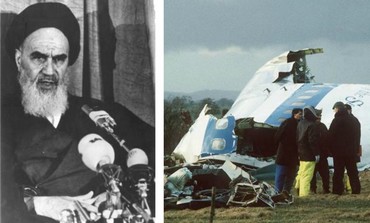 Did Ayatollah Khomeini (L) order the downing of the Pam Am flight 103? (Reuters, Wikimedia Commons)Who was responsible for the 1988 bombing of Pan Am flight 103 over Lockerbie, Scotland? While the Libyan government was thought to have masterminded the terrorist attack, a bombshell documentary by Al Jazeera quotes a former Iranian intelligence officer as saying Tehran that ordered the atrocity.British newspaper The Telegraph cites documents obtained by the Qatar-based pan-Arab satellite network that claim Iran recruited a Palestinian terrorist organization based in Syria to carry out the bombing that killed 270 people, including 11 on the ground.The paper quotes the former agent, Abolghassem Mesbahi, who defected to Germany from Iran, saying that flight 103 was downed in retaliation for a US Navy strike on an Iranian civilian airliner six months earlier that killed 290 passengers and crew.According to Mesbahi, Ayatollah Ruhollah Khomeini instructed Iranian operatives “to copy exactly what happened to the Iranian Airbus.”It was previously thought that Libya was responsible for the bombing. A former Libyan intelligence officer, Abdelbaset al-Megrahi, was convicted by a Scottish court for the bombing and sentenced to life in prison.The Gaddafi regime eventually paid $2.7 billion in compensation to victims’ families.Lawyers working on Megrahi’s appeal uncovered evidence that appears to support Mesbahi’s claims that Iran had given the order to carry out the bombing to the Popular Front for the Liberation of Palestine – General Command.While Iran vehemently denied involvement in the Lockerbie incident, it was considered a suspect since it was believed it was seeking to take revenge against the US for the downing of Iran Air flight 655, a civilian airline that the US Navy had mistaken for a fighter plane. American naval forces were protecting merchant shipping in the Persian Gulf during the Iran-Iraq War.