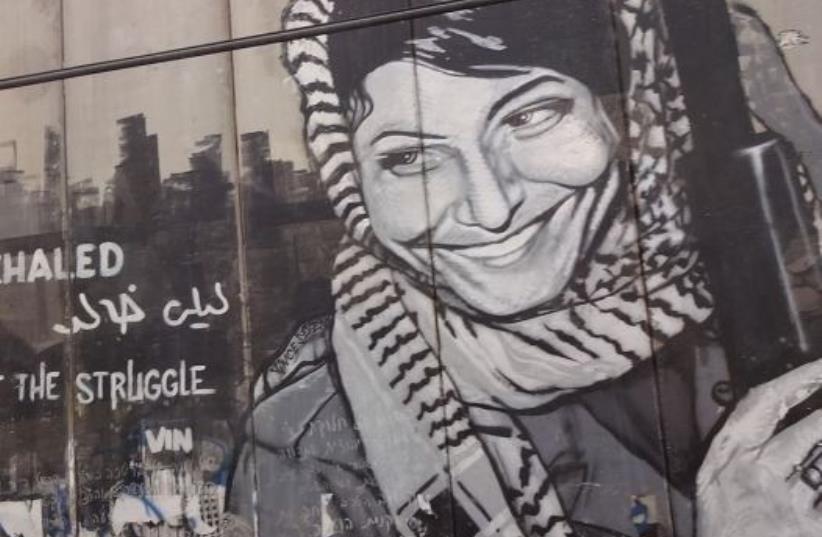 The two-day conference, Memorializing the Sabra & Shatila Massacre: Bearing Witness, Resilience, & Accountability, included speakers such as a founding member of the Popular Front for the Liberation of Palestine (PFLP), a scholar indicted in the US for involvement with Palestinian Islamic Jihad, two Palestinian-Lebanese "resistance fighters." The co-founder of a Canadian organization involved in a racism and Canadian government funding scandal also attended as a speaker.

A post shared by AMED Studies at SFSU (@amedstudies)

Salah Salah, described by SFSU AMED as "one of the founders of the Arab Nationalist Movement and the PFLP," spoke on a panel alongside his wife, Samira Salah. The PFLP is listed on the US State Department's Foreign Terrorist Organizations.

A graffiti image of PFLP terrorist Ghassan Kanafani on the security barrier in the West Bank (credit: WIKIMEDIA COMMONS/JUSTIN MCINTOSH)

The last panel of the event on September 11 was set to feature Dr. Sami Al-Arian and Leila Khaled. The latter was to attend by Zoom, but there were technical difficulties. Khaled was a convicted PFLP terrorist involved in the hijacking of airplanes and holding passengers hostage. She is held as a symbol of "resistance" by supporters of Palestinian armed movements.

The panel was moderated by SFSU AMED director Dr. Rabab Abdulhadi, who previously invited Khaled as a guest speaker in 2021. Controversy surrounded the SFSU event "Whose Narratives? What Free Speech for Palestine?" which was delayed when Zoom and social media platforms refused to allow their services to be used to host the panel featuring an unapologetic terrorist. Pro-Israel groups had launched a campaign against SFSU's hosting of Khaled.

Al-Arian, who spoke on the panel Khaled was supposed to attend, had also previously been hosted by SFSU AMED and Abdulhadi, exactly one year ago on a panel called "Whose Narrative? 20 Years since September 11, 2001." Al-Arian was indicted and struck a plea deal in 2003 over his alleged affiliation with Islamic Jihad, the terrorist organization that Israel recently fought with during the three-day Operation Breaking Dawn.

Al-Arian reportedly admitted to conspiracy to aid a relative with PIJ links to obtain immigration benefits, and in 2006, Al-Arian refused to testify on his ties to a charity suspected of terrorism financing. While he was deported to Turkey in 2015, supporters insisted that legal proceedings against him were politically motivated.

According to the AMED department, Palestinian-Lebanese guerilla fighters Kifah Afifi and Anwar Yassine also spoke at the conference. Afifi and Yassine alleged that they were tortured in captivity after being arrested for military operations against Israel and Southern Lebanese allies. AMED posted on Facebook that Yassine was a member of the Lebanese National Resistance Front, which is closely affiliated with the PFLP.

Another notable speaker listed by SFSU AMED was Dr. Gretchen King, co-founder of the Community Media Advocacy Centre, and according to a Louisiana obituary, partner of beleaguered Canadian anti-racism consultant Laith Marouf.

The formerly Canadian government-funded CMAC and Marouf were the subjects of a scandal when it had been discovered that Marouf had made antisemitic and xenophobic comments on Jews, Israelis, Americans, and French Canadians. The government's relationship with CMAC, which had received $133,800 Canadian dollars for programming from the government for anti-racism programming, was suspended when Marouf's comments had come to light.

The SFSU conference was part of a series of events that marked several anniversaries meaningful to Palestinian narratives and history, chiefly the Sabra & Shatila massacre. The massacre saw the revenge killing of hundreds of Palestinian civilians by an Israel-allied Maronite Christian militia. A commission concluded that then-defense minister Ariel Sharon bore indirect responsibility for the tragedy through negligence to prevent and foresee the war crimes.

A second conference will be held in Tunisia on September 19.