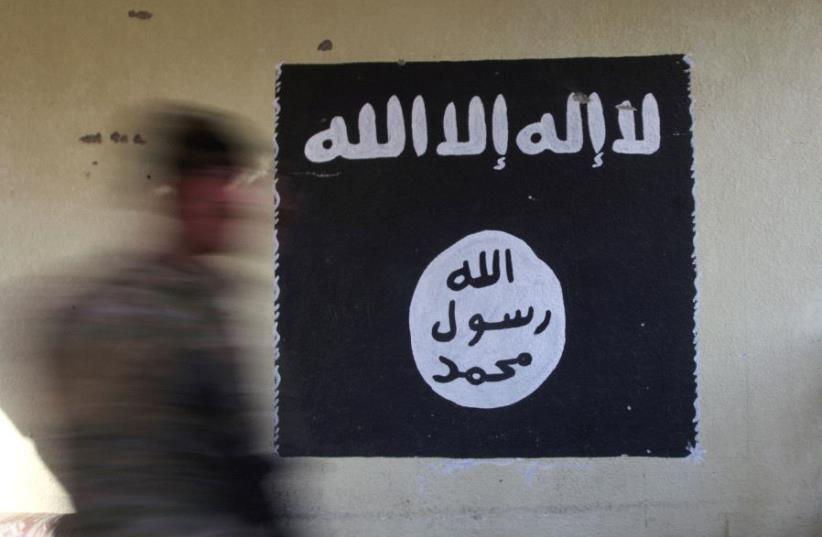 A member of the Iraqi rapid response forces walks past a wall painted with the black flag commonly used by Islamic State militants
(photo credit: REUTERS)
Advertisement
JOHANNESBURG - Britain has warned of a threat of attacks by Islamists on foreigners in South Africa after two British nationals were kidnapped in a small town there, but South African police said they had no evidence militants were behind the incident.Africa's most industrialized country has a large expatriate community and attracts many tourists, and has seldom been associated with Islamist militancy. No attack followed a similar warning by Britain and the United States in June 2016.South Africa's elite police unit Hawks said the force was investigating the kidnapping, which took place on Feb. 12.Britain's Foreign Office (FCO) said on its website the main threat was from Islamic State.In an email to Reuters on Thursday, the FCO said: "We have updated our travel advice to include this recent incident," referring to the kidnapping. "Our travel advice already states that terrorists are likely to try to carry out attacks in South Africa. This remains our assessment."The FCO declined to give details on the kidnapping.A spokesman for the Hawks, Lloyd Ramovha, said two suspects had been arrested in connection with the kidnapping of the British couple.Police have not identified the couple, who live in Cape Town. They were kidnapped in the small town of Vryheid in the eastern KwaZulu-Natal province, Ramovha said. Police were still investigating why they had traveled there."The couple are still missing at this stage. No ransom has been demanded. Our investigation so far has not revealed any links to terrorists, let alone ISIL," Ramovha said, using an acronym for Islamic State."Besides that, South Africa has measures to counter terrorist threats. We are more than ready to deal with such.""The car the couple was driving in was found yesterday (Wednesday), and is now undergoing forensic tests," he said.The couple, a 74-year-old man who moved from Britain to South Africa in the 1970s and his South African-born wife, 63, both have British and South African nationalities.Security officials and experts say there are no known Islamist militant groups operating in South Africa, where Muslims make up less than two percent of the population.The FCO said terrorists were likely to try to carry out attacks in shopping areas in major cities and said news reports suggest that a number of South African nationals had traveled to Syria, Iraq and Libya and were likely to pose a security threat on their return.Jasmine Opperman, director of Southern Africa Operations at the Terrorism, Research and Analysis Consortium think tank, said the British alert was "alarmist.""South Africa's vulnerability for attack is there, but are there solid indications of attacks now as we sit here? There are none," she said in an interview with eNCA television.