Cape Town’s ‘Day Zero’ has been moved to June 1.

People queue to collect water from a spring in the Newlands suburb as fears over the city's water crisis grow in Cape Town, South Africa
(photo credit: REUTERS/MIKE HUTCHINGS)
Advertisement
The countdown to “Day Zero” for Cape Town’s water crisis has been pushed from May 11 to June 1, but South Africa’s government has officially declared the impending catastrophe “a national disaster.” “Day Zero” is the day when water reservoirs across the city are expected to hit 13.5% of capacity and taps will be turned off.The Wandile Zulu Foundation, together with the South African Jewish Board Deputies, hosted a water crisis symposium last week, which saw several well-known experts in the field, including the director of Arava Institute’s Center for Transboundary Water Management, Dr. Clive Lipchin, address possible solutions to the situation.Based in Israel, the Arava Institute is an environmental studies and research program that focuses on a range of environmental concerns and challenges throughout the Middle East.Around 150 people attended the symposium, including members of Rand Water – a South African water utility that supplies potable water to the Gauteng province and other parts of the country, officials from the city of Johannesburg, water entrepreneurs and members of the Jewish community. 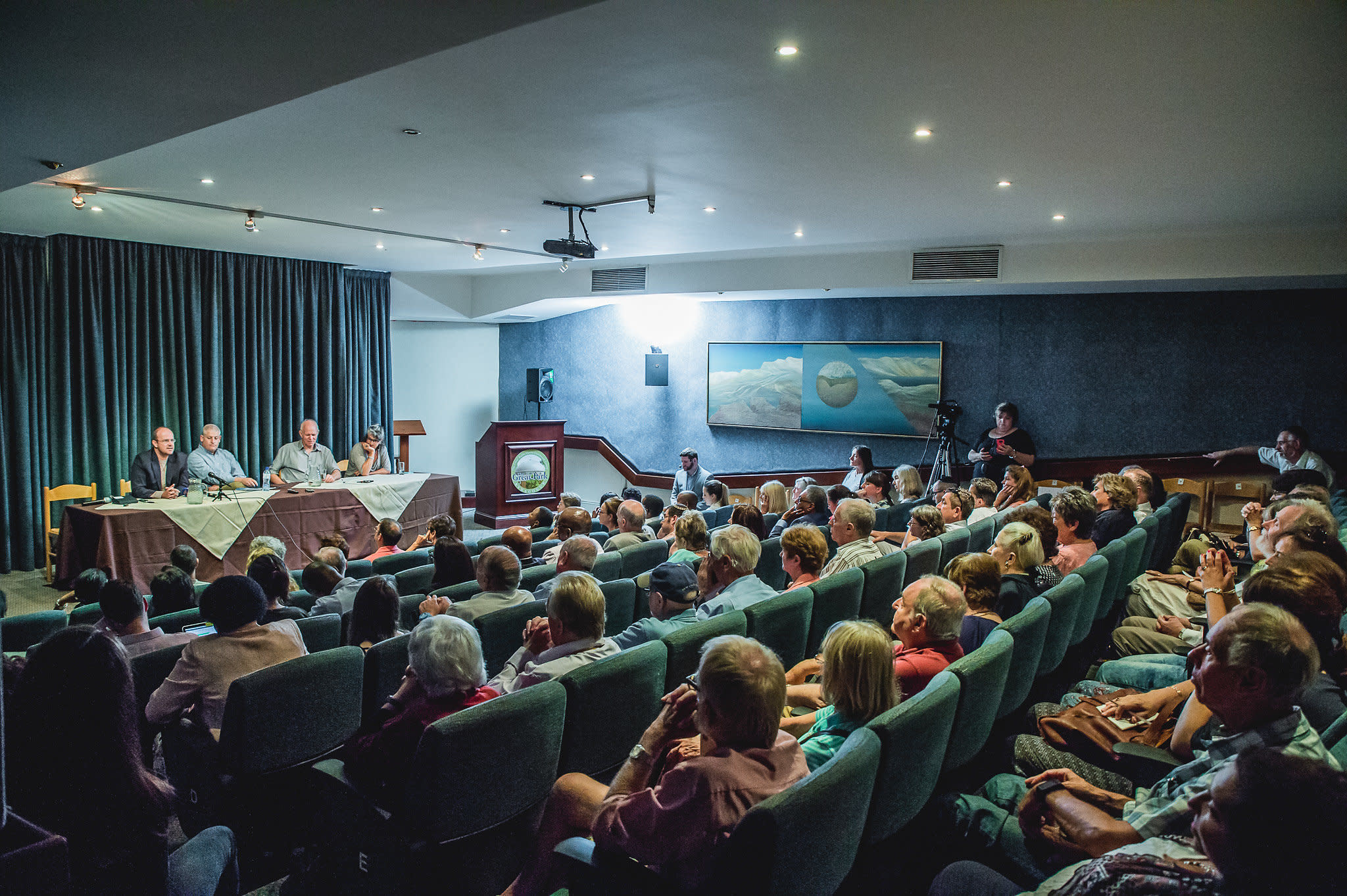 he audience listens closely to the panelists at the Water Symposium hosted by the Wandile Zulu Foundation and the South African Jewish Board of Deputies in Johannesburg. (ALON COHEN)During the event, Lipchin, who was born and raised in South Africa, explained that Cape Town is not the only city in the world facing a water crisis; Sao Paulo, Brazil and Brisbane, Australia, have also recently faced similar situations.Lipchin also spoke about the reasons behind water problems and the technology that can be used to address such issues – such as desalination and water recycling. “Water is an infinite source... The problem is that it doesn’t rain in the right place or at the right time,” he said. “In the mid-1990s, Israel was where Cape Town and many places are, we were in a very significant drought and all of our stocks – the Sea of Galilee, the Jordan River, groundwater aquifers – were all basically collapsing. This was a turning point for Israel.“You have to manage water as stock. You have to think about managing water as a flux, and you have to think about water as a commodity...“We want to see water as a basic human right, something that cannot be denied to people because water is life. But we must, however, also understand that water is not free, it costs a lot – not for the water, but managing water costs money, treating it, storing it, pumping water – all of that costs money.”Lipchin emphasized that without thinking of water in this way, “we cannot get to a point of figuring out all the solutions that are out there... We cannot rely solely on natural water.”He said that this is when desalination came into play in Israel, adding that there are other options. “You have to go beyond natural water supply. Seventy to 80% of Israel’s drinking water supply comes from the sea [and is desalinated] but that’s not enough. You have to value every single drop of water and put it into productive use.”Addressing the Cape Town crisis, Lipchin said he does not doubt that South Africa will be able to find a solution. “The way to think about water and the way to move from crisis to management, you have to think about this issue very comprehensively. Where Israel is today, Cape Town and South Africa will be tomorrow, because you will solve this problem – and the advantage here is that you do not have to start from zero,” he said. “It is happening all around the world. You can look at Israel, Australia, Spain, Singapore and Hong Kong – there are many good examples out there, and Israel is just one of them.”“It’s not a water scarcity crisis but a crisis of water management,” he added.Lipchin also explained that to some degree there are similarities of water inequality in the townships in South Africa and in some of the Palestinian villages. “There is a large inequality of water access, in water distribution... If I go to a township [in South Africa] or a Palestinian village, one of the problems there is that there is lack of infrastructure – there’s no drinking water network or sewage network. One solution is that they must be connected to the network but that may not always be feasible politically or financially,” he said. “There are many solutions, like on-site treatment of water, on-site or localized desalinization. For example, what we [the Arava Institute] are doing now in parts of the Jordan Valley with our Palestinian partners is using renewable solar energy. We have on-site solar desalination units to treat the water on-site and is giving the farmers high-quality water that is increasing their crop yields and improving their socioeconomic position as they have greater income coming out of their agriculture.”He concluded by saying, “What we need for South Africa... is [to figure out] how to provide sufficient, safe and affordable water to those who are on a network and those who are not on a network.”DR. ANTHONY TURTON, a professor of the Center for Environmental Management at the University of Free State said, “The water crisis in Cape Town has forced us to a point where we cannot go any further with our paradigm of scarcity.”Turton explained that South Africa doesn’t have a water problem but rather a “pollution problem, a salt problem, or a problem about water at the wrong time, the wrong place, too far, too dirty – that is the problem. So we must re-frame the problem, and we need this new paradigm of abundance.”“We must re-frame this problem... We must recover the water from waste, that is the first thing we have to do and we have to put time, energy and technology into that,” he said.He made it clear that salt needs to be removed where it’s relevant and said that the “conjunctive use of groundwater” should only be done during a crisis. “Groundwater is a viable resource if you understand the ‘animal’... You talk about the use of conjunctive groundwater like the overdraft in your bank... You’ve got to pay it back with interest and if you don’t, you’re going to lose the facility. In the good years we have to recharge [ground water] and put it back.”He added that with climate change, “it’s not so much that we’re getting less water but it’s that we are losing more to evaporation.”He made it clear that using the right technology, governance and policy programs could vastly change the situation in South Africa.Dr. Jeunesse Park, a visionary who pioneered greening, climate change action and Permaculture food security initiatives in South Africa, highlighted the role of being a citizen and how active citizens can be effective in saving water, like using metering, while well-known environmental scientist Simon Gear addressed how messages about water – understanding and saving it – need to be communicated.