Two suspects were detained Thursday morning as the police probe into the possible terror network behind the lethal attack at the Manchester arena continues. 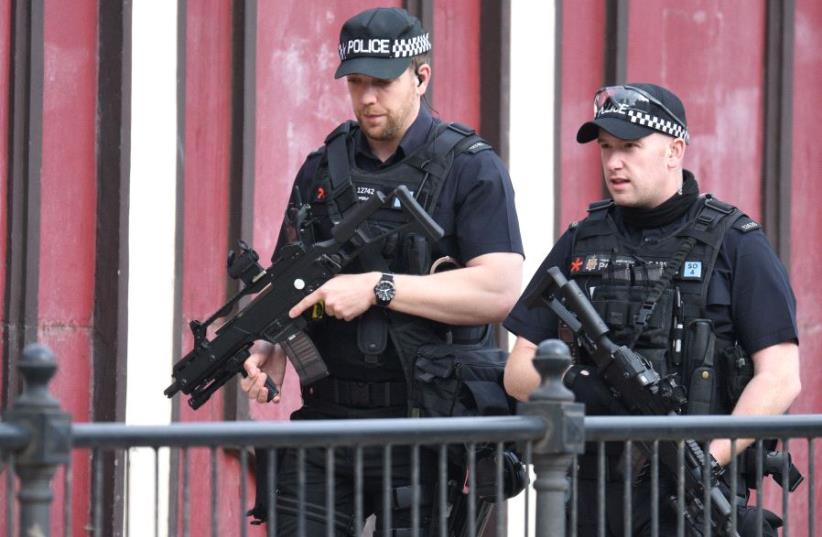 Armed police patrol near Manchester Arena following a deadly terror attack in Manchester, northwest England on May 23, 2017
(photo credit: OLI SCARFF / AFP)
Advertisement
Two men were arrested in Manchester Thursday morning in connection with Monday's lethal terror attack at the Ariana Grande concert which claimed the lives of at least 22 people and injured scores more.
UK police arrest fifth person in connection with Manchester attack (credit: REUTERS)
Manchester police has said, according to local media, that one of the men was arrested following a property search in the Withington area of Manchester, while another was detained elsewhere in the city. A third suspect, a local woman, was also arrested Wednesday overnight during an armed raid but was later released without charges. Manchester police detectives carried out the arrests after executing controlled explosions during ongoing searches in the early hours of Thursday morning. As the probe into the possible network continues, the father and brother of suicide bomber Salman Abedi were arrested in Libya. Abedi's father is alleged to be a former member of an Al-Qaeda-backed Libyan Islamic Fighter Group. On Wednesday night, Prime Minister Benjamin Netanyahu called the UK's Theresa May to extend his condolences to the families of the victims and express Israel's solidarity with Britain as it reels from the deadliest terror attack it has faced since the railway bombings of 2005 that took the lives of dozens in London.