FM Murray McCully stated that as a member of the UN security council, he will prioritize the renewal of peace negotiations between Israel and Palestine. 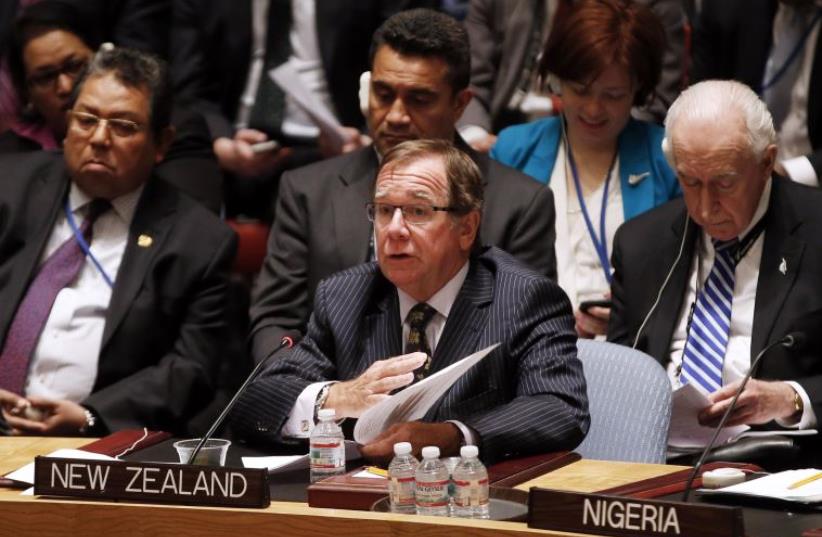 New Zealand's Foreign Minister Murray McCully addresses a meeting of the United Nations Security Council at U.N. headquarters in New York February 23, 2015.
(photo credit: MIKE SEGAR / REUTERS)
Advertisement
New Zealand Foreign Minister Murray McCully said in an interview with TV3 on Sunday that renewing peace talks between Israel and the Palestinians should be high on the list of priorities for the UN Security Council.In the interview, he discussed several key issues concerning the stalled peace talks, including land swaps and Israel's security. He referred to Israeli security as a "thorny issue", however reiterated that both parties are "not that far apart" when it comes to reaching a resolution.He stated that in order for progress to be made, both parties must first be in the same room. "The security council should play a role here, not to try and multi-lateralize a process that has to be between the two principles, but rather to give support as they engage," he told the New Zealand television station. New Zealand, a member of the UN Security Council, believes that now is the right time to reignite stalled peace talks, said McCully . His push for negotiations echoes statements made by French Foreign Minister Laurent Fabius, who met with Israeli and Palestinian leaders last week. Fabius agreed that resolving the conflict would only come through direct talks, but he stated that he believed there needed to be a third party in place to urge both parties in that direction. Prime Minister Benjamin Netanyahu has previously stated that he is skeptical of foreign-led peace initiatives, and said that attempts to impose peace terms on Israel "will fail because first of all Israel will resist it, and secondly because the Palestinians will never agree to negotiate if they think the international community will give them what they want without negotiations.”"Peace will only come from direct negotiations between the parties, without preconditions. It will not come from UN resolutions that are sought to be imposed from the outside," Netanyahu was quoted as saying.Netanyahu has made clear that Israel expects the Palestinians to “finally recognize Israel as the nation-state of the Jewish people,” and said it is “frankly inconceivable that while the Palestinians expect us to recognize a Palestinian nation-state, they refuse to accord us the same privilege.”In addition, he has said any final peace must be anchored in “ironclad security arrangements.” If not, he said, “such a peace will simply not survive and we will not agree to it.”Herb Keinon and Greer Fay Cashman contributed to this report.