NGO seeks to seize N. Korean ship to pay off $330 m. US judgment for killing of priest

Shurat Hadin wishes to seize ship which is impounded in Mexico in order to collect on judgment. 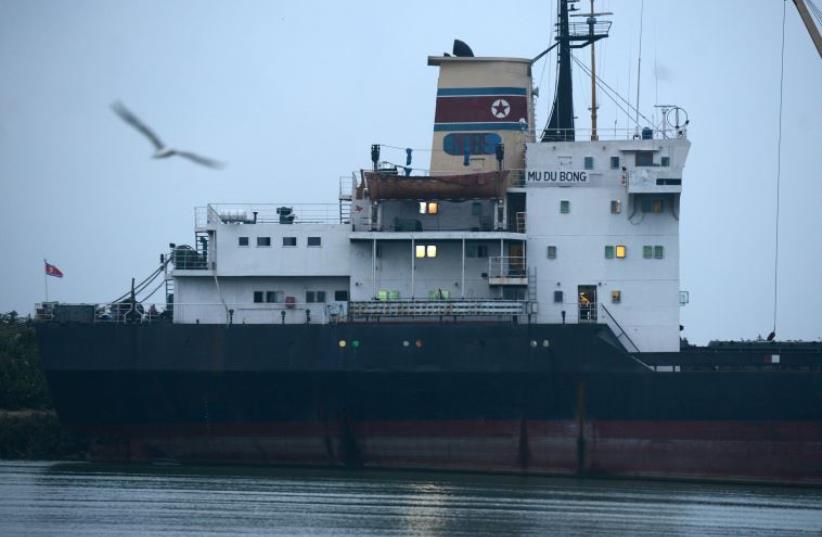 North Korean ship, Mu Du Bong,
(photo credit: REUTERS)
Advertisement
Shurat Hadin – Israel Law Center on Tuesday requested that Mexico permit it to seize an impounded North Korean ship to satisfy a $330 million it won against Pyongyang in April in a US civil damages trial for wrongful killing of a Christian priest.Mexico impounded the 6,700-ton Mu Du Bong for illegal weapons smuggling on its way from Cuba to North Korea following notification by UN sanctions monitors that the ship belonged to a blacklisted firm. The ship ended up accidentally landing on the Mexican coast and North Korea has protested Mexico’s continuing to hold on to the ship.The Tel Aviv-based NGO hired Mexican lawyer Alberto Mansur to request that Mexico honor and enforce the US court ruling as part of its obligations to honor foreign judgments under the Hague Convention.The April judgment, which also included findings by a US federal court in Washington that North Korea had kidnapped, tortured and killed South Korean-American Rev. Kim Dong Shik, included $15m. each to Shik’s son and brother as well as $300m. in punitive damages.Dong Shik, a South Korean who was a permanent resident of the US and had spent seven years providing aid and proselytizing to North Korean defectors who tried to escape via China, was abducted in China in 2000. In 2005, a South Korean court convicted an ethnic Korean of his abduction in concert with North Korean intelligence.Shurat Hadin said that it hoped that the context of the requested seizure, the North Korean outlaw regime ignoring weapons smuggling laws and flouting UN resolutions, would help its case since it tied into Pyongyang’s massive human rights violations in abducting and murdering innocent persons, which was at the heart of the Dong Shik judgment.The judgment was a default judgment in which the defendant, North Korea, did not even appear at trial, leading most to predict that it would go unenforced since default judgments are notoriously hard to collect on, especially with a regime such as North Korea, which has few connections to the West.After the April judgment, Shurat Hadin said the family was investigating all the possible avenues to collect the judgment against North Korean assets including seizing bank accounts, property and shares in foreign companies in the United States and abroad.But even Shurat Hadin admitted that Mexico’s seizure of the ship was a shocking gift and unexpected opportunity to collect on the judgment. The NGO’s President Nitsana Darshan- Leitner said that “North Korea should know that we are actively tracking its assets and looking to seize them everywhere in the world. This outlaw regime must be taught that it cannot abduct and murder foreign citizens and that eventually there will be a price to pay.”“There is no reason why this boat which clearly belongs to North Korea cannot be used to satisfy our judgment,” she said.In the April judgment against North Korea, the court said that the two $15m.and the $300m. damages awards were consistent with comparable cases against North Korea and Iran for other similar wrongful actions and recognized the tremendous suffering by Dong Shik’s family members.In December 2014, Shurat Hadin convinced a US federal appeals court to grant default judgment against North Korea on liability, paving the way for April’s massive damages award by the lower district court.The ruling by the US Appeals Court for the District of Columbia, written by Judge David S. Tatel, reversed an earlier district court ruling that had dismissed the case, despite North Korea failing to defend itself, on the grounds that the plaintiffs had failed to present any direct evidence of what happened to Dong Shik.The appeals court based its ruling on proof that Pyongyang kidnapped Dong Shik, a wealth of information about it torturing and killing prisoners, its systematic attempts to block direct evidence from emerging and its failure to counter the plaintiffs’ claims.The ruling was also significant because it allowed a case to go forward based on the “terrorism exception” to the US Foreign Sovereign Immunities Act, which somewhat broadens the paths and precedents open to suing foreign nations for terrorist acts.
Sign up for our Christian World newsletter >>