Competition was born out of $1 million former NY mayor Michael Bloomberg received as the organization’s first recipient of the prize, which was bestowed in Israel last May. 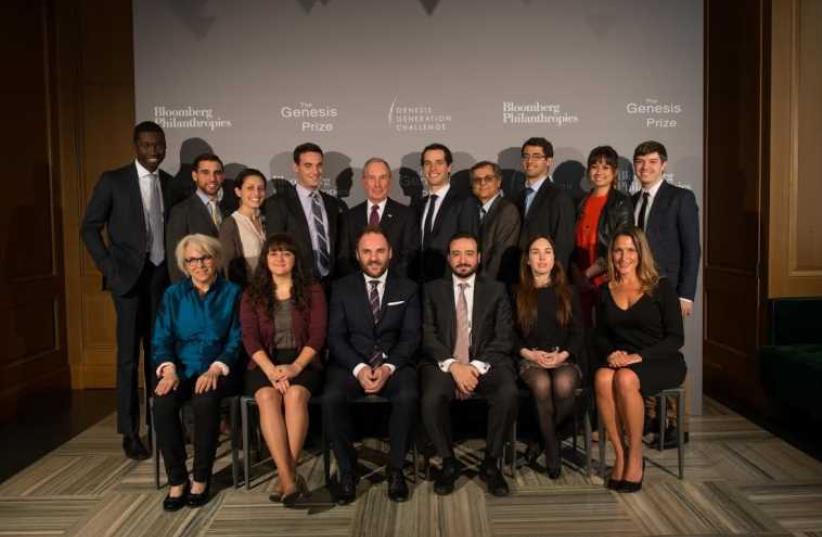 Winners of the 2015 Genesis Prize
(photo credit: Courtesy)
Advertisement
The Genesis Prize awarded nine burgeoning businesses $100,000 for their humanitarian efforts at a Bloomberg Philanthropies event in New York city on Tuesday.As winners of the Genesis Generation Challenge competition, the recipients were chosen for promoting projects that would “fuel ideas that would measurably better people’s lives,” the Genesis Prize Foundation said.The competition was born out of the $1 million former New York mayor Michael Bloomberg received as the organization’s first recipient of the prize, which was bestowed in Israel last May.Instead of pocketing the prize money, Bloomberg decided it was best to “pay it forward” and use the funds to promote innovative and humanitarian enterprises.“At a time when many Americans and Israelis fear the relationship between our countries has become irrevocably strained, we must recognize that the bond our citizens share is based on our common democratic values, like freedom, justice, innovation and community,” Bloomberg said of the reasoning behind rewarding the crop of aspiring do-gooders.Despite the headlines of US-Israeli tensions dominating today’s headlines, Jewish Agency chairman Natan Sharansky and Bloomberg urged that the focus should be on the commonalities between the allies and not their differences.“The United States and Israel should work together in this fight. We should be together in the goal to work for a better future, for tikun olam,” he said.Sharansky – who addressed the crowd via satellite – explained the foundation’s primary goal of channeling Jewish values to inspire goodwill worldwide and praised the competition for taking the first steps to make the foundation’s objectives a reality.“The idea of the Genesis Prize, from the very beginning, was to inspire young people to be proud of their connection to the Jewish people and the Jewish state, and to use this prize to make our world a better place. Today, we can see the first results of this initiative,” Sharansky said.Some examples of the young organizations selected include Build Israel and Palestine (BIP), which looks to enlist millennials who will dedicate their time and money to sewage water management initiatives in the Palestinian territories.Another company, Prize4Life, is a non-profit that hopes to crowd-source the development of an app that will monitor those diagnosed with ALS in the hopes that consistent and well-documented data on patients will help find a cure.eNABLE, which 3D prints prosthetics, has taken its efforts to the developing world in the hopes of providing prosthetic limbs to Haitians in need after the devastating earthquake in 2010.“The Genesis Prize, which celebrates individuals who inspire others through their dedication, is a unique opportunity for these nine young teams to expand their efforts in bettering the world around them,” said cofounder and Genesis Prize chairman Stan Polovets.Actor Michael Douglas, who also attended the ceremony, will receive the prize at a ceremony in June in Jerusalem.“These are big shoes to fill,” Douglas said, vowing to focus his attention as the foundation’s next prize recipient on a matter close to his heart – interfaith families within the Jewish community.