North Korea made the outrageous accusation that the CIA and South Korea collaborated in a plot to assassinate the North Korean leader through the help of a recruited local resident. 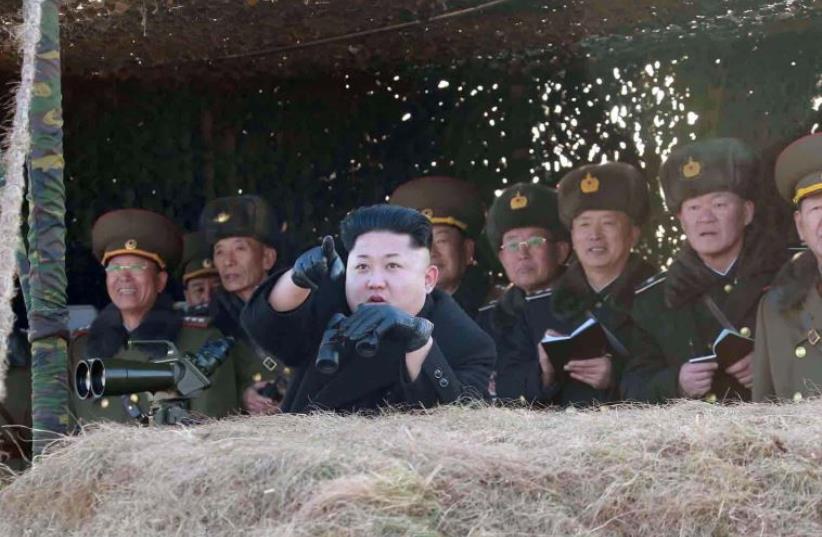 Kim Jong-un, North Korea leader
(photo credit: KNS / KCNA / AFP)
Advertisement
North Korea on Friday accused the US Central Intelligence Agency and South Korea's intelligence service of a plot to attack its "supreme leadership" with a bio-chemical weapon and said such a "pipe-dream" could never succeed. The accusation alleged that the US and South Korea had plotted to murder 'supreme leader' Kim Jong Un and others among the North Korean leadership with a bio-chemical weapon. The North Korean Ministry of State Security released an official statement in which it called both the US Central Intelligence Agency and South Korea's Intelligence Service a "hotbed of evils in the world." The statement went on to claim that the two agencies had a crafted a "hideous terrorists' group" that infiltrated the North and used a local resident (identified in the statement by the last name of Kim) to carry out the plot. Relayed by North Korea news agency KCNA, the statement also said that "they [the two agencies] hatched a plot of letting human scum Kim commit bomb terrorism targeting the supreme leadership" and claimed that the North Korean "collaborator" had been instructed to use biochemical substances to kill Kim Jong UN. Similar accusations emanating from North Korea came in Februray when North Korean agents were accused of using VX nerve gas to murder Kim Jong Un's estranged half-brother in a Malaysian airport
North Korea holds artillery drill as tension spikes (credit: REUTERS)
Tensions on the Korean peninsula have been high for weeks, with North Korea poised for a potential sixth nuclear test or a test-launch of another ballistic missile in defiance of UN Security Council resolutions.The US House of Representatives overwhelmingly approved to tighten sanctions on North Korea on Thursday.