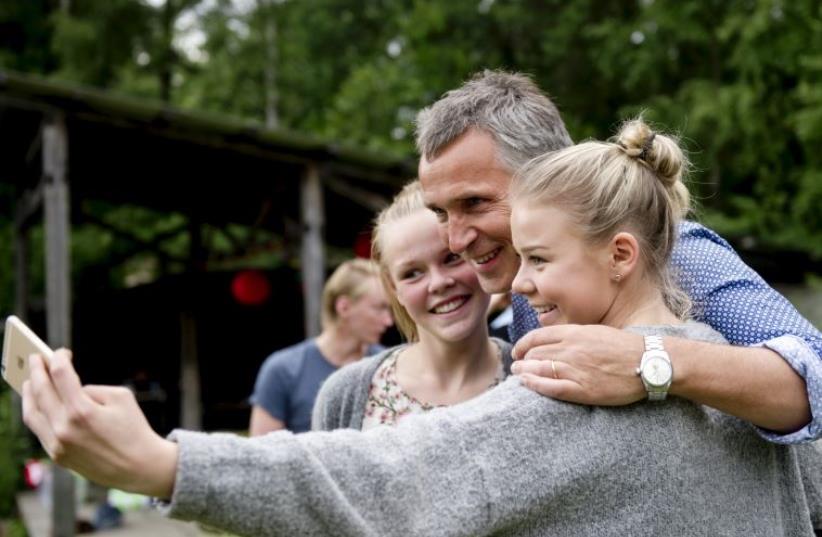 NATO Secretary-General Jens Stoltenberg (C) takes a "wefie" together with two girls during the Labor Youth Organization (AUF) summer camp at Utoya, Norway
(photo credit: REUTERS)
Advertisement
More than 1,000 young activists gathered on Friday on the Norwegian island of Utoya for the official opening of their political party's summer camp, the first meeting there since a right-wing gunman killed 69 people in a rampage four years ago."It's good to be home again at Utoya," the president of the center-left Labor Party youth organization, Mani Hussaini, told a crowd sitting on a hill.Some of the youths had crossed in the same ferry that took Anders Behring-Breivik, disguised as a policeman, to the island in July 2011 after he earlier had set off a car bomb outside the prime minister's office in the center of Oslo. The bomb killed eight people.The killings were the worst atrocity in Norway since World War Two, traumatizing a nation that prides itself on its reputation for peace and safety."All the things we had to go through and all the tough days. But this day will also be a part of Utoya's history," the Syrian-born Hussaini said from the stage to loud applause.Small signs dot the island with names of victims engraved on steel plates fixed to trees.Messages such as "Step by step we take our island back" and "We take good care of the memories" are written on notes and hang from a tree near the island's disused main building."To have the summer camp here again with all the tents reminds me a lot of walking here together with the friends who are not here anymore," said Runar Kjellstad Nygaard, 23.Four years ago, Nygaard went home to Oslo just before the shooting."It was actually the plan to stay and sleep here, but then I dropped it because they warned of bad weather," he explained."I'm very happy for that today, but it is a very strange feeling to sit at home and get text messages from your best friend saying 'things are happening out here'".Bulletholes could still be seen in a nearby pump house, situated between rocks where small hearts made of stone and steel have been attached. Fourteen people were killed there, while others survived by swimming from the island.A circle of steel, symbolising eternity, engraved with the name and age of almost all the victims, has been erected on the island as a memorial.At his trial, Breivik said he was trying to protect Norway from Muslim immigration and multiculturalism. He called the teenage activists on Utoya traitors to the Norwegian nation.In 2012, Breivik was sentenced in 2012 to the maximum time in prison of 21 years when judges declared him sane enough to answer for the murder of 77 people.