McCain: Congress vote against Syria strike would be catastrophic, says "we have a long way to go" before reaching agreement with president.

By MICHAEL WILNER, JERUSALEM POST CORRESPONDENT
Republican Senators McCain and Graham 370
(photo credit: REUTERS)
Advertisement
WASHINGTON – US President Barack Obama met with members of the Senate leadership on Monday at the White House, as the question of whether the United States should attack Syria moved to Capitol Hill.After surprising Congress with the decision to seek authorization for the use of force in order to punish Syria’s nominal president, Bashar Assad, for using chemical weapons against his own people on August 21, Obama administration officials scrambled to court votes from lawmakers voicing deep skepticism over military intervention. 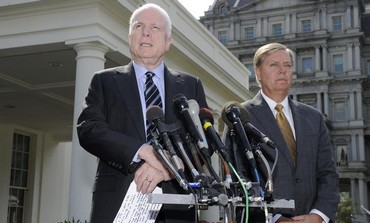 Republican Senators McCain and Graham following White House meeting with Obama on Syria, Sept. 2 Photo: REUTERS
Following a classified briefing, members of Congress from both parties said the administration’s case for Assad’s culpability was thin, that the scope of the operation was undefined and that the specter of the Iraq War cast a dark shadow over the prospect of intervention.However, the chairmen of the committees on Foreign Relations, Intelligence and Armed Services, as well as the Senate majority leader, have all expressed support over the weekend, indicating that the upper house would ultimately vote in favor of authorization.Obama met with several key lawmakers on Monday, including his former political rival, Sen. John McCain (R-Arizona), who has been a leading congressional voice on Syria for several months.McCain said on Monday that a vote by the US Congress against Obama's proposal for using military force in Syria would be catastrophic.Crisis in Syria - full JPost.com coverage"If the Congress were to reject a resolution like this after the president of the United States has already committed to action, the consequences would be catastrophic," McCain told reporters after meeting with the president at the White House. McCain said he was encouraged by the meeting but that there was "a long way to go" to get the resolution passed.McCain said that he and Republican Senator Lindsey Graham - who was also in the meeting with Obama - favored changes in the resolution that would broaden it to make it more than just a response to the use of chemical weapons by the Assad government."We do want an articulation of a goal that over time will degrade Bashar Assad's capabilities, increase and upgrade the capabilities of the Free Syrian Army and the Free Syrian Government so they can increase the momentum on the battlefield," McCain said.Both McCain and Graham have long favored US intervention against Assad in the civil war in Syria, while Democrat Obama has tried to stay out of the conflict until now."We appreciate the president meeting with us. We had a candid exchange of views and I think we have found some areas that we can work together. But we have a long way to go," McCain said.Secretary of State John Kerry, Chairman of the Joint Chiefs of Staff Gen. Martin Dempsey and Defense Secretary Chuck Hagel will testify before the Senate on Tuesday at an emergency hearing on the Syrian crisis, where they will reinforce the case that the use of chemical weapons in this century cannot go unpunished.The House of Representatives will hold its own hearing on Wednesday. Senior administration officials, in addition to Kerry, spent over an hour on the phone with House Democrats on Monday in an attempt to secure their votes.The president leaves Tuesday night for Sweden and will travel from there to Saint Petersburg, Russia, where he will face pushback from his host, President Vladimir Putin, for considering a strike.Russia’s foreign minister said Monday that his government was not convinced by American evidence that Assad’s forces were culpable in the August 21 chemical attack in the suburbs of Damascus.Members of the Russian parliament are considering a trip to Washington in order to lobby their American counterparts against a strike.“I think if we manage to establish a dialogue with our partners in the US Congress...we could possibly better understand each other, and we hope that the US Congress will occupy a balanced position in the end and, without strong arguments in place... will not support the proposal on use of force in Syria,” Russian Speaker of the Upper House Valentina Matviyenko said.Nevertheless, warship movements continued Monday throughout the political deliberations. Russia’s Interfax news agency reported that the Kremlin had sent a spy ship to the Mediterranean, joining two battleships that were sent last week to counter an allied military buildup of eight warships near Syria’s coast.The US on Sunday night also ordered an aircraft carrier, the USS Nimitz, to reroute to the Red Sea, though its orders were not characterized as part of a buildup toward a Syrian campaign.In Paris, senior members of France’s ruling party rebuffed growing calls from the opposition for a parliamentary vote on whether to take military action, after the legislatures in Britain and the US were given the chance to weigh in on their country’s involvement.French President Francois Hollande is the army’s commander- in-chief under the French constitution, and is empowered to order an intervention.His sole obligation is to inform parliament within three days of the start of action.In an interview with a French newspaper, Assad warned Paris against acting in concert with the US.“Anybody who contributes to the financial and military reinforcement of terrorists is the enemy of the Syrian people. If the policies of the French state are hostile to the Syrian people, the state will be their enemy,” Assad said.“There will be repercussions, negative ones obviously, on French interests.”Meeting in Cairo, the Arab League passed a resolution by Saudi Arabia urging the United Nations and the international community to “take the deterrent and necessary measures against the culprits of this crime that the Syrian regime bears responsibility for.”Blaming Assad for the attack, Saudi Foreign Minister Saud al-Faisal pushed the Arab League for the toughest language possible that would underline its support for an American strike.“Any opposition to any international action would only encourage Damascus to move forward with committing its crimes and using all weapons of mass destruction,” Faisal said.“The time has come to call on the world community to bear its responsibility and take the deterrent measure that puts a halt to the tragedy.”Lebanon, Iraq and Algeria declined to support the resolution.Reuters contributed to this report.