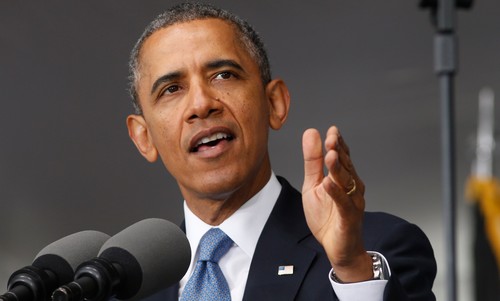 WASHINGTON – New American power is now in the ability of its leaders to uphold international law and order, US President Barack Obama said on Wednesday, in a significant foreign policy address to graduating cadets at the United States Military Academy.Under rain clouds in West Point, New York, the president made a broad case for multilateralism – for the reinforcement of global institutions and alliances such as the United Nations and NATO, and the norms they attempt to enforce.The blurring of borders in Ukraine, the proliferation of heinous weapons in Iran and the use of such weapons in Syria are examples of where the US has worked to enforce international norms with its partners in the world community, Obama said.“There are a lot of folks, a lot of skeptics, who often downplay the effectiveness of multilateral action,” Obama said. “For them, working through international institutions like the UN or respecting international law is a sign of weakness. I think they’re wrong.”

“This is American leadership,” he continued. “This is American strength.”Calling such organizations a “force multiplier,” Obama said the strength of these bodies reduced the need for unilateral American action and increased restraint among possibly aggressive foreign actors.“I believe in American exceptionalism with every fiber of my being,” the president said. “But what makes us exceptional is not our ability to flout international norms and the rule of law; it’s our willingness to affirm them through our actions.”Through this prism, Obama justified his policy on Iran: an international diplomatic effort that has “kept the world on our side,” he said, as negotiations continue in Vienna over the Islamic Republic’s expansive nuclear program.The five permanent members of the UN Security Council and Germany hope to reach an agreement that will ease their concerns about Iran’s nuclear work, which they suspect has military dimensions. Iran is a signatory of the UN Nuclear Non-Proliferation Treaty.“The odds of success are still long, and we reserve all options to prevent Iran from obtaining a nuclear weapon,” he said. “But for the first time in a decade, we have a very real chance of achieving a breakthrough agreement.”To Obama, policy on the nuclearization of Iran fits into a larger context of American engagement. Not only do nuclear materials in the hands of intransigent parties, or those that cannot control them, pose a direct danger to American cities, he said, but their proliferation threatens global order and the stability that such order grants the US.The White House called the speech the first in a series of public efforts to define the president’s foreign policy for the remainder of his term. Obama plans on discussing points of the speech further in his travels through Europe next week.Regarding Syria, the president announced new aid to neighboring Jordan, Lebanon, Turkey and Iraq, which are facing spillover from the civil war between Syrian President Bashar Assad and the rebels fighting for his ouster.Obama also said his administration would continue aid to moderate opposition forces, though he did not outline specific policy initiatives in the speech.Previewing the address, US Secretary of State John Kerry told CBS News on Wednesday morning that extremist rebels were plotting attacks against targets in Europe and the United States.“In the days ahead, we will be working very closely with Congress to engage in additional assistance to the moderate opposition,” Kerry said.Obama’s speech completely omitted the conflict between Israel and the Palestinians, after nine months of negotiations brokered by Kerry ended with no progress.But Middle East peace is still a top priority for the president, one senior administration official told The Jerusalem Post.“This was a speech focused primarily on security issues,” the official said. “The fact that the president wasn’t able to mention every single issue the United States is involved with doesn’t mean that the issue isn’t important.”Eight months ago, Obama referred to the Middle East peace process as one of his two greatest foreign policy priorities going into his final three years as president.“In the near term, America’s diplomatic efforts will focus on two particular issues: Iran’s pursuit of nuclear weapons, and the Arab-Israeli conflict,” Obama told the United Nations General Assembly in 2013.“Real breakthroughs on these two issues – Iran’s nuclear program, and Israeli-Palestinian peace – would have a profound and positive impact on the entire Middle East and North Africa,” he said.The president did, however, include mention on Wednesday of Israel’s peace treaty with Egypt, citing it as yet another example of the importance of global peace initiatives.“We continue to believe a lasting peace is in the interest of the United States, Israel and the Palestinians,” the official continued.“The door is open if the parties demonstrate a willingness to come back and address the difficult issues.”
Advertisement
Subscribe for our daily newsletter