“The blood of Polish Jews cries from the ground, and no law will silence it. The Government of Poland cancelled my visit, because I mentioned the crimes of its people. I am honored.” 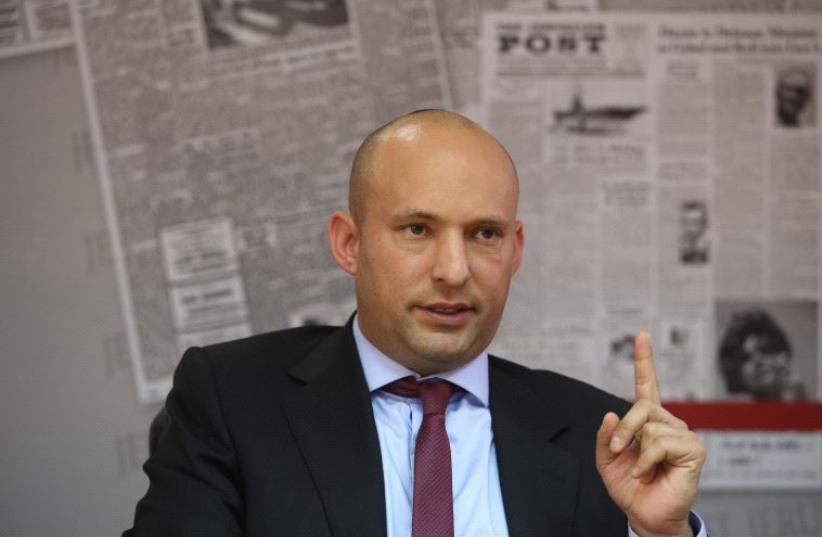 Naftali Bennett
(photo credit: MARC ISRAEL SELLEM)
Advertisement
The Polish government has cancelled a scheduled visit by Education Minister Naftali Bennett after he made remarks accusing the Polish people of complicity in the murder of Jews during the Holocaust.“There will be no such visit,” Polish government spokeswoman Joanna Kopcinska told a local Polish TV news channel on Monday evening.
Israel urges Poland to change bill regarding its role in Nazi Holocaust, January 28, 2018 (Reuters)
In response to the cancellation, Bennett released a statement, saying: “The blood of Polish Jews cries from the ground, and no law will silence it. The government of Poland canceled my visit because I mentioned the crimes of its people. I am honored.“Now, the next generation has an important lesson about the Holocaust of our people, and I will ensure that they learn it,” he said, adding that the decision by the Polish government “has a role to play in Holocaust education, even if they intended it to achieve something else.”Bennett said that even though the death camps in Poland were built and operated by the Germans, many Polish people “chased, informed or actively took part in the murder of over 200,000 Jews during and after the Holocaust.”He added that only a few thousand people, Righteous Among the Nations, risked themselves to save Jews.

“This is the truth. I accepted an invitation to a dialogue based on truth. The Polish government chose to avoid this truth. No legislation will change the past,” he said. “As education minister for the state of the Jewish people I will stand tall, for I cannot forgive or relinquish the honor of those murdered.”This rift is the latest in a diplomatic crisis between the two countries over the controversial bill passed by the Polish legislature last week that would make it a criminal offense to suggest that Poland was complicit in the Holocaust.The Polish bill would impose up to three years of jail time for using the term “Polish death camps,” when describing such death machines as Auschwitz and Treblinka, or for implying complicity of the Polish nation in the Nazi murder of millions of Jews and other minorities during WWII.EARLIER ON MONDAY, Bennett announced his plans to visit Poland on Wednesday to meet with Polish students and with Deputy Premier and Science and Higher Education Minister Jarosław Gowin in an official state visit to relay Israel’s opposition to the legislation.“I am determined to clearly say that history has already confirmed that the Polish people had a proven involvement in the murder of Jews during the Holocaust,” Bennett said on Monday. “I am going to speak truth, where the truth took place and it is not dependent on any law.”Bennett said that he believes the “dispute” with the Polish government should be resolved through “discourse and dialogue” rather than over an exchange of statements in the media.As such, he said he would meet with young students and with the leadership of the state to deliver a clear message: “The past cannot be rewritten, but we can write the future together.”Meanwhile, Polish Prime Minister Mateusz Morawiecki told Channel 2 in an interview Monday that “at this juncture changes in the law cannot be made,” and that it has already passed the Senate and is now in the hands of Polish President Andrzej Duda.He said that the “real intention” of the legislation is “not to write history differently” or “cover it up,” but that the “opposite is the case.”Rather, he invited “our friends from Israel to really understand what has happened on Polish soil, because none of the Jewish families who were saved [in Poland] during World War II could have been saved without the help of Polish neighbors.”Morawiecki said that there are clearly misunderstandings about the bill, and that he takes the reactions from Israel “very seriously.”The bill does not ban discussing “individual crimes, or individual things that have happened,” but rather the responsibility of the Polish state, which he added was actually non-existent at the time because it was under Nazi occupation.He said that the Israeli Embassy was consulted about the legislation, but that “both parties have not understood each other as well as should be.”Polish media also reported on Monday that the head of the Polish Foreign Affairs Ministry Jacek Czaputowicz called Bennett’s statements “unnecessary and premature.”He said that the part of the speech which talks about the need for dialogue was acceptable as it coincided with his government’s position.However, in sharp contrast, he said that naming Poland and the Polish people as those who participated in the murder of Jews was “unnecessary and premature.”He said the two countries’ governments should talk first and try to work out a position on the issue.Czaputowicz also added that there is an election campaign in Israel and suggested Bennett’s statements should be seen in this light – not directed so much to Poland as to his electorate.As part of his scheduled visit, Bennett had also planned to see the Warsaw Uprising Museum, which commemorates the uprising of the Polish underground against the Nazis during WWII, as well as the memorial for Jewish suffering in the center of Warsaw’s old Jewish ghetto.The minister was also to meet with Holocaust survivors and Righteous Among the Nations.