The American Association of Jewish Lawyers and Jurists urged the US Attorney General to accept a request by Pollard to relocate to Israel, or alternatively, to ease his parole restrictions. 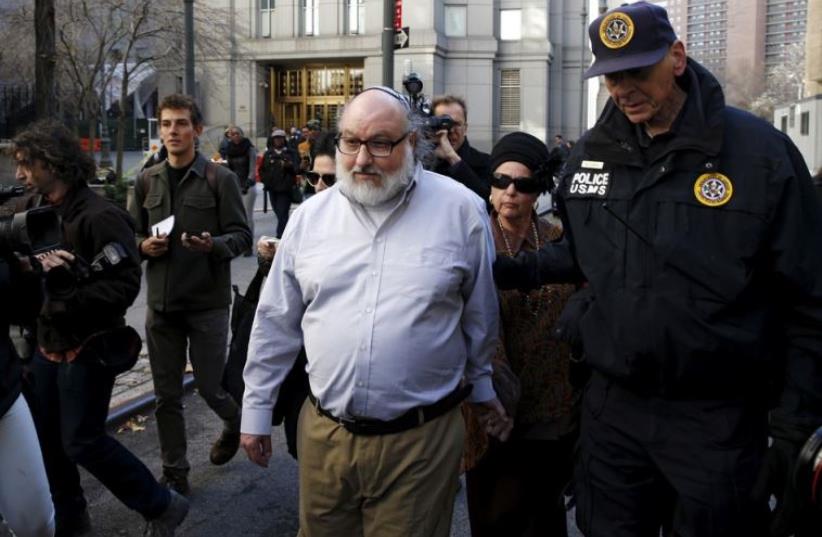 Israeli spy Jonathan Pollard leaves a federal courthouse in New York
(photo credit: REUTERS)
Advertisement
Former Israeli agent Jonathan Pollard’s attorneys will ask Judge Katherine Forrest of the US District Court in New York Monday to ease the conditions of his parole from prison.Pollard was allowed to leave his North Carolina cell on November 20 after serving 30 years of his life sentence for conspiracy to commit espionage without intent to harm the United States. He moved to New York City, where he is living with his wife, Esther.His parole conditions require him to wear an electronic ankle bracelet at all times for GPS tracking of his whereabouts and to be subjected to unfettered monitoring and inspection of his computers and those of his employer.Not only can he not move to Israel as he desires, he cannot leave his home before 7 a.m. or come home after 7 p.m.The parole conditions have put in limbo an offer Pollard received to become a research analyst in the finance department of a respected investment firm. Pollard, 61, suffers from chronic leg and ankle swelling, which makes the ankle bracelet problematic to his health. The bracelet also requires violating the Jewish Sabbath.The American Association of Jewish Lawyers and Jurists wrote US Attorney-General Loretta Lynch last week, urging the Department of Justice to accept a request by Pollard to relocate to Israel, or alternatively, to ease his parole restrictions by eliminating ankle or leg monitoring and home and employment computer surveillance. In its letter, the organization expressed concern that Pollard’s parole restrictions interfered with his ability to practice his religion, in violation of the Religious Freedom Restoration Act.“Mr. Pollard has expressed remorse for his actions, has been a model prisoner during the entire term of his incarceration, and is now aging and in deteriorating health,” AAJLJ president Alyza Lewin wrote. “There is no reasonable probability that Mr. Pollard will commit any future crimes. The interests of our country and the interests of justice would best be served if the Department of Justice were promptly to consent to any request by Mr. Pollard to unite with his wife and move to Israel.”Sources close to the Pollard case said there were no plans for him to meet in New York with Israeli leaders visiting the city, such as President Reuven Rivlin or Jerusalem Mayor Nir Barkat.When he was paroled, Rivlin released a statement saying that “throughout the years, our pain was Pollard’s pain.”Barkat tweeted a picture of Pollard and Esther along with the words “Waiting for you in Jerusalem.”