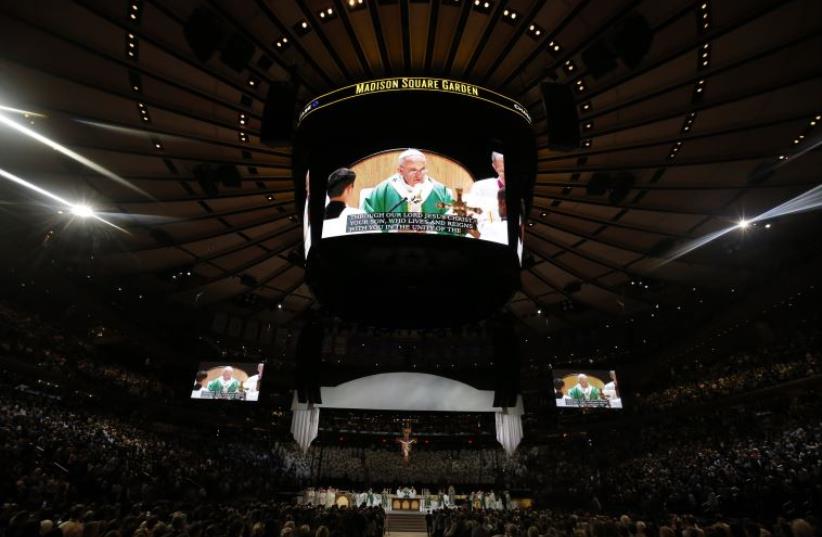 Pope Francis is shown on several large screens as he celebrates mass at Madison Square Garden in New York
(photo credit: REUTERS)
Advertisement
NEW YORK – Tens of thousands of people gathered in Manhattan’s Central Park to catch a glimpse of Pope Francis, whose motorcade made its way from 72nd Street down to Columbus Circle at the southwest corner of the park on Friday afternoon.Among the cheering crowd was Cynthia Martinez, 32. Martinez and her husband had won lottery tickets to attend the event.“You could just feel the excitement of the people around you,” she told The Jerusalem Post after the parade, “Everyone’s energy was just so exciting. I had butterflies in my stomach.“When we saw him, he just had that look of joy, so genuine and happy, which made you just wanna smile, too,” Martinez added.Martinez grew up an observant Catholic, but now considers herself a “spiritual Catholic.”“This is why I appreciate this pope, because he is about coming in and doing what a pope is supposed to do: be Christ-like, not judgmental, not so stuck on rules that the Church is so bounded to,” she explained.“This pope is the people’s pope.”Throughout his six-day US trip that ends on Sunday night, Francis has touched upon many socioeconomic and even security-related subjects, considered outside of the traditional realm of the papacy.In his address to the United Nations General Assembly on Friday morning, the pontiff spoke of the importance of respecting the environment as climate change occurs, the need to eradicate poverty and allow the poor to live in dignity, and called on countries to strive to achieve a nuclear weapon-free world.“An ethics and a law based on the threat of mutual destruction – and possibly the destruction of all mankind – are self-contradictory and an affront to the entire framework of the United Nations, which would end up as ‘nations united by fear and distrust,’” he said.“There is urgent need to work for a world free of nuclear weapons, in full application of the Non-Proliferation Treaty, in letter and spirit, with the goal of a complete prohibition of these weapons,” he added.He cited the nuclear deal secured with Iran in July and called it a “proof of the potential of political goodwill and of law, exercised with sincerity, patience and constancy.”Francis’s visit to New York City began with an evening prayer service at Saint Patrick’s Cathedral on Fifth Avenue on Thursday and ended with a mass at Madison Square Garden on Friday evening. It also included a stop at the National September 11 Memorial & Museum, at the former location of the Twin Towers.During the 40-hour visit, traffic in Manhattan was unprecedentedly bad. Dozens of streets were closed throughout the day. Authorities had encouraged all New Yorkers and visitors to rely on mass transportation, but train and subway riders also experienced some delays.Tens of thousands of NYPD officers were deployed around the sites where the pope made stops. Close to 8,000 security cameras were closely monitored.The NYPD, the FBI and the Secret Service collaborated on the mission. This was the biggest security challenge of its kind they have ever had to face as the pope’s visit came at a time where hundreds of world leaders are making their way to New York City to take part in the annual UN General Assembly debate, which begins on Monday.