By JPOST.COM STAFF, ASSOCIATED PRESS
APRIL 10, 2010 20:16
Kaczynski poland plane crash 311
(photo credit: Associated Press)
Advertisement
Polish President Lech Kaczynski and 96 of the country's highest military and civilian leaders died Saturday morning when the presidential plane crashed as it came in for a landing in thick fog in western Russia, officials said.Russian and Polish officials said there were no survivors on theSoviet-era Tupolev, which was taking the president, his wife and staffto events marking the 70th anniversary of the massacre of thousands ofPolish officers by Soviet secret police at the beginning of World WarII.Although initial signs pointed to an accident with no indication of foul play, the death of a Polish president and much of the Polish state and defense establishment in Russia en route to commemorating one of the saddest events in Poland's long, complicated history with Russia, was laden with tragic irony.Reflecting the grave sensibilities of the crash to relations between the two countries, Russian Prime Minister Vladimir Putin personally assumed charge of the investigation. He landed in Smolensk Saturday with an entourage of Russian officials to meet Polish Prime Minister Donald Tusk, who was flying in from Warsaw. The president's twin brother, former Prime Minister Jaroslaw Kacynski, also flew there in a chartered plane, according to his partyKaczynski was a good friend of the Jewish people
World leaders lament Polish president's passing 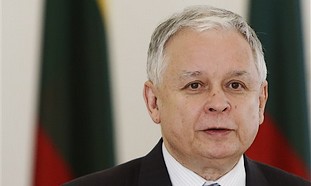 The crash devastated the upper echelons of Poland's political andmilitary establishments. On board were the army chief of staff, thenavy chief commander, and heads of the air and land forces. Also killedwere the national bank president, deputy foreign minister, armychaplain, head of the National Security Office, deputy parliamentspeaker, Olympic Committee head, civil rights commissioner and at leasttwo presidential aides and three lawmakers, the Polish foreign ministrysaid."We still cannot fully understand the scope of thistragedy and what it means for us in the future. Nothing like this hasever happened in Poland," Poland'sForeign Ministry spokesman Piotr Paszkowski said. "We can assume with greatcertainty that all persons on board have been killed."World leaders have been sending in their condolences to Prime Minister Donald Tusk.Prime Minister Binyamin Netanyahu sent a message of solidarity with the Polish people on behalf of the government and people of Israel, "I knew President Kaczynski as a Polish patriot, as a great friend of Israel and as a leader who was very active on behalf of his people and for advancing peace and prosperity in the world," Netanyahu wrote, adding, "President Kaczynski led an important process for opening a new page in relations between the Polish and Jewish people and developed Polish-Israeli relations.""During this painful hour we bow our heads, together with all of the citizens of Israel, over the huge loss to the Polish people and to all nations that seek freedom and peace," Netanyahu said.InWarsaw, Prime Minister Donald Tusk called an extraordinary meeting ofhis Cabinet. A week of mourning has been announced in Poland, Tusk calling the event the most tragic in Poland's non-war history.Tens of thousands of Poles have been thronging to the plaza in front of the presidential palace to lay flowers and lightcandles, the flags above it have been lowered to half-staff.Polish-Russian relations had been improving of late after being poisoned for decades over the Katyn massacre.Russia never has formally apologized for the murders of some 22,000 Polish officers, but Prime Minister Vladimir Putin's decision to attend a memorial ceremony earlier this week in the forest near Katyn was seen as a gesture of goodwill toward reconciliation. Rossiya-24 showed hundreds of people around the Katyn monument, many holding Polish flags, some weeping.

President Dmitry Medvedev sent his condolences and promised to work closely with Poland in investigating the crash."Russiashares the grief and mourning of Poland," Medvedev said in a statementposted on the Kremlin Web site. "Please accept the most sincerecondolences to the Polish people, words of compassion and support torelatives and friends of those who perished."Putin has been put in charge of a commission investigating the crash, the Kremlin said.
Advertisement
Subscribe for our daily newsletter