"With this agreement, we have the opportunity to stop Iran from ever getting a nuclear weapon, certainly for at least 25 years,” said Democratic Senator. 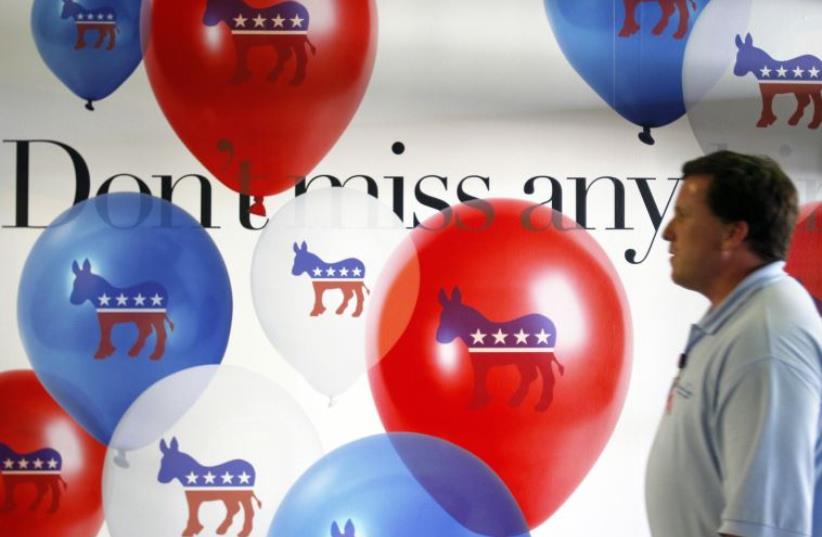 Democratic Party emblem.
(photo credit: JESSICA RINALDI / REUTERS)
Advertisement
NEW YORK – The Obama administration is inching closer to the congressional majorities it needs to ensure the survival of its signature nuclear deal reached with Iran last month.Sen. Harry Reid, Democrat of Nevada and the outgoing Senate minority leader, announced his support late on Sunday along with his intention to whip the votes of skeptical colleagues. One of those was Sen. Debbie Stabenow (D-Michigan), who announced her decision to support the deal on Monday.“For me, the decision comes down to this,” Stabenow said in a prepared statement.“Without this international agreement, Iran will have enough nuclear material for a weapon in three months. With this agreement, and the international coalition committed to it, we have the opportunity to stop Iran from ever getting a nuclear weapon, certainly for at least 25 years.”Stabenow became the 28th senator to announce plans to vote against a resolution of disapproval, slated to come before both chambers of Congress in mid-September. In order to prevent congress from overriding a presidential veto, President Barack Obama must secure the support of 34 senators or a third of the House of Representatives. The Democratic minority leader in the House, Nancy Pelosi of California, says she already has the votes necessary to sustain a veto should Obama be required to exercise that power.And yet, 98 members of the House haven’t publicly declared how they will vote — among them, Democratic whip Steny Hoyer of Maryland and Debbie Wasserman Schultz, Democrat of Florida, who also serves as chairwoman of the Democratic National Committee.Schultz, a prominent Jewish member of Congress, faces a tough crowd at home: Only 25 percent of Floridians support the agreement while two-thirds disapprove, according to a new Quinnipiac Poll released on Monday.The survey showed consistent disapproval of the historic nuclear accord, formally known as the Joint Comprehensive Plan of Action, in the states of Florida, Ohio and Pennsylvania — all key swing states in presidential elections. Each of those states has one Republican and one Democratic senator, and all three of the Democrats have declared their support for the accord.Meanwhile, Sen. Marco Rubio of Florida and Gov. John Kasich of Ohio, both in the running for the Republican presidential nomination, oppose the deal.