"He simply does not have the experience to be president" Christie said of Rubio. "We've watched it happen, everybody, for the last seven years," he added, referring to US President Barack Obama. 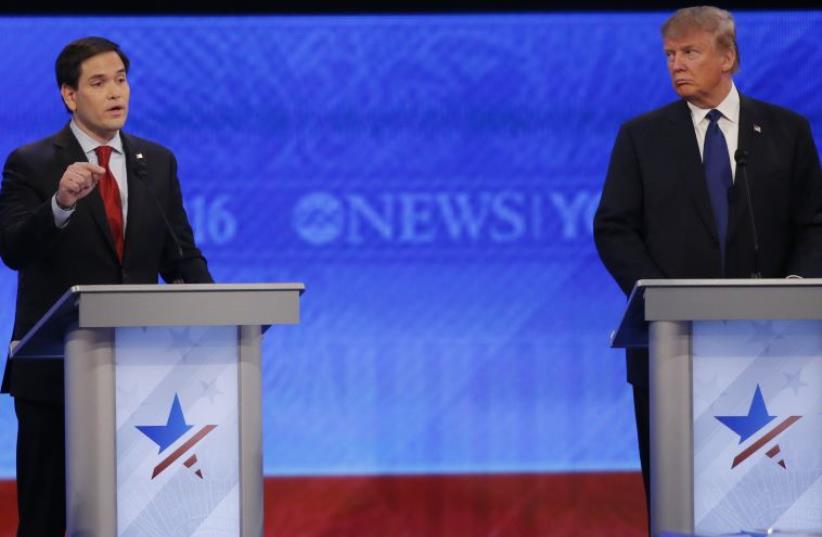 Republican U.S. presidential candidate U.S. Senator Marco Rubio speaks as businessman and rival candidate Donald Trump (R) listens during the Republican U.S. presidential candidates debate sponsored by ABC News at Saint Anselm College in Manchester, New Hampshire February 6, 2016
(photo credit: CARLO ALLEGRI/REUTERS)
Advertisement
MANCHESTER, N.H., - Republican presidential candidates Chris Christie and Jeb Bush went on the attack against rising rival Marco Rubio early in Saturday's presidential debate, accusing him of being too inexperienced for the White House.Christie and Bush, who are vying with Rubio for support from establishment Republicans in Tuesday's New Hampshire primary, compared Rubio's experience as a first-term US senator to President Barack Obama, who also was a first-term senator when he was elected."He simply does not have the experience to be president of the United States and make these decisions," Christie said of Rubio. "We've watched it happen, everybody, for the last seven years. The people of New Hampshire are smart, do not make the same mistake again."Rubio said he had shown in the Senate that he could get things done, but Christie accused Rubio of resorting to "a memorized 30-second speech.""We tried it the old way," Bush, the former Florida governor, said of electing Obama, saying the country got "soaring eloquence" but few results.Billionaire Donald Trump holds a solid lead in polls in New Hampshire, with Rubio, a US senator from Florida, rising quickly into second place after a surprisingly strong third-place showing, behind US Senator Ted Cruz and Trump, in Monday's first nominating contest in Iowa.The debate comes just three days before the New Hampshire primary, the second nominating contest in the state-by-state battle to pick candidates in the Nov. 8 presidential election.Cruz bypassed an early chance to tussle with Trump, refusing to repeat his criticism from earlier this week that the billionaire real estate mogul did not have the temperament for the White House.Trump noted that Cruz did not want to take him on."He didn't answer your question, and that's what's going to happen with our enemies and the people we compete against," Trump said. "We're going to win with Trump and people back down with Trump, and that's what I like."Trump and Rubio have become the favored targets of their rivals this week as the candidates launched an all-out offensive across New Hampshire.A Suffolk University/Boston Globe poll on Friday found Trump leading with 29 percent, followed by Rubio and Kasich.Not on stage was businesswoman Carly Fiorina, who failed to meet host ABC's qualification requirements. Fiorina released an open letter excoriating the debate process as "broken."