"I have made a point of preparing big decisions carefully. I will admit that I am angry at myself as this did not go as well as I would have liked, unfortunately." 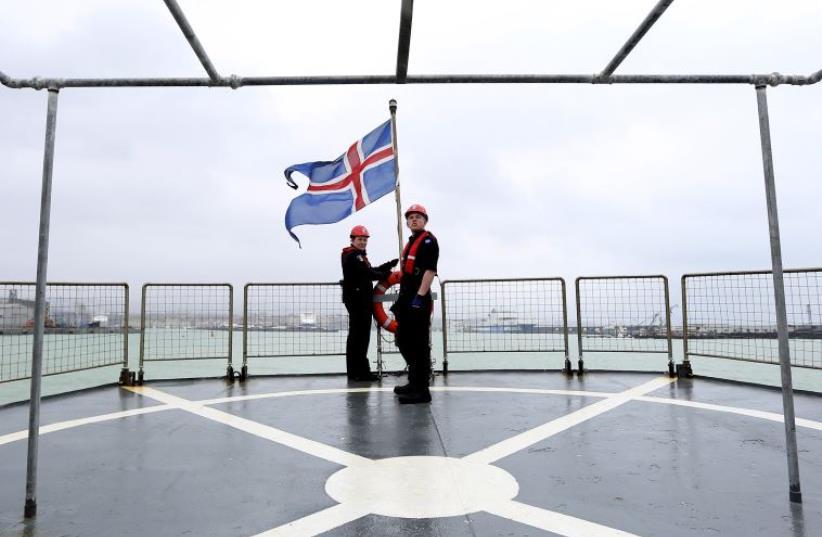 Icelandic coast guards hoist their national flag on the vessel Tyr as they sail from Catania harbour to off the eastern coast of Sicily March 17, 2015
(photo credit: REUTERS/ALESSANDRO BIANCHI)
Advertisement
The mayor of Reykjavík, the capital city of Iceland, said he will call for the city council to withdraw the controversial motion to boycott all products made in Israel, the Icelandic National Broadcasting Service reported on Friday. Mayor Dagur B. Eggertsson said in a statement that the motion was not prepared well enough, and that he was angry at the way the situation was handled. He says, instead, that he will suggest a motion to only boycott products made in the West Bank, and not the whole of Israel."I have said already that this was the idea behind the motion, but it should have been made much clearer in the text," Dagur said."I will suggest to the city council that the motion, as it is now, will be withdrawn while we have consultations on the next steps."Dagur also said that the motion was not prepared well enough before being presented. "I have made a point of preparing big decisions carefully. I will admit that I am angry at myself as this did not go as well as I would have liked, unfortunately."Dagur is expected to suggest the withdrawal of the motion at a city council meeting next week. The mayor also stated that the strong reactions to the motion surprised him."I accepted that there would be reactions, but not such strong ones. This is much more controversial, it seems to me, than when Iceland recognized Palestine independence,“ he says.On Thursday, two days after boycott vote, the European Jewish Congress considered legal redress, the group announced in a statement.“This is clearly a discriminatory move and we have already sought advice that it might break international law and treaties,” said EJC president Moshe Kantor in an email to the press.“Once again we see one nation, over all others, subjected to a ban and boycott, and we would like to ask those that sought this boycott if it is a mere coincidence that this nation also happens to be only Jewish nation in the world." The Simon Wiesenthal Center issued a warning to Jews around the world to avoid travel to Iceland.Icelandic prime minister Sigmundur Davíð Gunnlaugsson called the motion "absurd“ and said it would damage Icelandic business interests abroad. The wife of Iceland’s President Ólafur Ragnar Grimsson, Dorrit Moussaieff, is Israeli.She was born in Jerusalem, and lived there until 13, when she moved to Britain. She married Grimsson in 2003.Sam Sokol and Herb Keinon contributed to this report.