Mark Meechan was convicted in March for hate speech. 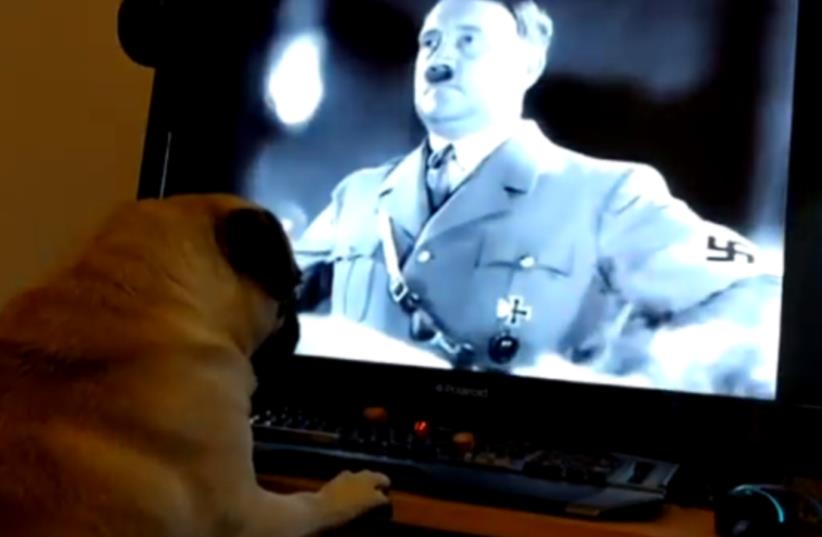 Scottish man teaches pug how to make Nazi salute
(photo credit: YOUTUBE SCREENSHOT)
Advertisement
Mark Meechan, the Scottish man who was convicted last month for hate speech for making a video of a pug giving the Nazi salute, was fined £800 (about NIS 4,000) on Monday morning by a Scottish court.Meechan, a comedian and social-media personality, was convicted in March by the Airdrie Sheriff Court of violating the Communications Act, by sharing a video that was “antisemitic and racist in nature.” In the video, Meechan appears to be trying to teach the wrinkly faced dog to raise its paw in response to certain phrases, including “Sieg Heil” (Hail victory - pronounced “zeek hahyl”) and “Gas the Jews.” Meechan has maintained that the video was intended as a joke, and he was simply trying to annoy his girlfriend, who owned the pug.In its sentencing statement, the court said “the video you posted, using a public communications network, was grossly offensive and contained menacing, antisemitic and racist material.“You deliberately chose the Holocaust as the theme of the video,” the court stated. “You purposely used the command “Gas the Jews” as the centerpiece of what you called the entire joke, surrounding the “Gas the Jews” centerpiece with Nazi imagery and the Seig Heil command so there could be no doubt what historical events you were referring to... You intended the video to be as offensive as you could make it and you posted it on your own unrestricted publicly accessible video channel.”The court said if all he wanted to do was annoy his girlfriend, Meechan had no need to film the dog, or to upload that film to YouTube.
Following the sentencing, Meechan wrote on Twitter about his experience outside the courthouse on Monday.
Scottish man teaches pug how to make Nazi salute
“Reporters swarmed me, wouldn’t let me pass,” he wrote. “One guy shoves a mic in my face and says ‘Why is it funny to gas the Jews?’ They must teach sneaky questions like that on journalism courses.”After the conviction in March, many public figures came to Meechan’s defense, and decried the policing of free speech.“A man has been convicted in a UK court of making a joke that was deemed ‘grossly offensive,’” Ricky Gervais wrote on Twitter after the conviction. “If you don’t believe in a person’s right to say things that you might find ‘grossly offensive,’ then you don’t believe in Freedom of Speech.”

Jewish comedian David Baddiel also had harsh words for the verdict and the policing of comedy.“An actual Nazi would not be teaching his *pug* to Hitler salute,’’ he wrote on Twitter. “Because in 1940s Germany, that would have got you arrested and murdered for taking the piss.”

I am that stupid, Karen. Because: an actual Nazi would not be teaching his *pug* to Hitler salute. Because in 1940s Germany, that would have got you arrested and murdered for taking the piss. https://t.co/FBSl84c8kK
— David Baddiel (@Baddiel) March 20, 2018


Others were more measured.Simon Wiesenthal Center’s associate dean, Rabbi Abraham Cooper, said after the conviction that he didn’t find the video amusing but also didn’t believe Meechan deserved jail time.“Speech may be free,” said Cooper, “but there are consequences for one’s actions... If I were the judge, I would sentence the young man to meet with aging Holocaust survivors and UK WWII war heroes to learn why the Nazi Seig should never be a laughing matter.”