The Kentucky senator said that while he supports the Iron Dome, he thinks “it should be paid for” • CUFI: “Senator Paul is treating the replenishment of this vital system as a political game.”

WASHINGTON – Republican Sen. Rand Paul from Kentucky delayed on Monday a vote to fast track a bill that would provide Israel $1 billion to replenish its stockpile of Iron Dome interceptors.

The delay came about ten days after the House of Representatives passed a suspension bill to provide Jerusalem with the funding. It is still not clear when the Senate will vote on the initiative.

In recent days, the American Israel Public Affairs Committee (AIPAC) and Christians United For Israel (CUFI) both pressed Paul to support the bill. On Thursday, he became the only senator refusing to “hotline” the bill even after it had been approved by the House.

“Hotlining” is when all 100 senators agree to allow a bill to go straight to the floor for a vote, substantially accelerating the approval process.

Paul is one of the most outspoken opponents of foreign aid, and for a period a few years ago proposed eliminating assistance to the Jewish state. A spokesperson for the Republican senator told Politico that he will drop his objection to the Iron Dome hotlining if the $1 billion comes from proposed assistance to Afghanistan.

The debate started when Sen. Bob Menendez (D-New Jersey) introduced the motion to fast track the bill and asked the Senate for unanimous consent.

“There is no conceivable reason why anyone in this chamber on either side of the aisle should stand in the way of US support for this lifesaving defense to be fully ready for the next attack,” said Menendez. “I strongly urge my colleagues on both sides of the aisle to join the House of Representatives in passing this funding on a broadly bipartisan effort.” 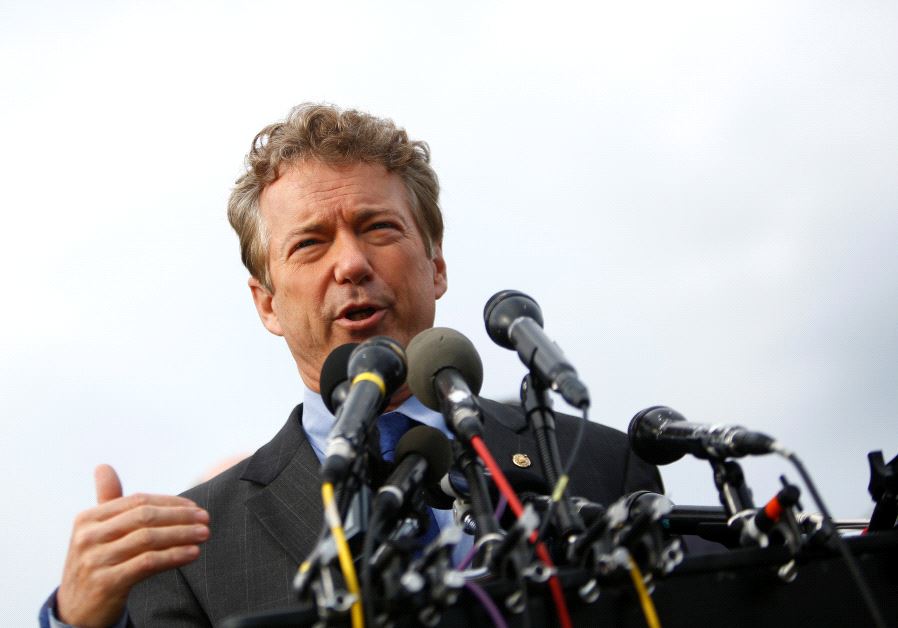 PAUL OBJECTED to the motion and said that while he supports the Iron Dome, he thinks “it should be paid for.”

“I think the American taxpayer dollars that pay for it should come from money that could go to the Taliban,” said Paul. He suggested taking the funds from some $6 billion that was designated for the Afghan government. “That money, I think, could be spent on the Taliban, if we do not rescind that money.

“The justification for my proposal for paying this is simple,” he continued. “Only an economically strong United States can be a militarily strong ally of Israel. I support Israel; I've voted for hundreds of millions of dollars to support Iron Dome.

Menendez rejected Paul’s amendment. “This amendment would slash refugee assistance being used at this very moment to evacuate and resettle US allies and partners who served alongside Americans in the war on terror," he said.

“The reality is that US dollars are not going to the Taliban, nor will they,” Menendez continued. “Let me be clear: No US foreign aid will go to a Taliban-controlled Afghan government. This does not mean that we remain any less committed to supporting the Afghan people – on the contrary. US humanitarian aid could be routed through highly vetted partners like the world food program, [which] we trust to put the interests of the Afghan people first. So let me be clear: Senator Paul's amendment would actually raid the funding that delivers life-saving humanitarian aid to the Afghan people, and they need it more than ever.”

Paul argued that “it is very clear – and very important that it be very clear – that I've offered to fully pay for the Iron Dome system with an extra billion dollars,” and that “the objection is coming from the Democrat side. They're objecting to it being paid for. We've offered this [cause a] fund of six billion [dollars].

IRON DOME interceptors destroy rockets launched from the Gaza Strip toward Israel in the skies over Ashkelon in May. (credit: AMIR COHEN/REUTERS)

“The billion dollars under consideration today is on top of the more than $1.6 billion the US has already given for Iron Dome,” Paul said. “And that's not all. The US provides Israel with just under $4 billion in aid annually. To date, the United States has provided over $146 billion in aid to Israel. In addition to Iron Dome, the US has helped Israel fund other missile defense systems as well. We spent 2 billion on David's Sling and 3.7 billion on Arrow programs,” he said.

“I know my colleague has not been particularly supportive of foreign aid in general and in this case in particular, but the reality is that we have an opportunity here,” Menendez replied. “I'm convinced that Iron Dome will get done. We will get the resources to our ally, the State of Israel, but it's a shame that we have to have the uncertainty that is pending as a result of the objection.”

CUFI condemned Paul after his vote. “Iron Dome is a matter of life and death for Israelis and Palestinians, and Senator Paul, true to form, is treating the replenishment of this vital system as a political game,” said CUFI founder and chairman Pastor John Hagee.

“Whatever concerns he has on other issues should be addressed in a manner that does not put innocent lives at risk,” Hagee said. “The legislation he is blocking advanced through the House of Representatives with overwhelming bipartisan support. Senator Paul needs to stop playing games with the safety of the Israeli people.”

"This is a very different scenario from when radical Democrats in the House opposed funding for the Iron Dome self-defense system because of their hostility to Israel," Republican Jewish Coalition executive director Matt Brooks said.

"Senator Paul, who is a friend of Israel, is objecting not because he doesn’t support the critical work of Iron Dome, but because he wants to see additional budget cuts to offset the cost," said Brooks. "We have communicated to Senator Paul that we recognize his concerns, but there should be no roadblocks put up to slow this critical funding for the life-saving Iron Dome system.”