Envoy to Vienna issued thousands of visas to Jews trapped in Austria during World War II. 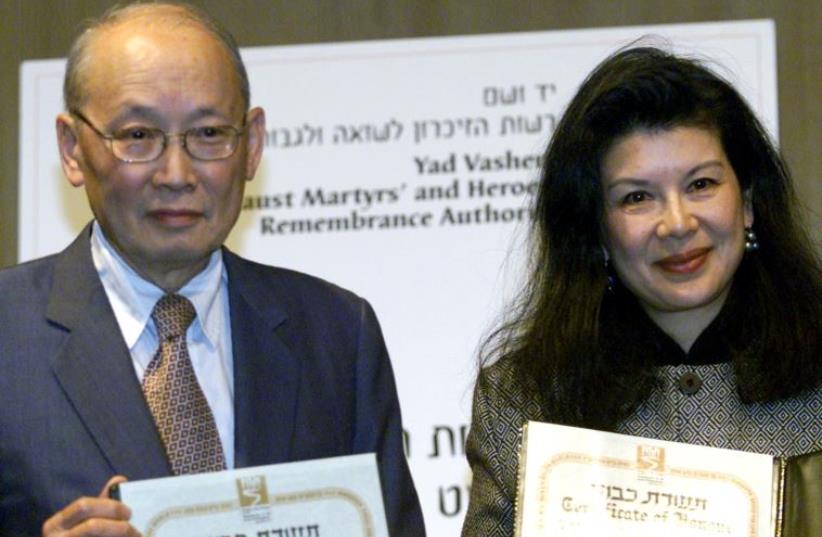 Monto and Manli, the son and daughter of the late Chinese Consul-General in Vienna during 1938-40, Ho Feng Shan, display their "Righteous Among The Nations" awards in the Yad Vashem Holocaust Memorial auditorium in Jerusalem
(photo credit: REUTERS)
Advertisement
TAIPEI – Daniel Weihs, who served as the Science and Technology Ministry’s chief scientist from 2010 to 2011 and currently heads the Technion’s robotics department, may have never lived if it were not for the efforts of a Chinese diplomat named Ho Feng- Shan.It was Ho, China’s consul- general to Vienna during the early years of World War II, who went against his superiors’ orders and issued Weihs’s parents a visa to Shanghai, allowing them to escape Austria. They settled in Kweilin, where Weihs was born, and moved to Israel in 1949.The Weihs were among thousands of Jews Ho rescued by issuing them visas to Shanghai, earning him the moniker “China’s Schindler.”On Thursday, Taiwan’s President Ma Ying-jeou, awarded a posthumous Presidential Citation to Ho, nearly 18 years after his death and 32 years after an apparently faux scandal cost Ho his diplomatic pension.“This is a long delayed citation for Ambassador Ho,” Ma said at a ceremony at the Presidential Palace, in the presence of Ho’s daughter Manli Ho and Weihs.Remarkably, Ho’s good deeds were not known during his lifetime. A story in his obituary, recalling a time he stood up to the Gestapo to defend a Jewish friend, sparked interest in the Jewish community, which led to research into his other actions during his time in Vienna.It turned out that over the course of two years, Ho issued thousands of visas to Jews who were trapped in Austria and could not escape without papers. The refusal of country after country to accept significant numbers of Jewish refugees – a decision codified at the Evian Conference in July 1938 – left European Jews scrambling to save their lives.China’s government, too, gave orders to limit the number of refugees, according to Yad Vashem, which honored Ho as a Righteous Among the Nations –non-Jews who took risks to save Jews in the Holocaust – in 2000.“Ho refused to abide by the instructions of his superior, the Chinese ambassador in Berlin, Chen Jie. Chen Jie, hoping to cement closer ties between China and Germany, had forbidden Ho to issue visas on such a large scale,” a Yad Vashem biography of Ho said.At Thursday’s ceremony, Ma recalled how Ho issued 20 visas to Eric Goldstaub and his family, who had been refused rescue by 50 other embassies. He recounted how Ho approved a visa application that a desperate soul had thrown into his car window, and even approved visas applications that had been given to him by desperate families on the train platform as he departed Vienna in 1940.Ho went on to serve as ambassador to Egypt, Mexico, Bolivia and Columbia, keeping his allegiance with China’s Nationalist government when it fled to Taiwan after Communists seized control of China in 1949.The end of his career, however, was marred by a minor scandal that cost him his pension after 40 years.“Once he had retired, the Chinese Nationalists in Taiwan launched a political vendetta to discredit Ho publicly with false allegations of a petty misappropriation of funds at his last posting. Ho presented evidence of his innocence, but it was futile,” the Center for Holocaust Studies at the University of Minnesota wrote.When his daughter accepted the citation on Thursday on Ho’s behalf, she said it was a step in clearing his name.“That is deeply meaningful to us his family, as we have spent years seeking justice for him,” she said.The decision to honor Ho comes as Taiwan and other countries mark 70 years since the end of World War II, and Jewish leaders hailed the decision to include a man whose distinction was saving Jews in the Holocaust.“This is something we attach a lot of importance to. The fact that the president decided to bestow this honor is extremely meaningful,” said Israel’s economic and cultural representative to Taiwan, Asher Yarden.“It’s particularly important in this country and this part of the world, which is less exposed to the Holocaust, what it means, its significant and so on,” he added.Irena Steinfeld, director of Righteous Among the Nations at Yad Vashem in Jerusalem, was also struck by the significance of a country with little connection to the Holocaust marking Ho’s contributions; Taiwan’s Jewish community numbers roughly 1,000. It was the fact that Ho had no significant connection the Jewish people that made his actions remarkable, she said.“He could have very well said, ‘Well, I’m a diplomat, I’ll do my job, and here’s a terrible suffering and I feel sorry for them, but it’s not my business.’ And yet he felt that it was his duty as a human being. And this is the connection. He saw the Jews as human beings, as people who were part of his universe of obligation, and decided to act,” said Steinfeld.But as with all things Taiwan, the award also made a statement about its relationship with China. Many Taiwanese continue to view the People’s Republic of China – the regime on the mainland – as illegitimate. Because Ho served under the Republic of China – the government that eventually fled to Taiwan – the award may be seen as an attempt to reinforce Taiwan’s historical position in China.Perhaps coincidentally, China Radio International on Thursday produced a video clip taking credit for rescuing thousands of Jews from the Holocaust. The clip was a response to a public service video the Consulate-General of Israel in Shanghai issued last month thanking China for providing a haven to endangered European Jews.The response clip featured Shanghai locals holding signs in Hebrew saying “You’re welcome,” “Don’t mention it” and “Happy to help.”Jerusalem Post staff contributed to this report.The writer was a guest of the Taiwanese government.