The law, which went into effect in 2015, required abortion providers to inform patients of the risks and wait at least 48 hours before proceeding. 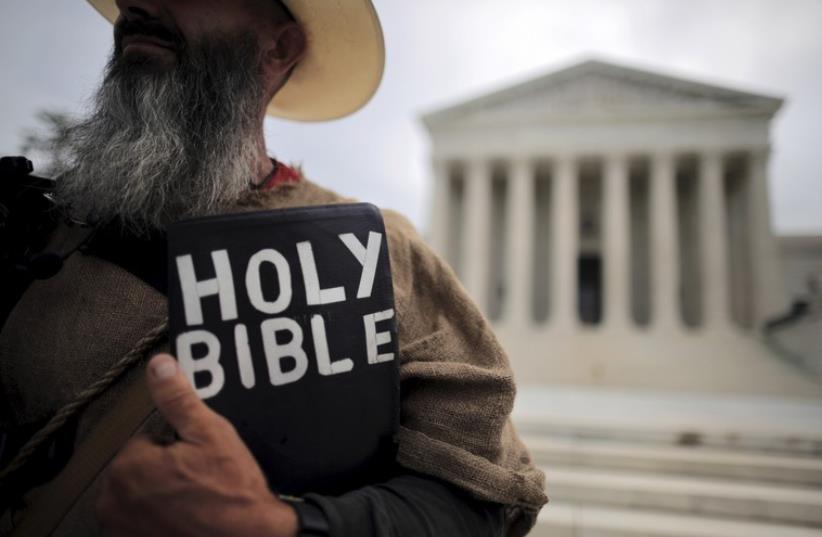 A protester holds a copy of the bible outside of the US Supreme Court building in Washington June 15, 2015. The US Supreme Court on Monday rejected a bid by the state of North Carolina to revive its law requiring women seeking an abortion to have an ultrasound of the fetus performed and described to
(photo credit: REUTERS)
Advertisement
Tennessee on Monday asked the US Supreme Court to reinstate a law that required a 48-hour waiting period for abortions, pending the state's appeal.The law, which went into effect in 2015, required abortion providers to inform patients of the risks and wait at least 48 hours before proceeding, "to ensure that a consent for an abortion is truly informed consent."In October last year, a district court judge struck down the law, ruling that the waiting period for abortions placed an unconstitutional burden on women.Tennessee then made a request with the Sixth Circuit appeals court to stay the lower court's order, which was denied, though the appeal was allowed to proceed.In its filing with the Supreme Court requesting a stay on the order, Tennessee said it had sought relief from the appeals court nearly six weeks ago, but the court has not ruled yet."Tennessee has now been unable to enforce its waiting period for over five months," it said."And although fourteen other states have similar waiting-period laws that generally require two trips to an abortion provider, Tennessee is the only state in the nation that cannot enforce its law because of a federal judicial decree," it added.Defending the law on the waiting period, the state added: "Some women will choose abortion without making an 'informed and deliberate' decision ... and some will later come to regret that irreversible decision."