Turkey singled out US White House Coordinator for the Middle East and North Africa Brett McGurk in the recent attack by Erdogan on the Biden administration.

Turkey opposes the US role in eastern Syria, where the US helped the local Syrian Democratic Forces defeat ISIS. Ankara’s ruling party, which has backed extremists in northern Syria and has ethnically cleansed Kurds, Christians and Yazidis, has frequently bashed the US in the past.

Brett McGurk, US coordinator for Middle East and North Africa, is almost like 'director of the PKK/YPG/PYD,' he walks arm in arm with terror groups: Erdogan

Turkey singled out US White House Coordinator for the Middle East and North Africa Brett McGurk in the recent attack by Erdogan on the Biden administration. Turkey’s Daily Sabah, a pro-government daily, said Erdogan was “speaking to reporters on his way back from Sochi, where he met with Russian President Vladimir Putin on Wednesday.”

“McGurk supports terrorism and has almost become the PKK/YPG/PYD’s manager,” Erdogan was quoted as saying.

“It deeply disturbs me that this man is arm in arm with terrorists in an area where I’m fighting them,” he reportedly said.

The comments were reported in leading Turkish media, indicating that the ruling party wants the comments to be known widely.

Turkey has slammed McGurk and Biden in the past. During the US election campaign in 2020, Ankara and its media, which is almost all linked to the ruling party, often slammed Biden and was openly pro-Trump.

Turkey’s ruler, Erdogan, had close relations with Trump and often tried to use the media to get favors from the US, such as trying to portray the SDF as linked to “Antifa” during riots in the US.

In 2018, Turkey accused the US of training terrorists in eastern Syria. When Ankara uses the term “terrorists,” it frequently refers to Kurdish political groups on the far Left. There is no evidence of any “terrorism” by these groups in Syria. 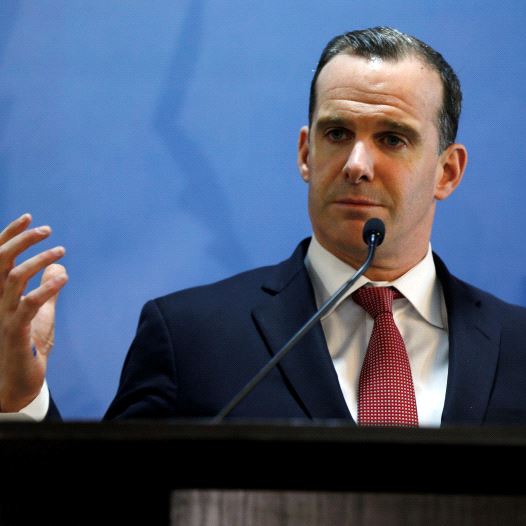 The US views HTS, a group linked to al-Qaeda that has worked with Turkey in Idlib province, as being a terrorist group similar to ISIS.

The US has also sanctioned Ahrar al-Sharqiya, a Turkey-backed extremist group, for abuses in October 2019 when Turkey invaded and occupied part of northern Syria.

This means that both Turkey and the US appear to accuse each other of backing terrorists. The main difference is that groups such as Ahrar al-Sharqiya and HTS have engaged in terrorizing activities against civilians, crushing dissent and murdering and harassing minorities and women. The US-backed SDF has not engaged in documented terrorist attacks in eastern Syria.

Turkey claims the SDF is linked to the PKK, which both Turkey and the US view as a terrorist group. Turkey has invaded part of northern Iraq to fight what it claims is the PKK. Turkey has also launched numerous airstrikes on Yazidi minorities in Sinjar in Iraq, claiming it is fighting terrorism.

In one case, Ankara bombed a medical facility. It is unclear why Ankara’s claims to fight “terrorism” often coincide with bombing minorities in Iraq and Syria and carrying out attacks against Christian, Kurdish and Yazidi minorities.

The recent comments attacking McGurk, a key member of the Biden administration’s Middle East team, is designed to create a divide with Washington and to showcase Ankara’s close relations with Moscow. Ankara appears to be ditching any pretense it might work with the US now in Syria, using the usual bullying and hate rhetoric that underpins how Ankara treats the US. Ankara doesn’t use such language with Iran, Russia or other authoritarian regimes it prefers.

Under Erdogan, Turkey has drifted toward increased authoritarianism, suppressing minorities, women, LGBT-rights activists and the media. This also manifests itself in support for Hamas and anti-Israel and anti-US comments.

It is unclear if the US will respond to the incitement against McGurk and the US administration by Turkey, which claims to be a “NATO ally” of the United States.