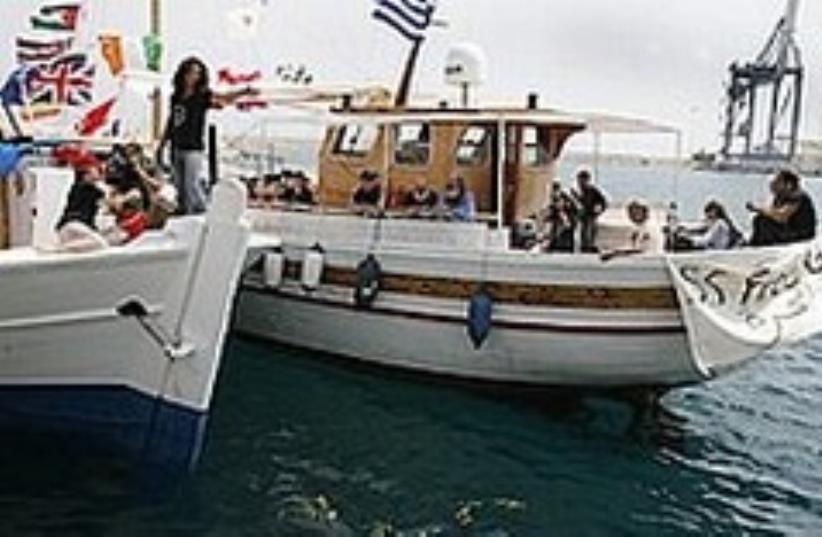 A report in a newspaper for Britain's Afro-Caribbean community that accused Israel of persecuting Africans and discriminating against anyone non-Jewish has been called inaccurate by the article's main source.

An article in this week's The Voice newspaper, published in London, catalogues the experience of British filmmaker Ishmahil Blagrove, a member of the Free Gaza group that attempted to enter Gaza by sea last month.

The group was stopped en route after its ship entered the waters off Gaza.

Blagrove said many of the quotes attributed to him were inaccurate, and he disavowed comments made in his name by the article's author, Janelle Oswald.

"I am disturbed that many of the statements attributed to myself in the article are factually incorrect," he said in the talkback section of the online article.

Headlined "My hell in an Israeli jail: Brit filmmaker 'abducted' by military, reveals shocking conditions inside Jewish state's prisons," the article accused Israel of persecuting thousands of Africans, saying its "racist" government discriminates against all non-Jews.

"Israel operates under a right-wing, racist government that discriminates against anyone that is non-Jewish," Blagrove wrote. "...Africans, like Palestinians, are being persecuted by the Israeli government and the world needs to know."

The article then used a Nazi analogy to describe Ramle prison where Blagrove was held.

"Without insulting the memory of those that have survived the Nazi concentration camps, the prison we were kept in can only be described in that manner. But most astonishingly, the prison was full of black Africans. I was absolutely dumbfounded."

In his response, Blagrove said: "I am concerned that many statements in quotation marks were attributed to myself. I have and will always continue to push for accuracy and truth in journalism."

Another report on Free Gaza's Web site said Blagrove spent his time in the prison helping detainees by establishing links with refugee groups in the United Kingdom.

"In Ramle prison, he has been working tirelessly to get contact with refugee councils and organizations in Britain to present to them the case of the refugees inside," Free Gaza wrote.

The Voice article also maintained that Blagrove witnessed the arrest of 800 Africans from Tel Aviv in two days, and that 90 percent of the country's prison inmates were black.

"The first day I was there, I witnessed 500 Africans scooped from the streets of Tel Aviv thrown into prison. The next day 300 more Africans were taken in and the prison population continues to grow daily, with Africans falling victim to the Israeli judiciary system," Blagrove was quoted as saying.

"There were Africans from the Ivory Coast, Ghana, Eritrea and so on. The prison population in Israel is 90% black, which is why I was so welcomed by fellow inmates. There are thousands upon thousands of Africans inside the Israeli prisons," he supposedly added.

Blagrove denied making any such statements, and accused Oswald of using erroneous information.

Blagrove said he did not witness 500 Africans taken off Tel Aviv streets and that it would be ridiculous to suggest that Israel's prison population was 90% black.

The article also quoted Blagrove saying that Israeli authorities confiscated and destroyed all of the group's equipment, including medical aid and toys.

However, he corrected the writer, saying: "Most of our confiscated equipment was returned, the British consul is attempting to secure the remainder of our equipment, including the boat. The medical aid and toys were not destroyed, the Israeli government promised to deliver the aid by road after security checks."

The majority of Africans in Israel are asylum-seekers, and many are economic migrants. Blagrove said in the article that Israel was refusing to send them back to their home countries.

"I was told atrocious stories. Real harrowing tales and countless inmates that have been transferred from one prison to the other informed me that every prison is the same and the government is refusing to send them back to their own country," he said.

Another entry in the talkback section from a worker at an Israeli human rights group said the article was "factually inaccurate and sensationalist."

"I was disappointed to read such a factually inaccurate and sensationalist article in your paper. Firstly, it is unfortunate that two separate issues, both complicated and deserving of a proper analysis, were lumped together," wrote Lisa Richlen, from the Hotline for Migrant Workers.

Addressing the inaccuracies, she added: "Israel would love to deport Sudanese and Eritreans back to their own countries, but, unlike the UK, which I know for a fact has deported Darfuris, Israel does not do this. If I were from those countries, I would not want to be deported and our clients don't want to. In fact, they prefer Israeli prisons to sleeping in public parks in Cairo."

Speaking to The Jerusalem Post, Voice editor Steve Pope said he regretted the inaccuracies in the article, and put them down to human error and miscommunication between Blagrove and Oswald. He promised to remove the article from the newspaper's Web site.

"I do regret that there were some factual errors in the story, but I don't accept that they fundamentally changed the gist of the story, which was one person's experience of being held in a prison in Israel and the large numbers of Africans that are being detained in the prison where he spent several days."

"The Voice has no axe to grind against any country or group and the story of the treatment of African migrants is the same in many countries across Europe," he added.

Pope said he had asked the Israeli Embassy for a response but it came too late for the paper's deadline.

The embassy said it had not seen any communication or received any phone call from the Voice.