“No one should confuse the desire to have dialogue with a celebration marking 40 years of brutality"- US Ambassador to Germany Richard Grenell. 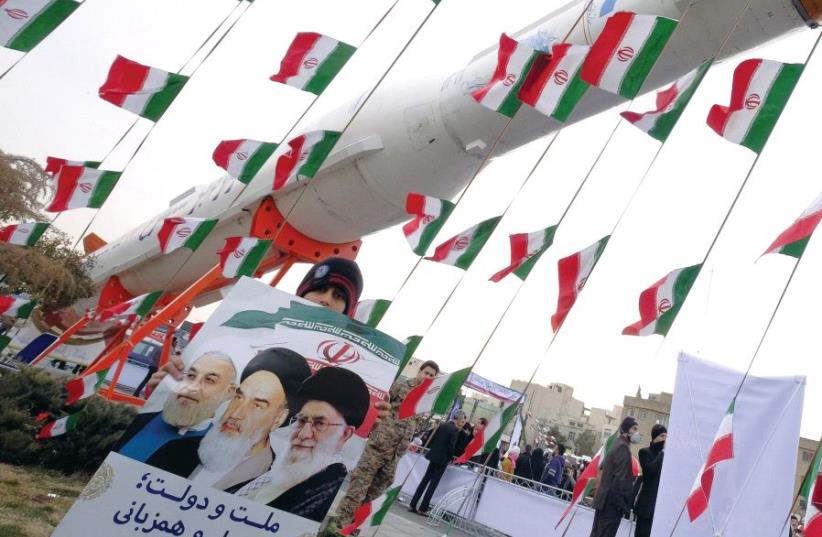 A boy holding a placard with pictures of (left to right) Iranian President Hassan Rouhani, the late founder of the Islamic Revolution Ayatollah Ruhollah Khomeini, and Iran’s Supreme Leader Ayatollah Ali Khamenei, poses in front of a model of a satellite-carrier rocket last year
(photo credit: REUTERS)
Advertisement
US Ambassador to Germany Richard Grenell hammered the German government for celebrating the 40th anniversary of Iran’s Islamic revolution in Berlin.“No one should confuse the desire to have dialogue with a celebration marking 40 years of brutality,” Grenell told The Jerusalem Post. “This sends a troubling mixed message.” In an eye-popping appearance at the Iranian embassy in Berlin last week, German diplomats honored the anniversary of the 1979 Islamic Revolution that created a regime which seeks the destruction of the Jewish state and the US.Niels Annen, minister of state in the Foreign Ministry, and an official from the Iran desk at the ministry attended the pro-mullah regime event, the mass circulation German daily Bild reported. Annen is a member of the Social Democratic Party (SPD) that oversees the Foreign Ministry.Uwe Becker, the mayor and treasurer of Germany’s financial capital Frankfurt, told the Post: “This is not just an unnecessary address of devotion to the Iranian leadership, but a slap in the face of all those Iranians who have suffered or fled under the mullah regime in the past 40 years. Even if one were to take the view that, despite Iran’s support for international terrorism, despite the threats to destroy Israel or despite the recent expansion of the Iranian missile program, it would be necessary to establish greater relations with Tehran, participation in the revolutionary jubilee is almost a self-denial of our own values while looking into the face of Iranian tyranny.”Becker is a member of Chancellor Angela Merkel’s Christian Democratic Union party.A spokeswoman for Germany’s Foreign Ministry justified Annen’s appearance at the celebration in a statement to the Post, saying, Germany seeks to keep “channels of dialogue” open.Germany’s participation in the ceremony honoring Iran’s revolution comes as Tehran’s clerical regime announced it plans to expand its missile system and enhance its military power. The so-called moderate regime of Iranian president Hassan Rouhani has engaged in massive human rights violations, according to critics. Iran’s regime hanged a gay man in January.According to the Canadian human rights organization International Railroad for Queer Refugees, “Today is the 40th anniversary of Islamic Republic of Iran, and every 43 hours [for 40 years] one gay or lesbian was killed in Iran.”Peter Kohanloo, the president of the US-based Iranian American Majority organization, told the Post: “It’s embarrassing that the German government sent representatives to celebrate four decades of the Iranian mullahs’ tyrannical misrule. It also conveys the message that Berlin doesn’t take seriously the US-sponsored Warsaw Conference to confront Tehran nor particularly cares about the fundamental human rights of Iranians. The right policy for Berlin would be to act like an ally and support US efforts to impose stronger sanctions on the clerical regime.”Alireza Nader, the CEO of New Iran, a research and advocacy organization based in Washington, DC, told the Post that “Germany needs to reshape its policy on Iran to reflect reality. The Iranian people don’t want the Islamic Republic, yet Berlin has a close relationship with the regime while ignoring human rights and the regime’s support for terrorism. But worse than all, it pretends that the regime can be reformed. Instead of sticking with the regime, Berlin should start a dialogue with the Iranian democratic opposition and make a complete change in its Iran policies.”Nasrin Amirsedghi, a leading Iranian dissident and public intellectual in Germany, wrote the Post by email:“The appeasement policy of the German government, in particular that of the SPD, has a very long tradition. Today, 40 years after the dehumanization of [the Iranian] people, daily executions (1.7 million prisoners since 1979, the politically persecuted, homosexuals, etc.), the German government continues its appeasement policy, which would not fit in any moral closet.” She added, “How can Germany believe in democracy and freedom, and yet maintain trade relations with the mullahs and Israeli haters? Is that not pure cynicism?”Amirsedghi,who has written about the Iranian regime’s human rights violation, said she is appealing to German and EU politicians to “stop trying to save the mullahs because as long as they are kept alive, Iran continues to be murdered. There is also the time after the mullahs and we Iranians will never forget that.”