US admits at UN: We crossed line on interrogating detainees

US representatives say country should do better in police treatment of minorities. 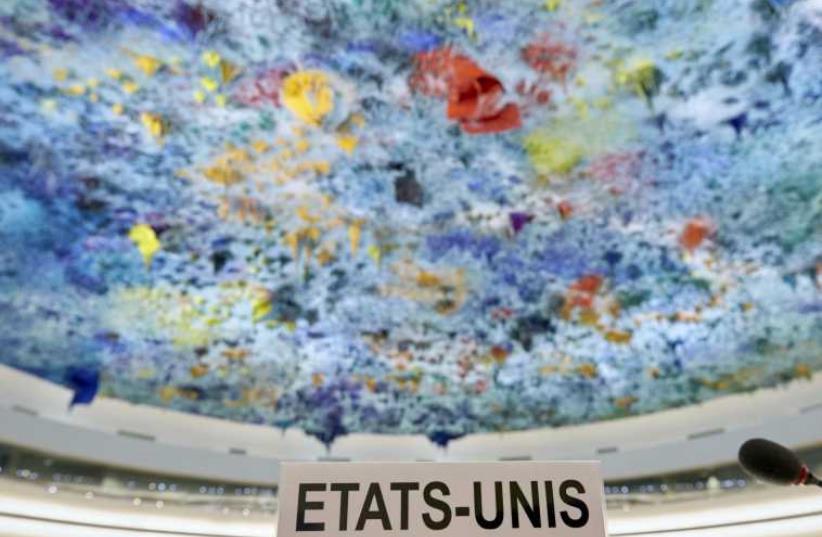 The name sign for the United States is positioned on the podium before the start of the Universal Periodic Review of the US at the United Nations European headquarters in Geneva, May 11
(photo credit: REUTERS)
Advertisement
The US took some hard shots on Monday in the UN Human Rights Council periodic review of its human rights record, admitting that it “crossed the line” and “did not live up to our values” in its interrogation of detainees during the George W. Bush administration.Coming on the heels of a federal investigation into Baltimore authorities’ handling of the police shooting of African-American Freddie Gray, the US representatives, led by Ambassador Keith Harper and State Department Acting Legal Adviser Mary McLeod, also said that it should “do better” in police conduct toward minorities.The UN review – which also addressed the US targeted killings policy, administrative detention and military court issues related to the Guantanamo Bay prison and US National Security Agency spying on people’s emails and telephone calls – also has a strong indirect impact on Israel.A recent report by one of the US’s top law of armed conflict experts, Michael Schmitt, discussed how Israeli national security tactics and doctrines often dovetail American ones, and Israeli officials across the spectrum have confirmed the same over the years.That can mean that when the US is hit with intense criticism for targeted killings or interrogation techniques and rolls back its aggressive posture in those areas, Israel often does the same.The US representatives presented a December 2014 US Senate report on the torturing of detainees during the Bush era and the Obama administration’s rejection of using the techniques discussed in the report as a sign that it had turned over a new leaf on the issue.But the Obama administration never prosecuted the architects of the Bush era enhanced interrogation program, leaving many at the UN and human rights groups dismayed that no real deterrence has been established and that the same issues could recur under a new president.In Israel, the Shin Bet (Israel Security Agency) is regularly accused of torturing detainees despite a 1999 Supreme Court decision banning torture.Groups accusing the Shin Bet of torture say that while the group has abandoned certain tactics, it uses other, less flamboyant tactics that still amount to torture. They claim that a Justice Ministry investigator of the Shin Bet has not and will not indict Shin Bet agents.Certain UN members in attendance called on the US to halt its targeted killings of terrorists via drone strikes, but that issue was surprisingly overshadowed by some of the other issues.The US insisted that it “continued to uphold its international obligations with regard to human rights” as it combated terrorism and showed no hint of halting drone strikes.US drone strikes have provided significant cover for Israeli targeted killings in recent years, but the US has seemed somewhat more circumspect about targeted killings following public admissions of mistaken killing of US civilians in recent months.Regarding Guantanamo Bay, US Brig.-Gen.Richard Jones noted that the number of detainees is down from 242 in 2009 to 122, with 57 designated for transfer, 10 facing criminal charges and 55 eligible for a special periodic review board.The US added that a new live-feed video (with a 40-second delay for classified information) from Guantanamo military proceedings had been initiated.Still, UN officials urged the US to close the prison, as Obama throughout his presidency has said he intends to do.The continued existence of Guantanamo is sometimes pointed to by Israeli officials in support of Israeli military courts and detention.Reeling from a major US federal court ruling last week striking down one of the NSA’s major spying programs as illegal, the US delegation was surprisingly not hit terribly hard for questions about that spying, though it did get some questions.While Israel does not make official statements on the intelligence that its Unit 8200 receives from the NSA, documents from Edward Snowden have shown cooperation between the two, and a rollback of NSA spying would also roll back intelligence provided to Unit 8200.Notably, and of great concern to Israel, in response to calls by multiple states to join the International Criminal Court, the US said it is not even considering joining the ICC’s Rome Statute, even as it backed those ICC actions that coincided with US interests.Israel often cites the US’s refusal to sign on to the Rome Statute as support for its making the same decision – an area of major pressure in light of the ICC’s current preliminary examination of this summer’s Gaza War.Israel’s representative at the UNHRC, Omer Caspi, stayed away from commenting on any of the above controversial issues, sticking to complimenting the US’s human rights conduct or recommending improvements on consensus issues such as women’s rights.