At a Middle East Forum event, experts explain that a new approach to the Israeli-Palestinian conflict is needed. 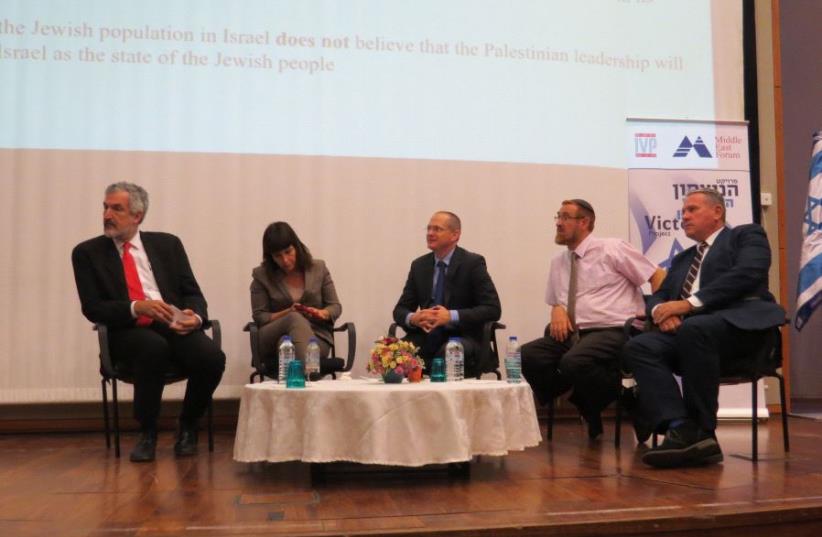 A panel of experts speak at the Middle East Forum's event at the Begin Center, July 2017
(photo credit: MIDDLE EAST FORUM)
Advertisement
The Middle East Forum is putting its money where its mouth is. The neoconservative think tank, which is promoting its Israel Victory Forum project, announced a NIS 1 million Victory Fund Sunday night.The fund is intended for organizations that are willing advocates of the Victory Forum mission which encourages Israeli and American policy makers to approach the negotiating table with a perspective that Israelis are victors in this conflict with the Palestinians.Thus far, the right-wing grassroots organization Im Tirzu’s work on college campuses is one benefactor of the fund. Once more donors come into the fold, more money is set to be allocated to other groups, the forum’s director Gregg Roman said.“We’re not just saying ‘Israel, please think about victory,’ we’re willing to give financial support as well,” Roman said at the Menachem Begin Heritage Center during a panel entitled, “How Can Israel Achieve Victory.”According to Roman, much of the Israeli public would be in favor of such a change in thought. For example, in a poll commissioned by the MEF two weeks ago and conducted by Rafi Smith, out of a sample size of 700 Israeli adults, with a 3.7% margin of error, 67% agree that victory can only be achieved once Palestinians recognize Israel’s right to exist as the national homeland of the Jewish people.At the event, experts from a variety of backgrounds debated why such a paradigm shift is necessary. In attendance were MEF president and scholar Daniel Pipes, Knesset Israel Victory Caucus co-chair MK Oded Forer (Yisrael Beytenu), MK Yehuda Glick (Likud), the former commander of the British Armed Forces in Afghanistan Col. Richard Kemp and former MK Einat Wilf, a senior fellow with the Jewish People Policy Institute and the Baye Foundation adjunct fellow at the Washington Institute for Near East Policy.Jerusalem Post contributor Melanie Phillips and former Post columnist Martin Sherman gave concluding remarks as well.The group spoke about what can be done to prevent what Wilf called the perpetual “battle for mutual exhaustion” between the Israelis and Palestinians.Pipes urged Americans to realize that the traditional approach of land for peace, or Israelis laying down arms in hopes that Palestinians will do the same is a failed approach.“It’s time for the American government to recognize it’s not working. [Former secretary of state] John Kerry put so much effort going into it, and we knew it wasn’t going to work,” he said. “It occurred to me that what I as an American could offer, is an alternative to the current peace process.To say to the US government and to say to the Israeli government, that to take steps to win this war they need to convince the Palestinians that it’s over – they lost.”He gave historical examples to back up his claims, specifically continued Palestinian aggression following every attempt by Israel to offer an olive branch.In order for the approach to get off the ground, support from the public and politicians is necessary, which is why the Knesset Israel Victory Caucus will be launched on Tuesday.Although we are not at war at the moment, Forer accused the Palestinians of still waging a battle against Israel – specifically on the diplomatic front.He cited this week’s UNESCO decision claiming the Cave of the Patriarchs in Hebron as a Palestinian heritage site as another way they are attempting to “destroy Israel.”But this method, too, is in vain. “Boycotting Israel is not a new invention, they tried several decades ago. Eventually, even on the war of isolation that they wage on us, they are losing,” he argued.For MK Yehuda Glick, returning to the Begin Center was a triumphant moment.Shot by an assailant three years ago outside that very site, Glick said his presence last night was a form of victory.He said this new approach should rest on two pillars: a zero tolerance policy toward terrorism, and Israel acting as a humble victor.“We have to get started now,” Roman implored the hundreds of people in attendance and even more watching at home via Facebook Live.This article was written in cooperation with The Middle East Forum.