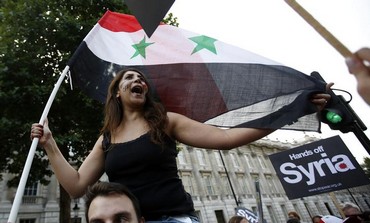 A protestor shouts slogans during a rally against the proposed attack on Syria in central London August 28, 2013. "We are not the war-mongerers," he continued. "We are a peaceful nation seeking stability in the area, because instability will serve only the Israeli interests."Ja'fari went on to assert that the entirety of the Arab spring, including the Syrian crisis, "serves only one goal," which is to distract the world from the Palestinian question. "It has been really unfortunate that for decades to notice that the American diplomacy has always been motivation by defending Israeli interests," Ja'fari said.Reuters contributed to this report.
Advertisement
Subscribe for our daily newsletter