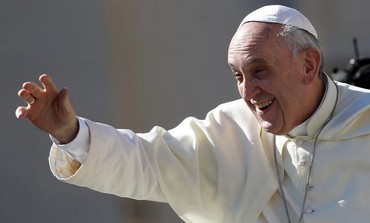 The media hit a new low on Monday when it made a news item out of a mispronunciation by Pope Francis which made it sound as if he was saying a vulgar Italian word.Delivering a speech from the window of his Vatican quarters in which he called for a peaceful resolution to the crisis in Ukraine, the Pontiff used the word 'cazzo' which means 'f***' in Italian, rather than 'caso' which means example. He quickly corrected himself, but not before the video of the slip-up went viral, and was picked up by the media.The Pope, an Argentinian and native Spanish speaker apparently made an error in Italian common to non-native speakers.The Daily Mail quoted his mispronunciation: 'I make a heartfelt appeal to the international community to support every initiative on behalf of dialogue and harmony. A heart full of longing for possession is a heart empty of God. For this, Jesus many times chastised the rich because the risk for them to seek security in the wealth of this world is high. In this f***, in this case the providence of God is made visible as gesture of solidarity."