"It is time for the entire world to insist the Iranian government end its pursuit of death and destruction."

US President Donald Trump addresses the 72nd United Nations General Assembly (Reuters)
Advertisement
NEW YORK – A nuclear deal brokered between six world powers and Iran in 2015 is an “embarrassment” to the United States – one of the worst and most one-sided agreements of its kind, President Donald Trump told the UN General Assembly on Tuesday.In his first address to the international body, Trump saved his most biting criticisms for Iran and North Korea, calling both “rogue states” posing threats to global stability. He suggested bold policy shifts toward both nations are forthcoming.But Trump’s most dire warning was perhaps for the North Korean government calling it a “band of criminals” with a nuclear weapons program that “threatens the entire world with unthinkable loss of human life.”For the second time he called North Korea’s supreme leader, Kim Jong Un, “Rocket Man,” and said he was on a suicide mission in his pursuit of nuclear-capable Intercontinental Ballistic Missile technology.“If [the United States] is forced to defend itself or its allies, we will have no choice but to totally destroy North Korea,” Trump warned.Characterizing the Islamic Republic as an “economically depleted” and “murderous” nation whose main exports are “violence, bloodshed and chaos,” Trump said “the Iranian government masks a corrupt dictatorship behind the false guise of a democracy.”The nuclear deal brokered by the Obama administration, formally known as the Joint Comprehensive Plan of Action (JCPOA), is “an embarrassment to the United States, and I don’t think you’ve heard the last of it, believe me,” Trump continued.“We cannot abide by an agreement if it provides cover for the eventual construction of a nuclear program .“It is time for the entire world to insist the Iranian government end its pursuit of death and destruction,” he added.In recent days, the president has repeatedly suggested he is prepared to alter US engagement in the nuclear accord – possibly by decertifying Iran’s compliance to the deal under US law next month, a move which would allow the US to stay within the JCPOA while kicking off an internal congressional debate over its merits. 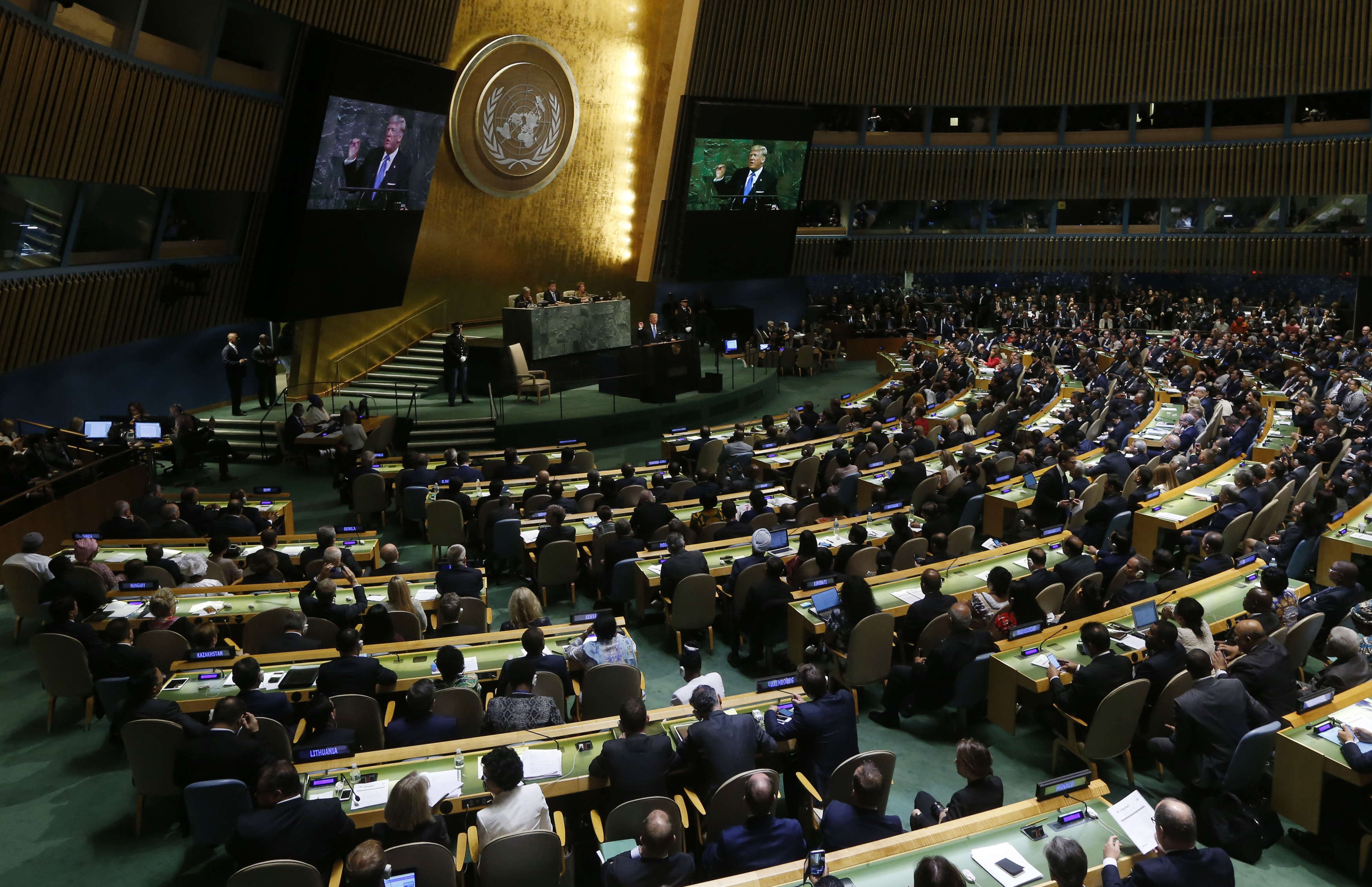 US President Donald Trump addresses the 72nd United Nations General Assembly at UN headquarters in New York, US, September 19, 2017. (Reuters)Trump met on Monday with Prime Minister Benjamin Netanyahu to discuss a path forward with Iran.Speaking with reporters after their meeting, Netanyahu said the Americans are looking for ways to fix the agreement, and that his government offered them concrete proposals to consider.But other parties to the agreement are not playing along. The governments of France, Britain, Germany, China and Russia all believe the JCPOA was a good deal, and plan on preserving it, despite some having concerns with its “sunset years” – the latter part of the accord which allows Iran to grow its nuclear infrastructure to industrial scale.During a meeting with French President Emmanuel Macron on Monday, Trump explained his viewpoint on the JCPOA “and how to curtail Iran’s destabilizing activities in the region,” the White House said. French diplomats in recent days have said they are unwilling to enter a renegotiation of the accord. 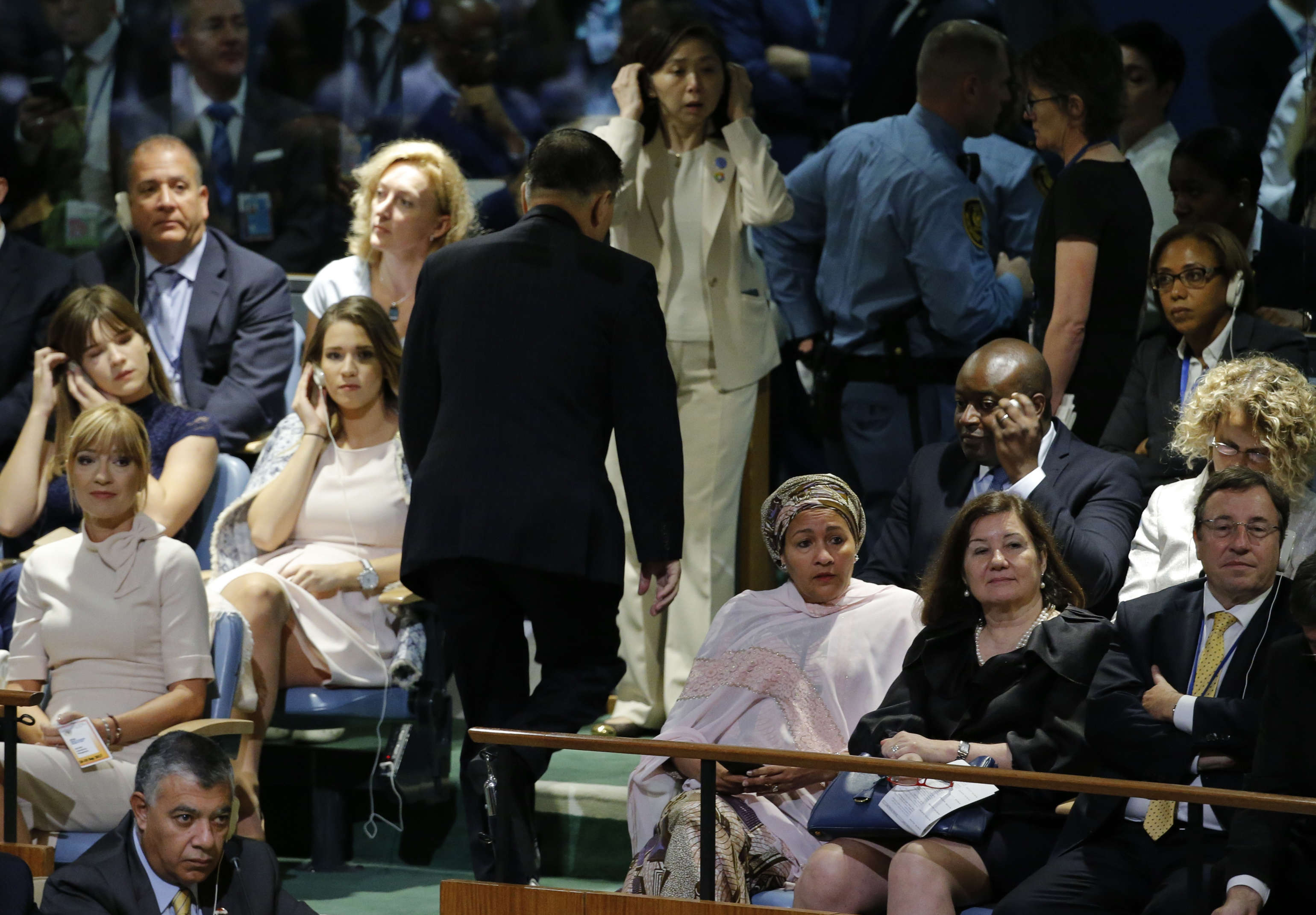 North Korea's Ambassador to the UN, Ja Song Nam, leaves his seat prior to the arrival of US President Donald Trump to address the 72nd United Nations General Assembly at UN Headquarters in New York, US, September 19, 2017. (Reuters)In his speech, Trump noted that Iran repeatedly threatens the destruction of Israel and the US. And he contrasted Iran’s policies toward violent extremist organizations with the evolving policies of Arab states, which he praised as progressive in comparison.He used the term “radical Islamic terrorism” once again in his address, which he warned was a threat to America and the wider world. Trump also said that the forces propping up terrorist organizations were the enemies of his administration.Sitting in the audience, Netanyahu was all smiles.He was joined by his wife, Sara, as well as his ambassadors to Washington and the UN.“In the more than 30 years that I have known the UN, I have never heard a more courageous or sharp speech,” Netanyahu wrote. “President Trump spoke the truth about the world’s imminent dangers and called to stand powerfully against them in order to ensure the future of humanity.”
Advertisement
Subscribe for our daily newsletter