White House warns Gazans: Stay out of 'buffer zone' ahead of protests

The White House issued a statement weighing in of the Gaza protests and warned demonstrators to remain peaceful to avoid further conflict.

Palestinian protesters carry tires to burn them during clashes with Israeli troops at Israel-Gaza border, in the southern Gaza Strip April 5, 2018.
(photo credit: IBRAHEEM ABU MUSTAFA / REUTERS)
Advertisement
WASHINGTON - The Trump administration warned Palestinians in Gaza on Thursday to avoid goading a response from Israeli Defense Forces during planned protests against along the border scheduled for Friday.The protesters plan on burning thousands of tires along the border with Israel, creating a visual for the world of the scale of their protest against the Jewish state. 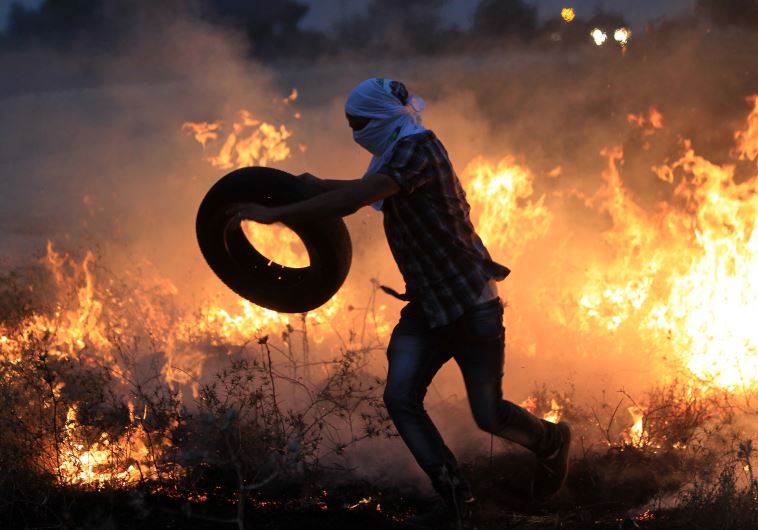 A Palestinian protester throws a tire into a fire during clashes with Israeli security forces. (photo credit: AFP PHOTO)
"The United States strongly urges protest leaders to communicate loudly and clearly that protestors should march peacefully, should abstain from all forms of violence, should remain outside the 500-meter buffer zone, and should not approach the border fence in any way or any location," said Jason Greenblatt, US President Donald Trump's special representative for international negotiations. "We condemn leaders and protestors who call for violence or who send protestors - including children - to the fence, knowing that they may be injured or killed," he continued. "Instead, we call for a renewed focus by all parties on finding solutions to the dire humanitarian challenges facing Gazans."  The statement follows a bout of violence along the same borderline just one week ago, where 15 Palestinian protesters were shot dead by IDF soldiers. Israeli forces later identified the majority of the casualties as known terrorists. That incident drew harsh condemnation from the Palestinian Authority, the European Union, and the United Nations.The US remained largely silent, however, calling on "those involved" to work to lower tensions.Anticipating a similarly tense environment on Friday, Israeli officials have said that Hamas – a terrorist group in control of the coastal strip – is behind the coming protests, as they were last week."#Hamas is planning another round of violence for this coming Friday," Israel's Embassy in the US wrote on Twitter on Thursday evening. "Hamas is aiming for a forcible infiltration into Israel's sovereign territory by launching a mass assault on the border fence and attempting to breach it."

#Hamas is planning another round of violence for this coming Friday. Hamas is aiming for a forcible infiltration into Israel's sovereign territory by launching a mass assault on the border fence and attempting to breach it. pic.twitter.com/qtfzlFjBOr

The Palestinians say that Friday's protests will be peaceful in nature.
Advertisement
Hot Opinion