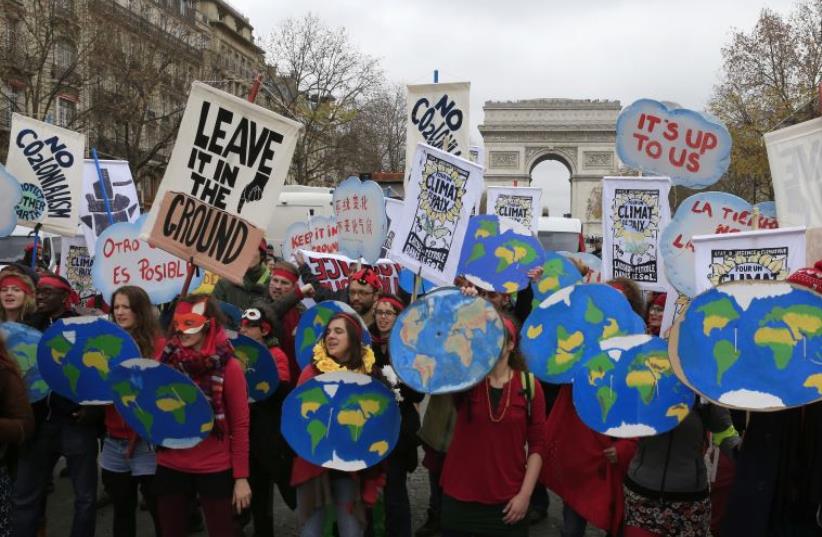 Environmentalists demonstrate near the Arc de Triomphe in Paris, France, as the World Climate Change Conference 2015 (COP21) meets, December 12, 2015
(photo credit: REUTERS)
Advertisement
After nearly 200 countries pulled together to overcome their differences, leaders from around the world adopted a universal climate agreement on Saturday night aimed at minimizing global warming by curbing greenhouse gas emissions.Years of preparation and 12 days of negotiations at this year’s United Nations Conference on Climate Change – also known as the Conference of Parties, or COP – led this weekend to an agreement that COP-21 president and French Foreign Affairs and International Development Minister Laurent Fabius described as “ambitious and balanced.”Fabius, who received resounding applause at the Le Bourget Conference Center on Saturday night, said the accord would mark a “historic turning point” in efforts to thwart the consequences of global warming.Fabius took just minutes to declare the pact adopted to the standing applause and whistles of delegates from almost 200 nations.“With a small hammer you can achieve great things,” Fabius said as he gaveled the agreement, surprising many observers who were bracing for several hours of discussion following two weeks of difficult negotiations.This year’s summit near Paris was the 21st such annual conference to occur as a result of the Rio Earth Summit in 1992, during which countries adopted the United Nations Framework Convention on Climate Change (UNFCCC).Negotiations were scheduled to conclude on Friday, but disagreements on several core issues forced the French hosts to prolong discussions by one more day. Among the key matters of contention were whether global warming must be capped at 2°C or 1.5°C, and the differentiation of responsibilities among developed and developing countries.“It is rare that you get the opportunity to generate a real change in the world. We have this occasion, and we must seize it,” French President Francois Hollande said earlier on Saturday, calling on the 196 delegations to accept the proposed draft.Ultimately, the final, 31-page agreement determines that the temperature increase must be kept “well below 2°C,” but also calls upon signatories to “pursue efforts to limit the temperature increase to 1.5 °C.” This complex phrasing responds to deep concerns by island countries, arguing that a 2°C global warming still threatens to flood their territories and make them disappear.As far as individual national responsibilities are concerned, countries agreed to implement the document “to reflect equity and the principle of common but differentiated responsibilities and respective capabilities, in the light of different national circumstances.”The final agreement determines that countries must “pursue domestic mitigation measures with the aim of achieving the objectives of such contributions.” While developed countries must do so “by undertaking economy- wide absolute emission reduction targets,” developing countries are allowed more leeway but encouraged to continue enhancing mitigation efforts according to their varying national circumstances.The agreement also includes periodic monitoring as to how countries are progressing with implementing their targets, with a “first global stock-take in 2023 and every five years thereafter, unless otherwise decided by the Conference of the Parties.”To help developing countries more effectively battle climate change, the document also determines that prior to 2025, the Conference of Parties will establish a new collective goal from a floor of $100 billion annually. 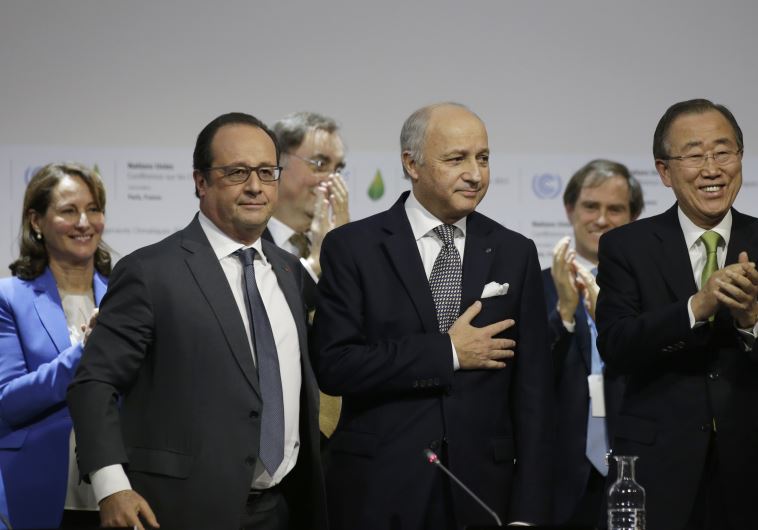 Despite the optimistic words of Hollande and Fabuis regarding the agreement’s historical status, not all are satisfied with it; the “Red Line” coalition combined of several climate associations demonstrated on Saturday in the heart of Paris, near the Arc de Triomphe, against the giant fossil fuel companies.However, leaders from around the world, as well as expressed optimism the agreement would bring about positive change.“Science has won big time,” Sinaia Netanyahu, the Israeli Environmental Protection Ministry’s chief scientist, told The Jerusalem Post on Saturday. “Including the target of 1.5°C global warning threshold in the text sends out a very strong statement of intentions.”Prior to filing its own INDC to the UNFCC, the government in mid-September approved greenhouse gas emissions targets to be met by 2030, among other relevant environmental goals. The Finance Ministry allocated the program an initial budget of NIS 500 million, with additional grants worth NIS 300m. for energy efficiency investments over the course of four years.Israel’s targets involve a 25 percent reduction in its 2005 greenhouse gas emissions by 2030 – limiting residents to 7.7 tons of carbon dioxide per capita. In addition to setting goals for curbing greenhouse gas emissions, the government’s plan involves making renewable energy resources responsible for 17% of the country’s electricity mix by 2030, as well as reducing overall electricity consumption by the same percentage.The targets also include a 20% decrease in private vehicle usage.Israel was hardly a principle player in the COP-21 negotiations, where the big polluting countries such as the US, China and Russia, defended their national interests. India, Brazil and the African bloc also played a major role in the negotiations.Israel is not considered a vulnerable country, in the sense that it is not an island, nor a developing country. From a global perspective, the country is also considered a “small polluter” by virtue of its size – and is responsible for 0.2% of global greenhouse gas emissions.Nevertheless, much like the other summit participants, Israel was requested to provide the UN prior to the COP-21 with target numbers for reducing climate change affects.Looking at the COP-21 agreement as a whole, Environmental Protection Ministry deputy director- general Shuli Nezer told the Post on Saturday that Israel strongly supports the agreement, and agrees with the notion of constant monitoring of its implementation.“At Rio, Israel was still not a member of the OECD,” said Nezer, referring to Rio de Janeiro Earth Summit in 1992. “So formally we were not part of the developed countries. But now, the situation is different. We are part of the developed world and must progress accordingly.Perhaps we are just a small part of the problem, but we can certainly become a big part of the solution.”According to Nezer, Israel is a champion of clean technologies, with more than 300 cleantech companies and start-ups. But on the implementation side, Israel has still a long way to go.“If we want to export all our technologies, we must first implement them at home,” she said.“An Israeli energy market based on natural gas and on renewable energies is a feasible vision.”“Israel should become a ‘beta site’; a real-time laboratory for our innovative technologies,’’ she added.Shaul Meridor, the director-general of the National Infrastructure, Energy and Water Ministry, echoed Nezer’s comments, during conversations with the Post earlier in the week.“The summit provided us with an excellent opportunity to exchange with other European counterparts, and to learn how renewable energies are integrated in other places,” Meridor said.Israel, he explained, will be concentrating heavily in the future on increasing its use of solar energy, a field “in which we already lead globally in research and development.”Naor Yerushalmi, the CEO of Life and Environment – Israel’s umbrella organization for all of its green groups – said the agreement achieved in Paris will be capable of making positive global change.“Will it be enough? That’s another question,” he told the Post on Thursday, as the countries were still deliberating on their final draft.“The main reason for coming here is to see what countries and cities and companies are doing to change the situation – and they are doing it, first and foremost, for economic reasons,” Yerushalmi added.The officials who spoke with the Post were part of a 70-member Israeli delegation to the summit. Prime Minister Benjamin Netanyahu attended the opening ceremony of the convention on November 30, and Environmental Protection Minister Avi Gabbay spent several days at COP-21, as well. Dina Sorek, responsible for economic and scientific affairs at the Israeli Embassy in Paris, initiated two open-to-the public presentations of Israeli green energies and clean transportation technologies.From the Israeli perspective, the climate negotiations also had a political facet. Saudi Arabia had asked to introduce into the texts of the resolution and the final agreement the term “people in occupied territories.” This term was indeed integrated into the preliminary drafts, despite strong Israeli objection.Israeli diplomatic sources told the Post that this wording was eventually removed “following lengthy discussions among Israeli diplomats with American, Canadian and other diplomatic elements.”