Yoga Day: As good for India’s brand as for individual wellness

On Wednesday, the world, including Israel, will mark the International Day of Yoga. 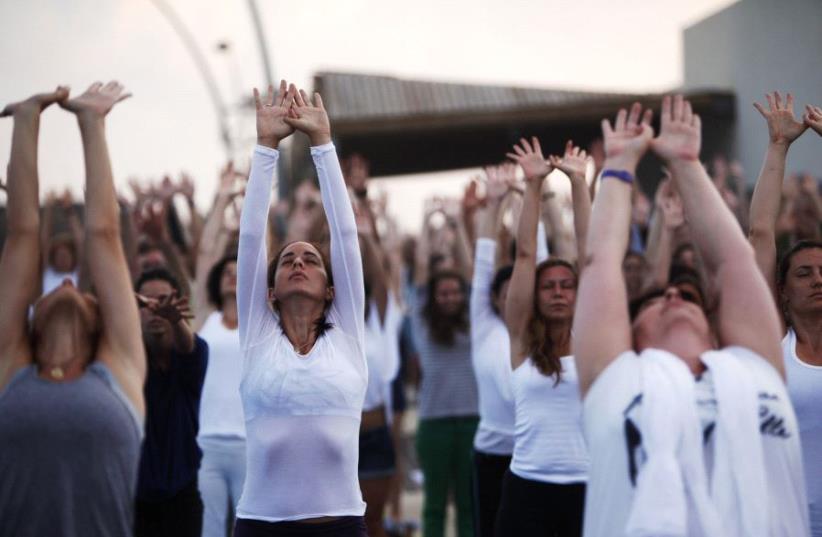 People practice yoga in Tel Aviv [File]
(photo credit: REUTERS)
Advertisement
On Wednesday, the world, including Israel, will mark the International Day of Yoga. And as much as this is a celebration of the practice of yoga, it is also a brilliant exercise in country branding that Israel could learn much from.Thousands of Israelis are expected to attend an event in Rabin Square in Tel Aviv on Wednesday from 6:00 to 11:00 p.m. – the summer solstice – and participate in various yoga exercises and workshops. This is the third time the event, sponsored by the Indian embassy, is taking place, each year getting larger and attracting ever more people.India’s ambassador Pavan Kapoor said it is a very “positive” way for people to “connect” with his country.The impetus came in 2014, when Indian Prime Minister Narendra Modi, a daily practitioner of yoga who in two weeks will be making the first ever visit to Israel by a sitting Indian prime minister, delivered his maiden address to the United Nations just four months after taking office. In that speech he pushed for an international yoga day.“For us in India, respect for nature is an integral part of spiritualism,” he told the world body. “We treat nature’s bounties as sacred.“Yoga is an invaluable gift of our ancient tradition,” he continued.“Yoga embodies unity of mind and body; thought and action; restraint and fulfillment; harmony between man and nature; a holistic approach to health and well-being. It is not about exercise but to discover the sense of oneness with yourself, the world and the nature. By changing our lifestyle and creating consciousness, it can help us deal with climate change. Let us work towards adopting an International Yoga Day.”And adopt it the world body did, with Israel joining together with the 177 countries who a few months later voted to support a resolution declaring June 21 – the summer solstice – the International Day of Yoga.Since 2015, in locations all around the globe – from New York to Nairobi, Tokyo to Toronto – thousands of people gather and take part in yoga activities and seminars, many sponsored by the local Indian embassies and consulates.And this is as good for India, as it is for the minds and bodies of the local yoga practitioners.Think yoga, think wellness.Think yoga, think health. Thing yoga, think harmony. Those are all catchwords that any country – any product – would love to be associated with.Kapoor said the massive participation of people around the world in this day has an intangible, but very positive, impact on how people think of his country.Kapoor said that the first world-wide event in 2015 “created an amazing buzz” in countries where – unlike Israel – yoga is not very well known or practiced. He was India’s high commissioner in Mozambique at the time, and said: “In Africa, where I was, you should have seen the kind of enthusiasm it started generating.”“People associate yoga with India, and that is a very positive thing,” he said. “Because at the end of the day, what is it for? It is for your wellness of being. It is not associated with any religion, it’s just a way to treat your body well, which will hopefully make you feel better.”While there is no tangible way to measure the impact a day like this has on the world’s attitude toward India, Kapoor stated the obvious: “It creates a positive image.” And for all countries, a positive image – a brand associated with harmony and well-being – is an extremely valuable asset.
Are you Marking Yoga Day in Israel? Send us your photos.
via million eyez
via million eyez