Im Tirtzu paid powerful tribute to the reality that Zionism is perhaps the ultimate root and repository of human rights. 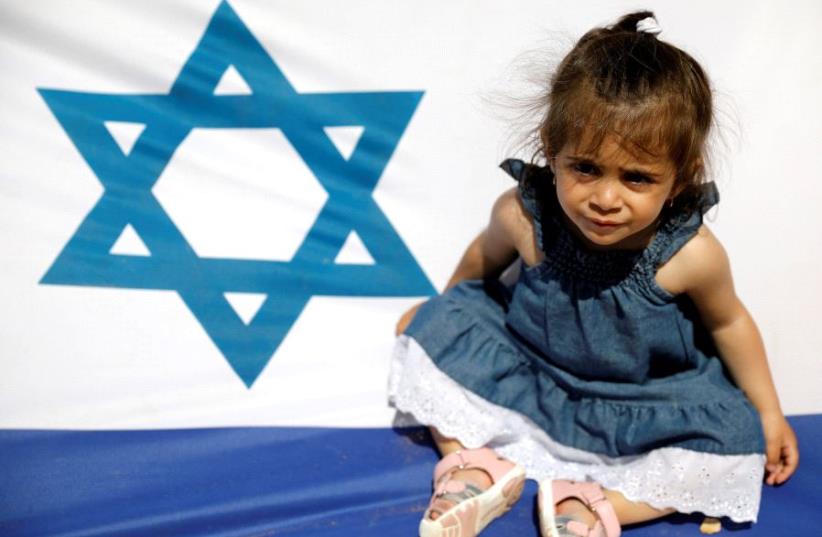 An Israeli girl sits on the national flag during a display of Israeli Defense Forces equipment and abilities, as part of the celebrations for Israel's Independence Day marking the 69th anniversary, in the southern city of Sderot, Israel May 2, 2017
(photo credit: REUTERS)
Advertisement
Human rights have appropriately been prioritized by many NGOs, charities and movements seeking to elevate, ameliorate the condition of people under stress.That’s the good news. The bad news is that human rights, as practiced by so-called HROs – Human Rights Organizations – have become a conversation stopper. They are both a sword and a shield wielded by those whose political actions have often been rationalized or justified as being waged on behalf of certain beleaguered groups; as such, their actions are beyond reproach or analysis, not to mention criticism.Inevitably, this has led to a prioritization of woe and distress. Who has it worse, who is more deserving of our pity and help? When I was a kid in the US, I remember watching a show called Queen for a Day, in which a parade of housewives vied for having the most pathetic story. There was an applause meter based on the individual’s plight, and of course a raft of prizes awarded to the one who tugged most at our heartstrings.The Left’s use of the cudgel of human rights is Queen for a Day writ large. It’s also rather cynical, as one senses that victims are being used to further a political goal. In Israel, those goals inevitably seem to involve usurping authority of the state and the government.Yes, they would say all lives are important, at least in theory; however, in reality, some need to be protected more than others.In practice, this leads to the fracturing identity politics gripping the US, whereby certain groups “matter,” and are thereby deserving, while certain groups are “privileged,” part of the repressive majority, and therefore have no standing, no vote, no voice.The hypocrisy of this perspective is fully visible in Israel, as infiltrators from Africa in south Tel Aviv are wrapped in the protective mantle of being refugees, seeking asylum from certain death back home. Unfortunately, while it’s an effective construct to tag at the heart strings, it’s not rooted in reality.These are people seeking a better life, higher wages, more opportunity. There is nothing wrong with that per se, but the problem lies in the reality of their being here.Leaving aside the mission of Israel to be a haven for the Jewish people (who, if they were of the mindset, could have retired the Queen for a Day title for the rest of time), there are regular people whose lives have been made a living nightmare by the influx of these interlopers.These are not tony Rothschild Boulevard dwellers, sipping mojitos at sidewalk cafes with their Segways parked by their seats. They are poor or working class, regular people, the very people that Israel was conceived for, fought for, and built for. They are the salt of the earth and the backbone of our people.Forget the fact that they should be our highest priority, they are the collateral damage of the required sanctimony and hand-wringing on behalf the often violent infiltrators.Another blatant hypocrisy, a black mark on the honor of the Jewish people, is to see families, destroyed by the wanton, indiscriminate terrorism of murderers, having to scramble to defend the memory of their killed family members, as human rights organizations, heavily funded by European governments, flood the courts with expensive petitions to protect the terrorists.Where is our moral compass? Are we so distanced from our own selves that we have only disdain for our own? A few days ago, at its conference celebrating its 10th anniversary, Im Tirtzu paid powerful tribute to the reality that Zionism is perhaps the ultimate root and repository of human rights. We honored and embraced the activists of south Tel Aviv for their efforts to protect their neighbors, and we reaffirmed our common cause with the residents there.We also honored and embraced our brethren whose lives have been devastated by terrorism, but who insist on sanctifying the memory of their departed by doing all in their power to hold their murderers accountable.For Zionism, human rights is not just about victims. It is also about respecting those non- Jews who are willing to embrace Zionism’s mission, the decency of Israel, and to participate in building our society. So it was the other night, as a large group of Christian Arabs took to the stage to receive an award recognizing their efforts to encourage their fellow Christians to serve in the army and to integrate into Israeli society.Human rights is not the monopoly of the Left, nor of any other ideology. In a Zionist state, human rights concerns should be focused on those who have thrown in their lot with the Zionist mission: to normalize, protect and cherish the welfare of Jews, all Jews; and to be gracious, tolerant and respectful to those non-Jews who see in Zionism their own greatest opportunity for dignity and fulfillment.

Douglas Altabef is the chairman of the board of Im Tirtzu and a director of the Israel Independence Fund. He can be reached at [email protected] gmail.com.