By JPOST.COM STAFF, AP
FEBRUARY 5, 2010 14:19
yang jiechi china fm 311
(photo credit: AP)
Advertisement
China on Friday called for patience and diplomatic efforts with Iran to address Teheran's nuclear ambitions, with Chinese ForeignMinister Yang Jieche saying negotiations with the Islamic republic have "entered acrucial stage."
"The parties concerned should, with theoverall and long-term interests in mind, step up diplomatic efforts,stay patient and adopt a more flexible, pragmatic and proactive policy," Jiechi told a gathering of the world's top defenseofficials in Munich.
The "purpose is to seek a comprehensive, long-term and proper solution through dialogue and negotiations," he added.
Russian Foreign Minister Sergei Lavrov, however, warned Teheran on Friday afternoon that the UN Security Council would discuss the Iranian nuclear program if the Islamic republic fails to find a diplomatic resolution to the issue."We confirmed that if we do not see a constructive answer from Iran, we will have to discuss this in the UN Security Council," Reuters quoted Lavrov as saying in a joint news conference with his German counterpart in Berlin.Earlier Friday, German Foreign Minister Guido Westerwelle told Deutschlandfunk radio that Iran will be judged by actions, not words. 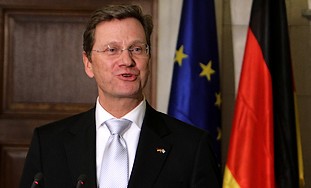 “For the past two years, Iran has repeatedly bluffed and played tricks … it has played for time,” Westerwelle said, according to Reuters, stressing that “we in the international community cannot accept a nuclear-armed Iran.”On Wednesday, European powers reacted skeptically to Iran's offer to send uranium abroad for enrichment, questioning the sincerity of the bid to end Iran's showdown with the West.Iranian President Mahmoud Ahmadinejad had announced Tuesday that Iran was ready to send its uranium abroad for further enrichment, as requested by the United Nations. An International Atomic Energy Agency (IAEA) proposal last year envisaged Iran sending low-enriched uranium to Russia and then to France for processing into metal fuel rods for use in a research reactor in Teheran. Related articles:
'Strike on Iran would not help Israel'
How to save the Obama presidency - bomb Iran
Analysis: Iranian quickstep: 1 step forward, 2 steps back
Analysis: China unlikely to block Iran sanctions
Iran: Moscow gave us guarantee for long-range missilesIt was aimed at lowering international tensions between Iran and the countries negotiating over its nuclear program — the US, China, Russia, Britain, France and Germany.However, in response to the latest offer from Teheran, Westerwelle told reporters on Wednesday that "Iran has to be measured by its actions, not by what it says … it is up to Iran to show an end to its refusal to negotiate.”French Foreign Minister Bernard Kouchner issued a statement dismissing the Iranian proposal as yet another attempt to play for time. A more diplomatic statement by the British Foreign Office said that “if Iran is now indicating that they will take up [the UN proposal], we look forward to them making that clear to the IAEA." "If Iran is willing to revert to the plan agreed upon earlier, we willonly welcome this," Russian Foreign Minister Sergey Lavrov said at anews conference: "We want to verify this information now."Also on Wednesday, Vice Premier Moshe Ya’alon warned that if the Iranian regime continued to pursue nuclear weapons, it would be toppled. Iranian Foreign Minister Manouchehr Mottaki is expected to attend the a major security conference in Munich on Friday evening. The event will open withan address by China's foreign minister — a shift from the meeting'straditional trans-Atlantic focus in a nod to the growing importance ofAsia.
Advertisement
Subscribe for our daily newsletter