US, several European delegations walk out as Ahmadinejad addresses UN.

By ASSOCIATED PRESS
MAY 4, 2010 02:26
Hillary Clinton 311
(photo credit: Associated Press)
Advertisement
UNITED NATIONS — Iranian President Mahmoud Ahmadinejad and Secretary of State Hillary Rodham Clinton exchanged rhetorical blows, engaging in mutual accusations on the UN stage, Monday, as nations gathered for a monthlong debate over the world's ultimate weapons.Speaking from the podium of the General Assembly Hall, Clinton accused Iran of "flouting the rules" of the Nuclear Nonproliferation Treaty with its suspect uranium enrichment program, and said it is "time for a strong international response." 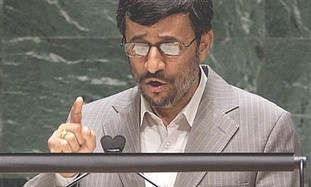 For his part, Ahmadinejad earlier rejected such allegations, saying Washington has offered not "a single credible proof."They were delivering the opening salvos in four weeks of deliberations over how to improve the NPT, formally reviewed every five years in a meeting of all 189 treaty members — all the world's nations except India, Pakistan, Israel and North Korea.The review conference is meant to produce a final document pointing toward ways to better achieve the NPT's goals of checking the spread of nuclear weapons, while working toward reducing and eventually eliminating them.Because it requires a consensus of all parties, including Iran, any formal final decision would be highly unlikely to censure the Teheran government, which would block consensus.Instead, as delegates assess the state of the NPT in UN conference halls, US and European diplomats will be working elsewhere to reach agreement with sometimes reluctant China and Russia on a fourth round of UN Security Council economic penalties to impose on Iran."I hope that we can reach agreement in the Security Council on tough new sanctions," Clinton told reporters, "because I believe that is the only way to catch Iran's attention."In her address, Clinton proposed that the nonproliferation treaty be strengthened by introducing "automatic penalties" for noncompliance, rather than depend on such drawn-out council negotiations.Ahmadinejad to Obama: Set timetable for abolishing all armsAhmadinejad devoted much of his half-hour speech to the huge U.S. nuclear arsenal, denouncing the Obama administration's refusal to rule out the use of those weapons."Regrettably, the government of the United States has not only used nuclear weapons, but also continues to threaten to use such weapons against other countries, including Iran," Ahmadinejad said.He referred to the new US Nuclear Posture Review's provision retaining an option to use US atomic arms against countries not in compliance with the nonproliferation pact, a charge Washington lays against Iran.Ahmadinejad also invited US President Barack Obama to join a "humane movement" that would set a timetable for abolishing all atomic arms, weapons he called "disgusting and shameful."As the Iranian president spoke, the US delegation, of working-level staff, walked out of the General Assembly hall, as did several European delegations, including the French and British.Opening the conference, UN Secretary-General Ban Ki-moon directly challenged Teheran. "The onus is on Iran to clarify the doubts and concerns about its program," the UN chief told the delegates.He called on the Teheran government "to fully comply with Security Council resolutions" demanding that it halt enrichment, which Washington and others contend is meant to produce the nuclear fuel for bombs in violation of Iran's NPT obligations.Later, Yukiya Amano, head of the UN watchdog International Atomic Energy Agency, said his inspectors could not confirm all of Iran's nuclear material is devoted to peaceful activities. He called on Iran to "clarify activities with a possible military dimension."Ahmadinejad, the only head of state participating in the conference, reiterated his country's support for establishing a nuclear weapons-free zone in the Middle East, an Arab-backed idea aimed at Israel's unacknowledged nuclear arsenal of perhaps 80 bombs. He also called on the US to dismantle its tactical nuclear weapons on NATO bases in Europe.

START treaty encapsulates NPT's visionThe treaty is regarded as the world's single most important pact on nuclear arms, credited with preventing their proliferation to dozens of nations since it entered into force in 1970.Treaty members gather every five years to discuss new approaches to problems, by agreeing, for example, that the IAEA should be strengthened. The only countries that are not treaty members are India, Pakistan, North Korea, all of which have nuclear arsenals or weapons programs, and Israel, which is considered to possess an unacknowledged nuclear arsenal.At three of seven past conferences, delegates failed to produce a declaration, including in 2005, at a time when the US administration, under President George W. Bush, was unenthusiastic about arms control talks.Obama has steered the US back onto a negotiating track, including with a new US-Russian agreement to reduce their thousands of long-range nuclear arms. Despite that, Libran N. Cabactulan, the Philippine diplomat who is president of this 2010 NPT conference, said he finds the No. 1 goal of many treaty nations is to press the NPT nuclear powers — also including Britain, France and China — to move more rapidly toward disarmament.
Advertisement
Subscribe for our daily newsletter