By REUTERS, JPOST.COM STAFF
FEBRUARY 11, 2012 11:05
Iranian President Ahmadinejad 390
(photo credit: REUTERS)
Advertisement
TEHRAN - Iranian President Mahmoud Ahmadinejad said on Saturday the Islamic Republic would soon announce "very important" achievements in the nuclear field, state TV reported.He was speaking on the 33rd anniversary of the Islamic revolution. Tens of thousands of Iranians joined state-organized rallies across the country to mark the occasion."In the coming days the world will witness Iran's announcement of its very important and very major nuclear achievements," Ahmadinejad told a crowd at Tehran's Azadi (Freedom) Square in a speech relayed live on state television. He gave no details.Demonstrators carrying Iranian flags and pictures of Supreme Leader Ayatollah Ali Khamenei chanted "Death to Israel" and "Death to America."Hamas Prime Minister Ismail Haniyeh, who arrived in Iran on Friday for three-day trip, also spoke at the ceremony. Haniyeh vowed that the Hamas movement will never recognize the State of Israel and will continue its resistance until all Palestinian lands are liberated. 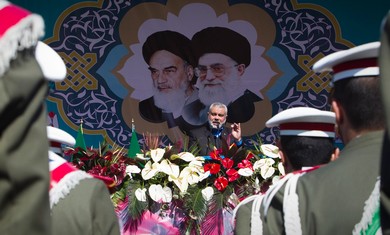 On Friday, Iran pledged to back Palestinian resistance against Israel. "Soon the Zionist regime will be punished for its plots and aggression," AFP quoted Iran's first Vice President Mohammad Reza Rahimi as saying to Haniyeh.
"Iran will not retreat one iota from its position on defending the rights of the Palestinian people," added Rahimi.

Click here for full Jpost coverage of the Iranian threat